If you’re not, you should be.

Rare drafting is a vital strategy if you’re seeking to cut down on your Magic expenses or go infinite. It is a way to help boost the EV of a given draft and make sure you’ll have the money to enter the next draft you want to play in. Going infinite isn’t just about winning drafts, it’s about getting the most tickets(‡) back from each draft.

Rare drafting is best defined as picking a card in a draft for the value it adds to your collection rather than the value it adds to your deck. This could be because you are picking a card that is off color to your deck or picking a card that just isn’t very good in Limited but provides far more value in Constructed formats. If you want to look up a guide for pick order of the cards in Born of the Gods, you can look up ones from Channel Fireball by Luis Scott-Vargas, listen to the Limited Resources podcast, or take a look at the review I did on my blog.

When is it Rare Drafting?

Fortunately, most valuable cards are very strong in Limited. Staples like [card]Brimaz, King of Oreskos[/card], [card]Chandra, Pyromaster[/card], and [card]Polukranos, World Eater[/card] are generally drafted first simply because of the impact they can have in a deck. But sometimes these cards won’t make it in your deck even if they’re in your pool. A strong black and blue deck won’t gain anything from picking up a pack three, off-color card with double color in its casting cost. So if you pick one of the above cards you’re not making a better deck. That doesn’t make it the wrong choice. It just makes it a choice based on another set of criteria.

The question is at what value should you pick a card that won’t go in your deck over one that will. There’s a few very important things to consider in this. First off, there is the cost of the draft. Generally speaking, normal drafts queues cost between 11‡ and 12‡ to enter. Second, there is the prize structure of the event. In a Swiss draft, you can be much more liberal with picking valuable cards over cards for your deck than in an 8-4. In the top eight of a large premier event or a PTQ, you may be looking at a first prize worth far more than any single card you can pull out of a pack. Finally, you need to take into account the value of the card you’re getting versus the card you’d be adding to your deck.

What Drives the Pick?

There is a big difference between rare drafting in pack one, pick one (P1P1) and pack three, pick one (P3P1). Generally, first-pack cards help you find the color you want to play. Almost all cards worth more than 5‡ are both desirable and playable in limited. In your first pack you’re happy to pick up cards like [card]Scavenging Ooze[/card], [card]Hero’s Downfall[/card], or [card]Lifebane Zombie[/card]. But once you’ve settled into your colors, you aren’t going to be adding these cards into your deck if they’re off color. 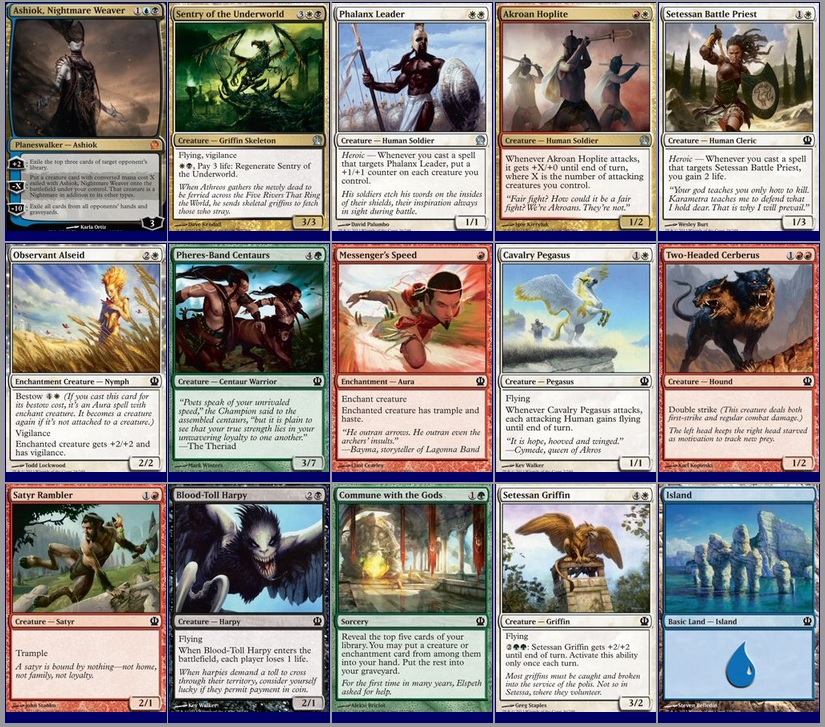 [card]Ashiok, Nightmare Weaver[/card] is a good card in Limited but first picking it will lock you into two colors that this pack provides little of value to wheel. You might see the harpy come back around but there’s no other blue in the pack. On the other hand, you have the safer pick of [card]Phalanx Leader[/card], which is an incredibly powerful card in Limited. It also puts you in whit,e which is a great color to be in. For a first pick, I’d say these two are pretty close. But instead imagine that this is pack three and you’ve got a strong white-red heroic deck built up. Suddenly, the [card]Phalanx Leader[/card] or [card]Akroan Hoplite[/card] are much better picks for your deck. You’re never going to play the Ashiok, and either of those other two cards will fit perfectly.

So what do you do? First, let’s assess cost. We assume we’re in a draft queue (not a PTQ top eight) and paid 12‡.  Second, we assess the prize structure. In a Swiss, each win is worth one pack, Ashiok is worth two. Having the [card]Phalanx Leader[/card] isn’t likely to give us two wins that would have otherwise been losses. In an 8-4, this one card is worth half of the packs we could win by stepping from third to second or second to first. Is [card]Phalanx Leader[/card] the card that will win us most of our games?  I doubt it even increases our chances of winning by 50% in games that it’s played. Remember, half of the cards in your deck generally don’t see play in an average game. So clearly, Ashiok is going to add more value to our collection than [card]Phalanx Leader[/card] is likely to add to our deck.

The line on how much value is worth auto picking is really something you have to draw for yourself. Somewhere in the 3‡ to 4‡ ticket range is generally where most people I’ve talked to end up falling for auto picking in queues. But sometimes you end up not giving much up when you rare draft. [card]Phalanx Leader[/card] is a solid card you may be happy to have in your deck. But you might also be red-green and the best pick you’re looking at is a [card]Two-Headed Cerberus[/card] or [card]Satyr Rambler[/card], neither of which is exciting. 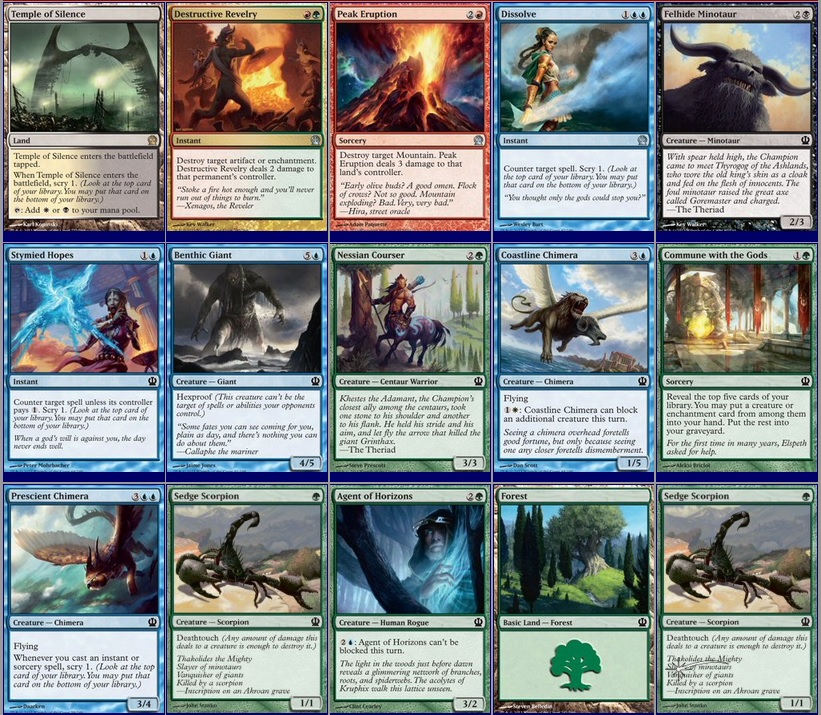 Clearly the Temple is the most valuable card in the pack. But at a buy value of only 1‡, it isn’t a guaranteed pick. each of [card]Agent of Horizons[/card], [card]Prescient Chimera[/card], and [card]Nessian Courser[/card] are strong cards in their colors and [card]Sedge Scorpion[/card] plays a role in any green deck. The question here is much more murky. If my deck is mono-red, I’m taking the [card]Temple of Silence[/card] for value over the possible hate card, [card]Peak Eruption[/card]. In black or white, I’m probably going to play temple for the free scry unless I’m really hurting for creatures and feel the [card]Felhide Minotaur[/card] is necessary just to have a working deck. But in pack one, pick one, I’ve got a number of good choices that will really play into a solid deck in green or blue, or both. The status of my deck so far will determine if I just take the free ticket from the Temple or if I pick a card that can help me win.

When Not to Rare Draft

There are a few times that rare drafting is a bad idea. There are some groups where rare drafting is heavily looked down upon. Rare drafting in the wrong social group can make you a [card]Pariah[/card]. There are also groups and stores that run “Thieves’ Auction” or “Winner Take All” drafts, in which rares are chosen from the entire pool based on the standings at the end of the draft, or the winner just gets all the cards. Big tournaments that include a draft top eight can be a bad time to choose a rare over a card for your deck. In a grand prix, the difference between 5th and 4th is $500, far more value than any single card. Even the difference between 5th and 4th in a premier Sealed event is a massive six packs (18‡ or more). Also, don’t forget that there are phantom events where the cards aren’t placed into your collection, and therefore rare drafting is meaningless.

I’d like to note that I hate having to rare draft. I can’t deny that it is economically advantageous but I always feel like I’m cheating my deck when I grab a card for value over one I’d play in my deck. For this specific reason, I tend to drift towards Sealed or phantom Draft over regular Draft formats. In Sealed, you’re stuck with the pool you’re given so it is a less intense format than Draf,t but you’re never stuck with the decision between a card that is good for your deck and one that is good for your wallet. In phantom, you’re able to pass up the off-color expensive mythic for the common removal. However, I’ve noticed that being willing to rare draft can often vastly increase your EV above the expected value for a given draft. If you are rare drafting and your opponents aren’t, you may see multiple 4‡ to 6‡ cards in that draft. If I can get 14‡ in rares for entering a 11‡ draft, it doesn’t matter if I win or lose, I’ve still come out ahead. Any other packs I win are simply icing on the cake.

@Masticon     -     Email     -     Articles Marc DeArmond is a currently a Middle School Math Teacher and the host of the Casually Infinite podcast. He started playing Magic back in Unlimited during 1993. His interests are trading up in value and playing limited on MTGO. He is the author of Casually Infinite, which discusses how to continue to play Magic Online without spending money. He is currently a Level 2 Magic Judge.
Previous Episode:
The Puzzle Box: User’s Manual
Next Episode:
Modern: Which Zoo for You?