On MTGO, interacting with bots ends up being a mandatory endeavor at some point. While trading between players is often the most profitable, sometimes you need to interact with a vendor with a large number of cards in order to pick up what you need. Bots drive the MTGO economy in very significant ways. We will be looking at how they work, the role they play, and how to best utilize them.

In MTGO, the only place you can directly spend money is at the Wizards Store. Here you can only buy product like booster packs, intro and Commander Decks, and tickets. Tickets can be used to enter events such as Draft, Sealed, and Constructed queues. The MTGO economy is entirely based on these tickets. A ticket’s value is pretty stable because they can always be spent to enter events that provide product and they always cost $1 from the store. While the value of cards fluctuate, they are tracked in their value of tickets. Sites like MTGGoldfish track the value of cards in tickets in the same way that TCGPlayer tracks price in dollars.

These prices are primarily determined by bots. Bots represent the stores of Magic Online. Larger stores like SCG are replaced with MTGOTraders. Software developers allow anyone to run his or her own bot just like a mom-and-pop card shop. Bots are regular MTGO accounts that are operated by automatic software that allow the exchange of cards and tickets. You interact with a bot by opening a trade window and picking the cards you want, or asking it to browse your collection for cards it is buying. Bots run 24 hours per day with the larger vendors running 10+ bots, meaning that up to ten people can be browsing a vendor’s wares at a time.

When you trade with a bot, you are being offered or paying very specific prices for your cards. This is broken down in ticket value to the hundred thousandth (.001‡). If you have more that 1.000 in credit, you can cash out for a ticket. If you don’t, the bot will happily hold onto your credit for you until there is a card you wish to purchase. Large vendors with multiple bots will share credit between their bots, meaning you can buy something from one of their bots and use the remaining credit on another. But credit can’t be transferred from a bot of one company to a bot of another company.

There’s a few things that bots do to the market on MTGO. The first thing they do is play a role in stabilizing the market. If you were relying on the individual online players to determine the price of cards, then prices could fluctuate wildly over the course of a day just based on timezone. The fact that anyone can find numerous different sources to buy a specific card at comparable prices at any time, day or night, provides an effect similar to how cellphones and TCGplayer affect paper trades. I can go and look up what bots are selling a specific card for when deciding how much to trade for it.

While bots stabilize the market, the global availability of cards allows the market to move much faster. During Pro Tour Born of the Gods, prices on cards like [card]Pyromancer Ascension[/card] and [card]Past in Flames[/card] tripled before the end of the weekend. While these cards have been moving in paper, the effect hasn’t been as quick. With global availability of cards, I can purchase a playset of cards and play with them immediately. I can put together and and play the Team Pantheon Storm Deck, played by Jon Finkel and Kai Budde, before they even get into day two of the Pro Tour. If I wanted to, I could sell the cards back before the end of the event. No waiting, no shipping, no additional fees.

The other thing that bots do is control card prices in the market in two primary ways. First off, they push down the cost of cards that aren’t commonly used in competitive play. For example, [card]Traumatize[/card], which has some casual draw, runs about $1.50 to $2 on TCGplayer. On MTGO, it runs 0.051‡. Meanwhile, [card]Shivan Dragon[/card] runs the same 0.050‡ but only costs about $0.29 on TCG. This disparity is caused partially by MTGO being much more focused on competitive play, with people grinding daily events or queues and using the program to test out decks. It also is because of how the ticket/credit structure works.

In MTGO, cards tend to stick around certain prices that are advantageous to the bots. A card selling for 1.012‡ requires a buyer to spend 2‡ in your store. Imagine if instead of giving you back coins as change, your LGS could force you to buy something else or hold your credit for later. Bots frequently keep prices floating around 1.10‡ or jump them to something like 1.60‡. On the lower end, prices will float above 0.76‡, 0.51‡, 0.34‡, or 0.26‡. If a card falls below a four-per-ticket price point, it will generally quickly end up in the 0.03‡ to 0.05‡ range. Since no one needs more than a playset of a given card, any card that can’t be sold for better than four-for-a-dollar, at best, is going to get a vendor a minimum of one ticket anyway. Vendors don’t care if they have to throw in a few other low-value cards to make up the difference.

In spite of their natural position to take advantage of you, bots can frequently be used to make money. My first trade experience in MTGO was buying 10 copies of M11 [card]Time Reversal[/card] at 1.00‡ from one bot and selling them to another bot for 1.10‡. I had to do this one at a time, because I only started with two tickets, but a few trades later, I had three tickets. If you’re going to try to work with bots, please pay attention to the following things:

Buying cards from Vendor A for 1.250‡ each is not basically the same thing as paying 1.255‡ each from Vendor B. While overall the 0.020‡ price difference is fairly insignificant, the fact that Vendor A takes five tickets per playset while Vendor B takes six tickets per playset is quite significant. If you’re buying a playset of cards for 1.02‡ total, you’re actually paying twice as much as if you’re paying 1.00‡ for the play set. When you can buy cards for a good price and leave as little credit as possible, you’re in much better shape than being stuck with a good deal and 0.89‡ in credit at a store you don’t want anything else from. You can also use the advantage of selling cards at even prices to move product. A card may be selling at 1.10‡ from bots, but you can sell it at 4‡ for a playset pretty easily.

2. Take your Tickets – Track your Credit

First off, if you have more than 1.000 credit with a vendor, take tickets. Tickets are always worth more than credit because all bots take tickets. Be careful that bots you’re trading with have tickets available to trade and never trade for credit with a bot that doesn’t have tickets available. It doesn’t matter if you’re offered 64‡ for your [card]Scavenging Ooze[/card], if you can’t cash the credit out for tickets, it is all just [card]conjured currency[/card]. I keep telling myself I should make a spreadsheet with credit at each bot, but at the very least add every bot you have more than 0.010‡ of credit with to your buddy list. You never know when it’ll come in handy if you’re trying to pick up one common you want for something. Being stuck with credit at reputable bots with a good stock, like MTGOTraders, MTGO_Bazzar, and MTGO_Academy, isn’t so bad. But a bot can always close up shop and then your credit will be [card]totally lost[/card].

I don’t know how anyone turns a coin in MTGO without using Wikiprice to one degree or another. There may be other similar sites, but Wikiprice shows the highest-paying and cheapest-selling bots for a given card. It’s not uncommon for there to be a higher buying price at one bot than selling price at another. This is one way you can make sure you’re getting a bigger picture than just what the classifieds are showing you. Sometimes, during a big buyout, the price difference between buying and selling can be multiple tickets, allowing you to make an immediate profit. 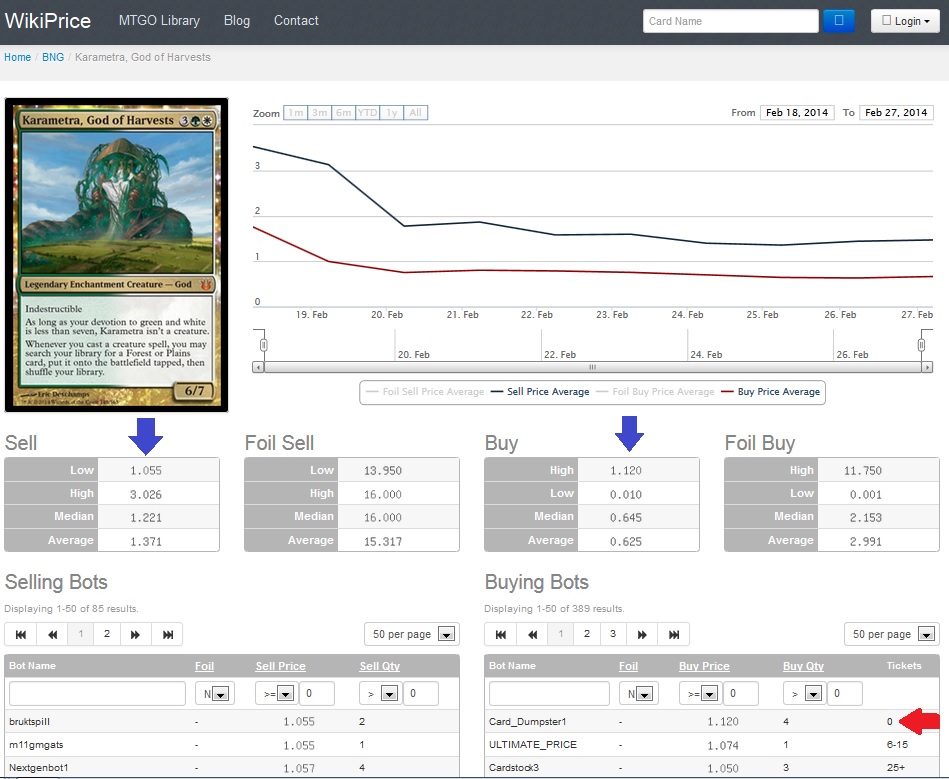 Blue Arrows point out a buying price higher than the selling price. Red arrow points out that the vendor has no tickets available.

4. Don’t Be Afraid to Sell for More Than the Bots

I have, several times, bought cards from a bot and sold them minutes later through the classifieds for more than I paid at the bot. I’ve sold cards for more than bots are currently asking. This isn’t TCGplayer, where if your cards aren’t on the first page they’ll never be seen. Cards listed in the classifieds rarely show more than five to ten sellers, and a number of people would rather just pay the 3‡ for their cards than deal with finding a bot, pay 2.7‡, and figure out what to do with the remaining 0.3‡.

Prices can fluctuate quickly on MTGO. Keeping up with the value of your cards on bots can let you know when to sell them. Don’t be afraid to dump cards to bots when they’re buying. It is often better to sell out to a bot in the hype than try to extract a few more cents by listing the cards on the classifieds yourself. However, when bots don’t have a card in stock, prices can spike because that means people are buying them. It’s pretty easy to set up a tracker on MTGGoldfish for your trade stock and check it to see when prices are rising and falling.

That’s it for today. Have your own MTGO finance tips I may not have mentioned? Please share below!

@Masticon     -     Email     -     Articles Marc DeArmond is a currently a Middle School Math Teacher and the host of the Casually Infinite podcast. He started playing Magic back in Unlimited during 1993. His interests are trading up in value and playing limited on MTGO. He is the author of Casually Infinite, which discusses how to continue to play Magic Online without spending money. He is currently a Level 2 Magic Judge.
Previous Episode:
Weekend Review March 7-9
Next Episode:
Funning For Your Playgroup: Silver-Bordered Cards in White Appropriate for Commander