Six months ago, Pro Tour Valencia was on the scene and it looked like Modern cards couldn’t be any hotter. We were approaching $100 fetch lands and it looked like any Modern card was bound to spike if it saw even moderate play. Corbin has a great article about what has changed over on Quiet Speculation, and in many ways, the future looks bleak. It’s now Modern PTQ season and we should be seeing the continuation of prices that have been growing all year. Instead, prices seem to be rapidly dropping. This poses the question: is there still any money to be made in Modern?

Over the next month, Modern season will be wrapping up, and the next Modern Pro Tour is months away. We’ve seen this year’s core set and the inclusion of pain lands in M15 gives us no indication that fetch lands will be seen in the near future. We’ve already seen the summer releases for this year, which means that Modern Masters 2 is a year out at best. Most Modern staples are going to be dropping over the next six months. 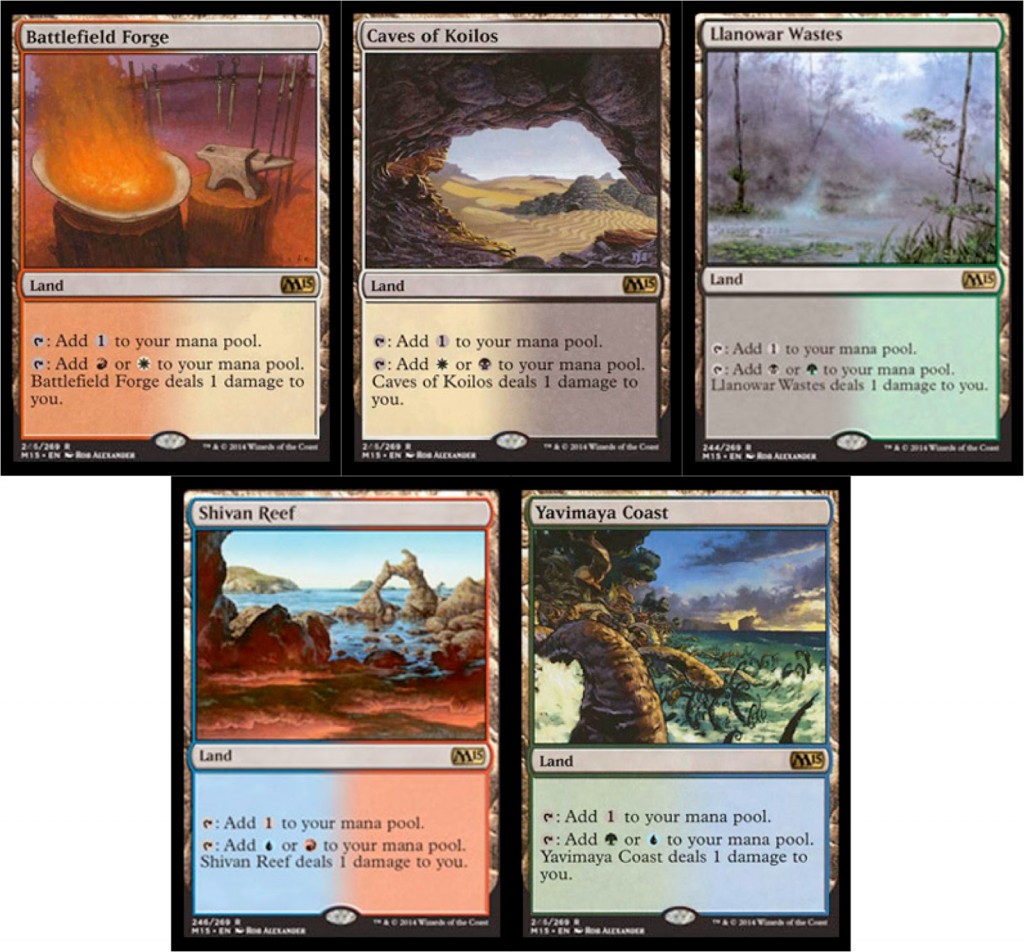 I fully believe that Wizards wants to keep Modern as an accessible eternal format with a variety of deck options. With the exception of roving and somewhat unpredictable bans and unbans, cards that are staples of the format are not likely to be going anywhere. Even with huge numbers of Pod and Twin players, we’re seeing them get beat out by Jund, American Control, and Affinity often enough that any drastic changes to the metagame seem unnecessary and unlikely. With a healthy metagame, in order to keep Modern accessible to players, it is in WOTC’s best interest to keep the prices down by reprinting cards, which is the point of the format overall. This means I’d be very concerned if I was holding any of the high-priced staples of the format.

I feel the current depreciation in the value of Modern cards is due heavily to the lack of available fetch lands. Nothing says a format is not for you like spending $200 on real cards and $1000 on lands. This means, as I’ve mentioned before, that fetch lands will be reprinted. I don’t believe that the Modern format can survive a wait any longer than the 2015 fall expansion to do so. If I’m planning to invest in Modern, I’m only going to be looking at cards I expect to fly off the handle with a flood of fetch lands and cards that I’m willing to hold on to for over a year. There’s going to be a key time in six months to pick up your staples that have staggered and dropped in price, but there’s still some things out there now.

So What Do I Buy?

The place I still encourage putting your money is in shock lands. While they have been a good buy for the past year, the fact that they have increased to about $10 each from their previous lower price points puts a lot of people off. There are a few things we can expect with regards to shock lands. First, they won’t be reprinted any time soon. They had a good healthy printing and are available for anyone that wants them for an affordable price. They’re no longer being printed and the only remaining point at which there is any possibility of a price drop is at rotation. While people may well be shedding the cards from their Standard decks, I think it is more likely they will simply move them over to Modern decks. I think there won’t be a big flood in September and we’re more likely to see prices rise than fall over the next two months.

Once rotation is done, the only trajectory for shock lands is up. Anything that draws people to Modern will cause a steep price jump on shocks. Remember, [card]Steam Vents[/card] was a $25 card before Return to Ravnica was announced. While it probably isn’t going to hit that point again any time soon, I can see $15 to $20 late next year. If we see $10 fetch lands, it could easily result in $20 shock lands. In fact, right now is a good time to pick up pretty much anything from RTR block or M14 with eternal playability that doesn’t have a big home in Standard. This includes [card]Voice of Resurgence[/card], [card] Abrupt Decay[/card], [card]Scavenging Ooze[/card], and [card]Archangel of Thune[/card].

I’d advise waiting until rotation on cards like [card]Sphinx’s Revelation[/card] that see heavy Standard play. Azorious/Esper control is going to take a massive hit at that time. But [card]Supreme Verdict[/card] is surprisingly cheap right now, and you’re unlikely to see a better sweeper, ever. However, very few other RTR block cards seeing play in Standard are eternally playable.

Unfortunately, that’s about it in Modern right now. It seems pickings are pretty slim, but I think there’s still money to be made if you’re willing to look a year out. The final thing I’d keep an eye out for is those Duel Decks and Fat Packs going for 50-percent off in the late summer. If you can get Fat Packs for $20 and Duel Decks for $10, you’re generally able to turn a profit pretty quickly.

@Masticon     -     Email     -     Articles Marc DeArmond is a currently a Middle School Math Teacher and the host of the Casually Infinite podcast. He started playing Magic back in Unlimited during 1993. His interests are trading up in value and playing limited on MTGO. He is the author of Casually Infinite, which discusses how to continue to play Magic Online without spending money. He is currently a Level 2 Magic Judge.
Previous Episode:
C(ube) + C(ommander) Magic Factory #9 – Disruption in EDH Part 2
Next Episode:
SCG Worcester Report – 14th Place with Boros Burn by Timothy Mezoff

2 comments on Casually Infinite – Where’s the Money in Modern?