You either die a hero or live long enough to become the villain.

When I began playing Commander, [card]Azami, Lady of Scrolls[/card] was the bane of my card store’s existence. To this day, it’s her fault that all infinite combos in that store have been eliminated and why I’ve stopped going there.

Before she got combos banned at that store, I got fed up with losing to Azami, and decided to try the deck out myself.

I could see why everyone wanted to play it. The deck was super consistent and easily won out against huge pods of player, even when ganged up on.

The deck is a pure mono-blue combo/counter deck. You play a bunch of wizards, draw a bunch of cards, and win. Simple as that. 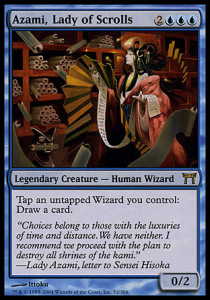 [card]Azami, Lady of Scrolls[/card] is our Commander of Choice due to the fact that she provides the most advantage for her cost. At 2UUU, she at a minimum will draw you 1 card per wizard as long as she resolves – which is not difficult to due between [card]Cavern of Souls[/card] and all of our many, many counterspells.

While it’s also a combo/counter deck, by it’s very nature it’s a wizard tribal deck, as well. They’re all pretty solid plays, either giving us more ways to draw cards or giving us utility until Azami hits the board. 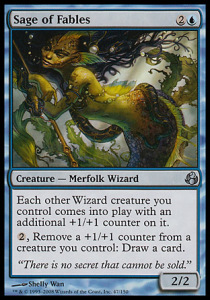 [card]Glen Elendra Archmage[/card] is a fantastic card due to the fact it’s not one, but two or more counterspells on the same card, especially combined with [card]Sage of Fables[/card]. Since [card]Glen Elendra Archmage[/card] dies and comes back with a -1/-1 counter, and [card]Sage of Fables[/card] causes Wizards to come into play with a +1/+1 counter, Glen Elendra can sacrifice itself as many times as it wants and keep coming back.

[card]Sage of Fables[/card] also adds some more utility to the deck. It makes our usually tiny creatures a little bigger, and gives us the option to draw a bunch of cards in addition to Azami’s insane draw power. 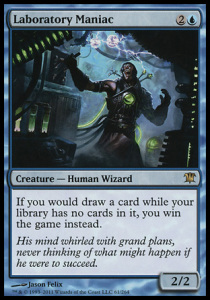 [card]Laboratory Maniac[/card] is one of our main win conditions. It’s very easy to draw your entire library with this deck, and it’s a solid play against people that really want to play mill with [card]Mirko Vosk, Mind Drinker[/card] or [card]Phenax, God of Deception[/card]. 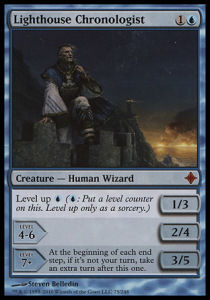 [card]LIghthouse Chronologist[/card] is the most expensive creature card in the game with Level Up, and for good reason. While he doesn’t do anything special until level 7+, when he does get there it’s well worth the 1UUUUUUUU mana that he ends up costing in the end. After every turn that isn’t your turn, you get another turn. While this isn’t a huge effect in 1v1 (though you still get two turns in a row constantly) in multiplayer, you get a turn after every other player’s turn – giving us access to 4 or 5 extra cards and land drops against all of your opponents. Of course, he’s still easy to get rid of – even at level 7 he’s still only a 3/5, but you have counter magic to keep him on board for long enough to matter. 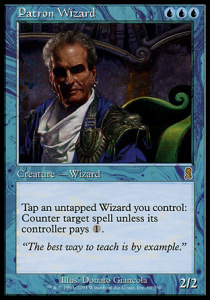 [card]Patron Wizard[/card] is probably one of the best wizards in the game. When Azami isn’t in play, this guy is the big player – countering spells or at least adding taxes is ridiculous when it’s scalable to the number of wizards you control. 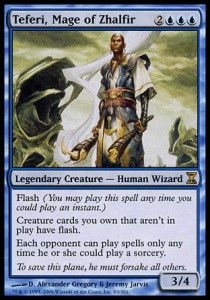 [card]Teferi, Mage of Zhalfir[/card] shuts down your opponents during your turn, letting you just combo off without too much interruption if he’s in play. Alternatively, you can play him as your Commander if you’d rather go with a more control-oriented build rather than the combo build that I’m suggesting. You can just add cards like [card]Erayo, Soratami Ascendent[card], [card]Arcane Laboratory[/card] or [card]Knowledge Pool[/card]. 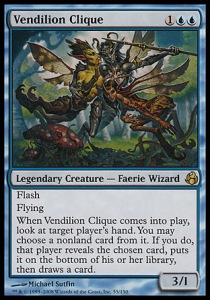 Personally, I haven’t gotten a chance to play [card]Vendilion Clique[/card] but the value is clear. 1UU for a 3/1 Flash and Flying wizard lets you get rid of immediate threats in player’s hands. It’s better in 1v1 than it is in multiplayer. If you  have one, play it. If not, it’s not necessarily worth the investment for this deck.

The counterspells are probably the most important thing in the deck – it protects all of your combos, and keeps your opponents from winning in the mean time. 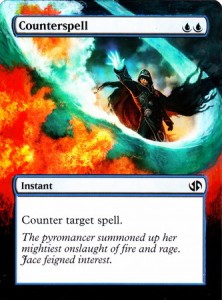 Permission spells aren’t nearly as powerful in multiplayer, so we generally stick to Hard Counters. 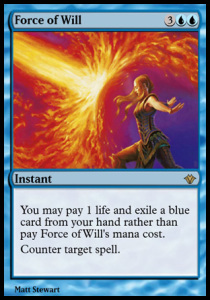 These are spells we can actually play even when we’re tapped out, which is perfect for protecting yourself long enough to win the game. [card]Foil[/card] is another option, but i personally don’t play it due to being strictly worse than [card]Force of Will[/card]. 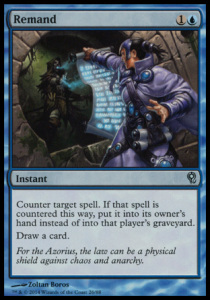 While tuck is no longer nearly as powerful as it used to be due to not tucking Commanders any more, sometimes you just need to get rid of something permanently, or at least make your opponent waste a tutor to get it back. [card]Remand[/card] is probably the best card here – at just 1U to counter a spell for a turn, it’s pretty solid seeing as it always draws you a card.

Of course, the entire purpose of the deck is to combo out and win. Azami supplies us with the card draw to give us answers and draw us into our combos. 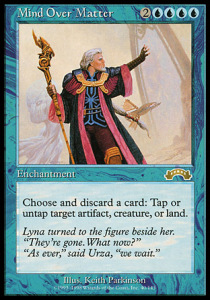 This one is pretty simple – [card]Azami, Lady of Scrolls[/card] draws you a card, and you discard that card to untap Azami with [card]Mind Over Matter[/card], and then tap to draw another card, etc. Then, you either win by swinging with a gigantic Azami with [card]Diviner’s Wand[/card] or win by drawing your entire library with [card]Laboratory Maniac[/card] on board. 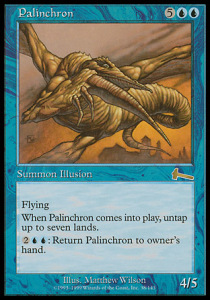 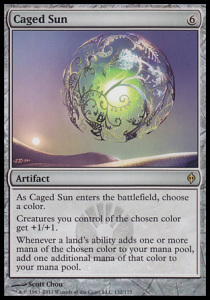 [card]Palinchron[/card] is another one of those cards that automatically draws hate due to existence of this combo. [card]Caged Sun[/card], [card]Extraplanar Lens[/card]. and [card]Gauntlet of Power[/card] are the easiest way to do this. [card]Nykthos, Shrine to Nyx[/card] also works this this, as long as you have 7 lands including Nykthos plus having a devotion to blue of at least 6. This is pretty easy in a mono-blue deck with a lot of cards that have 2 or 3 colored mana symbols.

Once you have infinite mana you can play whatever you want. [card]Diviner’s Wand[/card] easily wins you the game at this point. 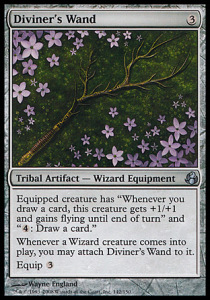 In addition to being a Wizard, [card]Diviner’s Wand[/card] is one of your win conditions once you get infinite mana. You can draw as many cards as you want for 4 mana each, and that creature gets +1/+1 and flying for each card you draw. 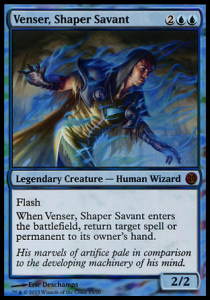 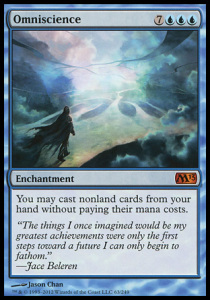 [card]Venser, Shape Savant[/card] is one of those cards that breaks the rules of normal magic. Instead of countering a spell when he comes into play, he returns a permanent or a spell to it’s owner’s hand. Generally Wizards doesn’t print cards that actively interacts with the stack, but they made an exception with this one guy from Future Sight (aside from [card]Lightning Storm[/card] – that card is an active attack on the stack, and that was Coldsnap and not Future Sight). As [card]Omniscience[/card] lets you cast anything for free, you can use Venser to bounce himself back to your hand. In response to his triggered ability, you tap him with Azami’s draw ability, allowing you to draw your entire library by just repeating this process, and all at instant speed during any player’s turn. Again, this wins you the game with Laboratory Maniac.

In addition, this combo also turns [card]Patron Wizard[/card] into a hard counter for every single spell your opponent’s play – And Venser himself can [card]Remand[/card] uncounterable spells. 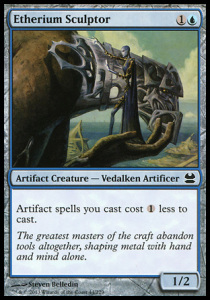 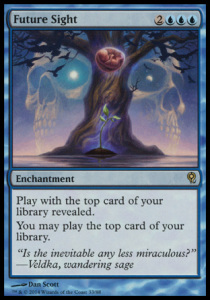 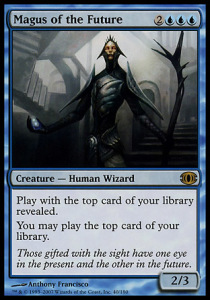 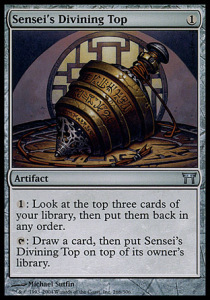 This is one of the more obscure combos that I personally like playing because I generally play all of the cards regardless. [card]Future Sight[/card] hasn’t always made the cut, but [card]Magus of the Future[/card] always does in this deck for me at least. [card]Etherium Sculptor[/card] decreases the cost of all of your artifacts by 1, which makes [card]Sensei’s Divining Top[/card] free. With [card]Future Sight[/card] or [card]Magus of the Future[/card], you get to play Top for free from the Top of your deck after tapping it to draw a card.

If you like winning and being the only one having fun, feel free to try out Azami. Also, if you like playing Solitaire at your desk alone, try building Azami. Otherwise, stick to someone a little more friendly if you have a more casual play group.

David Rowell is just your average Commander player - has way too many decks built and all of his value is sitting in them. His favorites include Narset, Sedris, and Mayael. When he isn't playing or writing about magic, he's working as an assistant manager for Dollar Tree - got to have something to pay for that Magic habit.
Previous Episode:
Pitt Imps Podcast #117 Will Will Be Walking
Next Episode:
Tournament 2-for-1