Welcome back, conjurers of currency! Pro Tour M15 was several days ago, but I’m writing this on Sunday afternoon, so any financial information that arises between now and Tuesday night is something that won’t be discussed until next week. Anyway, let’s do a quick rundown of some of this week’s winners. We haven’t seen spikes like these in months.

Winners of This Week 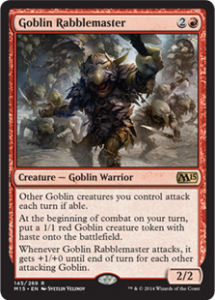 “I keep getting excited about this guy, then realize that he just sends the hasted token he made to its death. Kind of sad. Anyway, that’s one of the more prevalent reasons that he’ll be sitting in my $.25 box in September if I can’t dump off the one I own now. Predicted price: Bulk rare.” –Douglas Johnson, two weeks ago.

Oops. Well, then. I’m glad I didn’t find a way to get rid of the one I ripped open at my prerelease, I guess. If you didn’t check your MTGstocks recently, this guy jumped to $4 on the back of several brutally fast and efficient red decks that reared their heads last weekend in Portland. I think my biggest mistake in failing to predict this card’s price was not taking into account the Standard playability, only associating tribal mechanics with eternal and casual playability. [card]Mental note[/card]: Consider all tribal possibilities in Standard when new lords are printed

If you still have them, or managed to buy out a chunk of the internet or your LGS at a dollar or less, I recommend dumping them now. [card]Legion Loyalist[/card] also saw a a bit of a bump this weekend, and these two cards happen to work extremely well together. Loyalist jumps the Standard boat in a few months, and I’m not expecting Khans of Tarkir to be loaded with the tools for goblin tribal to be a thing in Standard. There’s more risk than reward here involved with holding onto Rabblemaster for a long period of time. 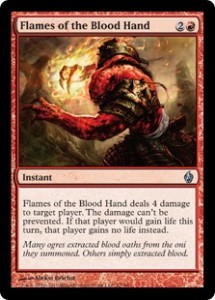 Doubling to be one of those $5 [card]Serum Visions[/card] or [card]Path to Exile[/card] non-rares, it looks like the supply was just incredibly low and not enough people noticed until there were almost none left. I’m sure that a bunch of people were scrambling around at Modern PTQs looking for the card and none of the dealers had any. The only printings were Betrayers of Kamigawa and the PDS Fire & Lightning deck, so I think the price is here to stay. What other Modern commons and uncommons of this power level do you think could see a price increase? 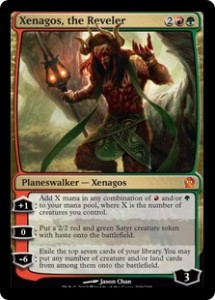 Looks like Xenagos wins the award of “most number of copies of a Planeswalker in the top eight of Pro Tour M15.” He hasn’t spiked yet, and he’s only $8. Something doesn’t seem right about that, and it kind of reminds me of the situation where [card]Jace, Architect of Thought[/card] was sub-$10 until his second year of Standard, when he reached $20 to $30. Yes, Xenagos is multicolored, but he wins the game on his own if left unanswered, and I think there’s room for growth by picking these up now.

Here ends the Magic, and begins the Finance

Anyway, let’s get to the real point of this week’s article. I’m sure you’ve already heard this at least once in a college economics class, but allow me to repeat it for the sake of the article and financial stability in general: keeping a viewable record of where your money goes in and out of your life is extremely useful. It lets you plan ahead, know your limits, and budget such that you’re not stressing out over money issues. The meat of this week’s Conjured Currency will be used to show you my own personal method of keeping track of my finances (Magic and non-Magic alike), and put the spotlight on a couple of alternate methods.

As a college student, Google Drive is one of the best things to ever happen to me. I can write papers without having to worry about losing my work, because everything is saved automatically. It’s simple, easy to navigate, and can be synched with your laptop and phone. I’m writing my article on Google Docs right now, and I’m going to paste it into WordPress for Danny to hack away at. Similarly, I use Google Spreadsheets to keep track of every single financial transaction I make. I have one sheet for all income in a single month, and another for all spending in a single month. Here’s a look at my August sheet: 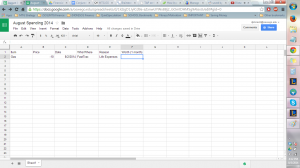 I have a row for each transaction, and a column for descriptive factors about the purchase or instance of income. Every purchase is marked with a reason, so I know to think twice next time when purchasing the same item if I wrote down a stupid reason like “candy” or “impulse purchase.” It took a little while to get in the habit of doing all this, but it’s well worth it in the long run. At the end of each month, I go back and read through each transaction in the spending spreadsheet, and mark whether or not it was worth spending money on. In July, I spent a bit too much money on unnecessary snacks or junk food, so I’m making an active attempt in August to prepare lunch ahead of time if I’m going out, or bring a water bottle instead of buying one.

This method has also saved me a lot of money when I make a trip to a grand prix or other large-scale Magic event. After recording each individual expense from the entire trip to Grand Prix Richmond, I now have an approximate budget for future, similar trips. I know exactly how much of my monthly income is available to spend on singles at the dealer booths, how much is allocated for food and drink while I’m there, and I noted the names of all of the restaurants we ate at so I can compare prices next time.

If you’re looking for a fast and easy way to get a general visual indicator of where you put your money and why, this is what I recommend. You don’t have to spend hours on the computer setting it up, looking at graphs, or syncing various bank accounts up to your applications. I always keep a pen and paper on hand, so I just scribble down “+” or “-” a number, a date, and an item, or if I have time I can input it to my phone immediately. It’s just a quick way to realize that you spent $50 more than you needed to on food last July, and recognize to tone that down in August.

Although I’ve never used this one personally, I asked around on Twitter and the review was universally positive. Unlike my Drive spreadsheets, it allows you to look at each individual category that you create, and gives you neat little pie charts and percentages of where your money is going. Apparently it also has the ability to synchronize with several larger credit unions. You can set timers to trigger on your phone or computer when you need to pay bills, notify you of fees, and warn you when an account is getting low. It lets you keep track of your investments (but probably just stocks, not Magic cards), budget your funds, and so much more. The best part about it is that it’s free! Based on a quick look over the website and reviews I got from users, I might have to start using this myself.

Based on my quick run through of the website, Mint.com is for those who want absolute control over every single part of their financial lives. Don’t take that the wrong way, it’s a great thing. I might start using this considering how obsessive I can be about saving and making sure I know exactly where every penny goes.

You Need a Budget

Well you do, but the program is actually just called “You Need a Budget.” While Mint is free, YNAB costs $60. Yeah, yeah, it’s spending money on a program that’s supposed to help you keep track of your finances and save you money, but I still figured I should mention the fact that it exists. As a matter of fact, if you’re a college student (and can prove it), the program is free, which is why I’m currently trying it out. You start out by inputting the amount in each of your various accounts (cash on hand, checking account, savings account, etc), and then just record each transaction like the other programs, from X account into Y payee.

You can also create a payment calendar for scheduled bills and future payments, which is easier to manipulate and keep track of than what I do now (Google Calendar). Although I’ve never used them, the program also comes with online classes to teach you how to use and make the most out of YNAB, handling credit cards, and working with variable incomes. Some of the classes are free without having to buy the product, and there’s also a trial version if you just feel like testing the waters. Overall though, I wouldn’t just drop $60 on the program without a pre-existing routine of keeping track of your money. The last thing you want to do is purchase it and realize it’s not for you.

There’s only so much I can go over in one article, but the fun doesn’t have to stop here. Are there any popular budgeting applications that you use that the world should know about? Are there any features in the ones I did spotlight that everyone should be aware of? Leave a comment or hit me up on the social media, and let’s have a talk this week about personal finance and budgeting control.

@Rose0fthorns     -     Email     -     Articles Douglas Johnson is a 20-year-old MTG player who goes to college courtesy of a scholarship from Gamers Helping Gamers. He is currently found writing a weekly finance column at MTGprice.com, and you can always feel free to contact him on Twitter, Facebook, or Reddit.
Previous Episode:
Pitt Imps Podcast #80 — So Much News
Next Episode:
Brainstorm Brewery #110 – Finance 110