Good afternoon and/or Evening! (See what I did there? Go put last week’s article in your face if you didn’t read it, and you’ll understand the clever use of introduction that I managed to pull off). Last week we talked about the reprinting of fetch lands, and some of the financial side effects that they’ll have. If you’re wondering when to grab your set of Khanslaught (that phrase is patented by Jason Alt) fetches, or what to do with your original allied fetches, I recommend smashing that link and giving the article a quick scan, because we’re jumping into a completely different topic today.

As a college student, my primary weekly Magic fix is provided every Tuesday night, when a bunch of players get together to trade, play, and have a jolly good time. We don’t really have an organized play structure, but I’m graced with being the go-to guy for singles and selling cards. As usual, my goal is to constantly buy, trade, and sell cards, and use Magic as a primary source of income, while making sure the other party is happy with the cards (or cash) that they receive at the price I give them. At our last meeting, I completed a transaction that I believe warrants an entire article (or at least most of one. We’ll see where this goes).

It’s the start of a new school year, so we got a lot of new faces at our first meeting. As one individual flipped through my binders, he made a comment about how I had a bunch of stuff he was interested in, but he doubted that I would feel the same about his collection. After learning that he had a Modern UWR Delver deck completely up for trade, I told him that I’d be happy to trade for pretty much anything in the deck across the board at TCG mid. We made several trades involving fetch lands, [card]Vendilion Clique[/card]s, and other Modern staples, and then he got to my land binder, where he found my collection of dual lands. 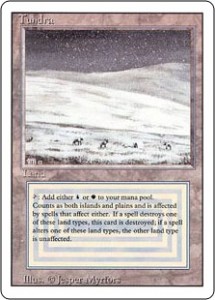 He looked longingly at the [card]Tundra[/card]s and [card]Tropical Island[/card]s, and said that he wished he could afford them (don’t ask me why he thought that, his collection was better than he believed). Even then, I’d probably never trade them. Nobody ever wants to trade their dual lands unless they’re for other Legacy staples, right? At one point, he made a half-joking comment about trading two pretty large boxes of rares for just one dual land; Tto his surprise, I didn’t immediately shoot him down. I told him that it’s entirely possible, I just had to count how many rares he had, and do a quick estimate to see if it was worth it to me.

After doing a quick scan through the boxes and realizing that I could make more money buylisting these random rares than I would selling my [card]Tundra[/card] for full TCG mid value, I informed the gentleman that we had a deal. I offered to let him take one last search through the boxes to make sure I wasn’t making off with anything absurdly valuable, and we both walked away much happier. He got a piece of Magic history that I don’t think he expected to come across that night, and I turned my Tundra into a ton of bulk rares, EDH staples, and other goodies that I will have a much easier time selling for more than what I would make off of the dual land itself.

This trade got me wondering how many other people out there were willing to trade their random Standard cards, EDH staples, and bulk rares into dual lands at buylist prices. After doing a bit of asking around, it turns out that there’s a decent group (at least in my local area) of people who want dual lands, but don’t want to spend real dollars on them. With this in mind, I hopped on eBay with the hopes of snagging Revised mana fixing at a reasonable price. 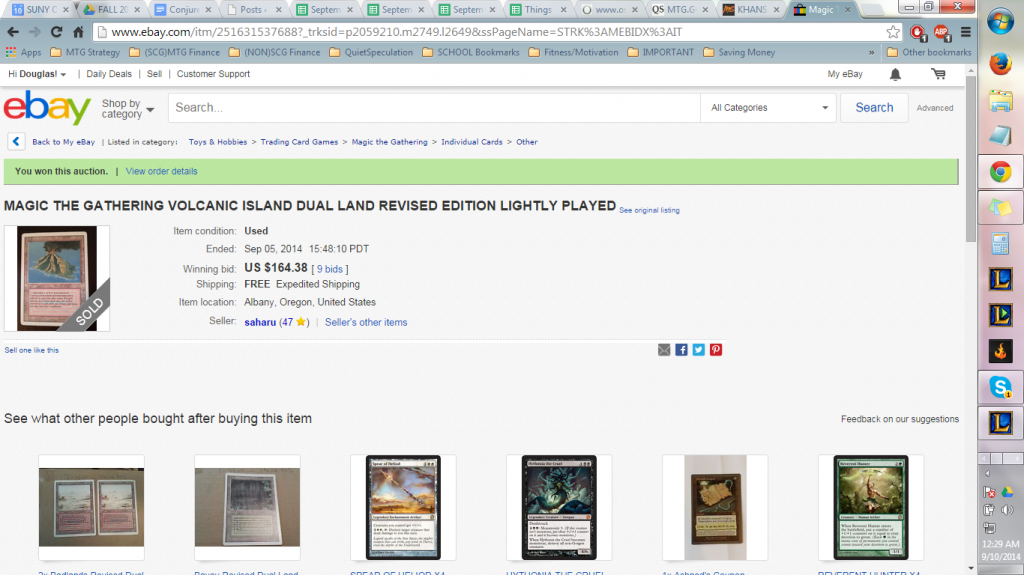 So far, I’ve managed to pick up an [card]Underground Sea[/card] and a [card]Volcanic Island[/card] for approximately $100 below their TCGplayer mid prices. The plan now is to find people who are interested in getting into Legacy and are willing to get rid of Standard, EDH, and pretty much anything else at buylist values to do so. While the demographics might not match up for everyone reading this article, it’s certainly worth a shot asking around to find potential Legacy enthusiasts if you have the cash to drop on dual lands.

If you’ve been following my articles for the past several months, you probably know that I’m not the kind of person who likes to drop cash on long-term speculation that may or may not pan out. I don’t like to preorder multiple playsets of the new toys from Khans and cross my fingers that it’s the next big thing in Standard. I prefer the more slow and steady route of waiting for my deals to come to me, and always buying stuff at buylist. There are a couple of different reasons for me making an exception for dual lands;

1) I don’t expect them to ever plummet in price. I understand that there’s an argument of “Legacy cards are only hanging on in value because of the SCG Open Series,” but I’d like to point out that foil [card]Ingot Chewer[/card]s are sold out at $15 on SCG while normal ones are barely a dollar. Why? Because Vintage is still a format, and people play it even when there’s no weekly organized play structure for it. Even if SCG decides to stop running Legacy events in the next couple of years (which they won’t, because they control a good percentage of the Legacy staples in the market), there will always be players who want to play the format.

2) I believe that I have the ability and connections to get rid of these for a higher value than what I paid, relatively quickly. As long as I keep my highest buy price slightly higher than the buylists of the major retailers (Cardkingdom/ABU), I have a safety net available, and can get out while losing next to nothing if I desperately need the cash (not to say that I’m extending my budget that far into dual lands).

This is Where the Title Came From

I haven’t tried doing this with other Legacy staples (see [card]Force of Will[/card]/[card]Lion’s Eye Diamond[/card]/[card]Jace, the Mind Sculptor[/card]) yet, but I have a feeling that dual lands are going to be the easiest ten cards to make this kind of trade with. Coming from my own past experience as a newer and more casual player, dual lands felt like power. They felt like a piece of Magic’s original design, something that was out of my reach, and I would’ve been perfectly happy with giving up value in trades back in the day to be able to brag to my friends about a beat up [card]Badlands[/card].

Kind of a short and sweet article this week, but next Thursday you get to read about how horribly wrong I was about M15 in my set review… review. Spoiler alert: cards didn’t drop nearly as much as I thought they would. Whoops.

What’s your opinion on trading for dual lands? Are you someone who is willing to give up things at buylist in order to slowly assemble a Legacy deck that you’ll play forever and ever until the sun explodes? Leave a comment in the section below, or on Reddit to start up a new discussion. Thanks again for reading!

@Rose0fthorns     -     Email     -     Articles Douglas Johnson is a 20-year-old MTG player who goes to college courtesy of a scholarship from Gamers Helping Gamers. He is currently found writing a weekly finance column at MTGprice.com, and you can always feel free to contact him on Twitter, Facebook, or Reddit.
Previous Episode:
Learning Legacy – You Probably Shouldn’t Stifle That
Next Episode:
Brainstorm Brewery #114 – Globetrotting