Conjured Currency #51: From the Helvault

Have you missed out on some of the “most formidable winged warriors to ever grace the game”? Do you have an Angel-themed EDH deck? Are you trying to collect one copy of every Angel to ever be printed? If the answer to any of the above questions is “maybe,” “I guess,” or “not really,” you may or may not be delighted to learn that Wizards of the Coast heard your cry to the heavens, and is releasing this. I’ll save you the trouble of Googling it, because several people have already learned that it doesn’t end well. Considering how Wizards of the Coast Damned our hopes and prayers with the last From the Vault interation, I’m fairly confident that they won’t screw up this one nearly as bad.

As Brainstorm Brewery’s Nicholas Cage from Lord of War, I’m going to provide you with my personal thought process on what I’m going to do with this announcement from a financial perspective, look at what’s most likely to be reprinted, and how a potential reprint could affect the price of these cards. From the Vaults also have a particularly interesting foiling process that’s very hit or miss, and that’ll be especially relevant in a casual archetype like Angels where a foil [card]Avacyn, Angel of Hope[/card] (aka Avacyn, the one that’s not garbage) is $90.

The first thing to note is that the release date is August 21. That’s exactly 6 months away, so I don’t think there’s any reason to firesale things yet, even if you believe in the possibility of a certain card being reprinted in the set. These FTV sets have an “extremely limited print run,” as opposed to something like a Duel Deck, where they jam as many copies as possible into the market. Listing your unused copies of [card]Elspeth, Sun’s Champion[/card] on TCGplayer for $30 on November 3 when Elspeth vs. Kiora was announced was the correct call, because the card had nowhere to go from there but down.

In the cases of From the Vaults, powerful Modern or Legacy cards won’t experience such harsh decline. Let’s spoil my assumption on a spoiler, and assume that [card]Restoration Angel[/card] makes it into the FTV. The card has held fast at $8 for the past year or so, and I don’t think that price is going to drop anytime soon. It’s locked out of Modern Masters 2015, and sees enough play in the Modern Jeskai control deck to justify demand going into August.

If we look at [card]Maze of Ith[/card] from the FTV Realms, we can see that the reprint at the end of the summer didn’t cause the Dark version of the card to drop by more than a couple of dollars. I’d argue that the steady drop of Maze in the years to follow had more to do with the card being played less and less in Legacy, since the card was already dropping before then as far back as M13 in July. I think we can take away that Restoration Angel is a fine pickup even going into this set, if you expect to play with them in any fashion in the coming months.

Historically, the recent FTV sets have had a hallmark card that holds a significant portion of the set’s value. Realms tried to get people excited about [card]Maze of Ith[/card] (which is amusing, because [card]Grove of the Burnwillows[/card] ended up being much more exciting in the long term), Twenty obviously had Jace, and Annihilation had… [card]Burning of Xinye[/card], I guess? Or [card]Wrath of God[/card]? It was pretty bad, barring the Cubers who were excited about Burning and [card]Rolling Earthquake[/card], which were previously Portal Three Kingdoms-only cards with a massive price tag simply due to their rarity. I think it’s pretty safe to assume that Wizards will include at least one big, splashy, mythic angel whose pre-reprint price tag will encourage players to buy the set. Here’s a short list of expensive Angels that I think we could see in that slot:

Are they going to jam-pack all three of these into a product that is $34.99 MSRP? No. Definitely not. In fact, we almost certainly won’t even get two of the above in the same product. While FTV Exiled and Relics each have multiple $25 cards nowadays, those were printed when the player base was much smaller, and they probably had a smaller print run as well. I’m predicting that we get one “WOW!” angel that headlines the set as value-packed, followed by a string of $5 or $10 angels spread across multiple colors and rarities that appeal to casual players and have unique effects. Lastly, the set will have its [card]Char[/card], [card]Virtue’s Ruin[/card], and [card]Desert[/card]s, at the bottom of the pile that nobody cares about from a financial perspective.

One of the “garbage” cards that most of us financiers won’t care about will almost certainly be [card]Serra Angel[/card]. Apparently Serra Angel is Richard Garfield’s favorite card in Magic, so I predict an homage to the designer of the game we love, with a foil (possibly alternate art) version of one of Magic’s first creatures. While there will be Angel collectors who get excited over the card, I don’t expect it to survive higher than a dollar with all of the other desirable Angels flying around in the set. 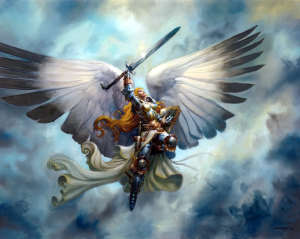 If we go with the assumption that Wizards doesn’t want every single card in the set to be white, or at least mono-white (and I think that’s a fair assumption), it narrows down our search for the other winged warriors by quite a lot. In no particular order, here are a few highlights that I think round out the product.

I don’t think this is an exact list of 15 cards that will all be in the set together. In fact, I’d be surprised if I got more than three or four correct. The product release is half a year away, but it’s something to think about if you’re a fan of angels and are debating on buying into some expensive fliers. For what it’s worth, I think a Gatherer search filtering rare angels for which the community vote is 3.5 or higher is a pretty good indication of a lot of the possibilities for the set.

Although there’s a lot of pure speculation in this article, I think there’s a few simple finance 101 takeaways.

What’s on your list of what’ll be in the set? Angels are just behind dragons in being the most popular creature type in all of Magic, so there are quite a lot of possibilities to choose from. Thanks for reading!

@Rose0fthorns     -     Email     -     Articles Douglas Johnson is a 20-year-old MTG player who goes to college courtesy of a scholarship from Gamers Helping Gamers. He is currently found writing a weekly finance column at MTGprice.com, and you can always feel free to contact him on Twitter, Facebook, or Reddit.
Previous Episode:
Brainstorm Brewery #135 – From The Aether
Next Episode:
Privileged Perspective 15: Challenging Perspectives