The MTGO Zero Gets Online

We’re now two installments deep on this crazy project and this week I went through the process of getting everything set up so we can go to town on some MODO finance. Before I start mentally spending my millions, I decided to make sure I had everything in place for when I made my first card purchases. I am starting from literal scratch, never having even downloaded MODO in my life. I’m sure I’m like a lot of you in that regard. Given my relative lack of experience I decided not to get any help because I thought it would be funny if I fumbled around like a total noob, but fortunately for me and unfortunately for those of you who were looking forward to me making a hilarious, embarrassing mistake that you probably also made, but get to pretend you didn’t, it’s actually not that hard to get started.

I figured the most intuitive place to go would be the mothership. It was simpler than I could have dreamed; I navigated over to the “Digital Games” tab and clear as day, right in the middle of the page I found an icon to help me create an account. I figured that was probably the best first step, but as it turns out, it wasn’t necessary yet. If you type something like “Download Magic Online” into Google, you can download the software without making an account. When you install and open the software, you’ll get the following screen: 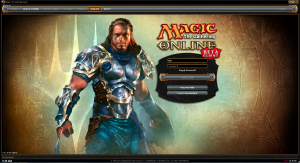 The prompts at the bottom will either let you play a free trial or create an account. I feel silly telling all of you this because there’s a good chance you know it already, but shut up, I didn’t.

Now I went through the process of creating an account. I ended up with the username JAlt, but only because there was an issue with trying to pay with Paypal. Every time I selected it as my payment method and tried to pay, it kicked me off of the screen, but said the username I had picked was already taken. So I went through JasonEAlt, JasonEAltMTG and xXBigSexyDaddyXx before I finally got it to accept a username and payment method combination that didn’t give it a conniption fit. We were off to a pretty rocky start. I’d like to tell you the MODO Beta Client is easy to use, free from bugs, and runs smoothly and expeditiously, and also that the sisters left Andy Dufresne alone, but life is not a fairy tale. I’m using the MODO Beta Client instead of V3 because if you’re downloading this as late as I am, you have to use it, and I’m no MTGO Zero if I’m not on MTGO.

I restarted my computer after the installation process and logged in. I told you all my username because you’ll never guess in a million year that my password is “Kittensarecute.” Log in and you’ll get to a different screen. Eventually. Hopefully.

Your entire collection is stored on the server, which is probably wise because if it were stored on your computer it would be vulnerable to tomfoolery and possibly even hijinks. Upon logging in, the weird, Bruce Willis-with-hair-looking Gideon is replaced with a weird, Bill Nighy-looking Gideon and you’ll see a bar at the top of the screen with a bunch of options:

I had next to nothing on my home screen. It featured a tournament that was half over, displayed my buddies (I don’t have any yet but add me if you want), and had a few brief announcements. I figured “Collection” was where it’s at, so I clicked over.

I had nothing in my collection except a “New Player Stimulus Package” or whatever they call it. Clicking on it gave me the option to open it up. Inside I found five generic tickets (they’re called tix or ticks. I’m not sure which. I don’t see it spelled that often) and 20 “New Player Points” which get you into special noob drafts or sealed events so you can learn the interface without getting your pants pulled down by some pro who is double queuing and makes you wait until his round clock is nearly out before he comes over to spank you. You’ll also get some avatars which I guess you can use as your face. They may or may not be random – I didn’t see one I liked. It’s not certain I’ll be playing matches so avatar be damned, let’s see what else we got. “What else we got” amounts to a pile of poop – random M14 commons and uncommons. People tell me you can’t sell them because they’re tied to your account, but there was no value there anyway.

So I had five generic tix to my name. Not the most auspicious way to start a card empire, but a journey of a thousand miles begins with a single step. If I’m going to Journey all the way to Nyx…no, there’s no way to make that funny. Moving on. If I’m going to actually make any money at this I am going to need a lot more buying power than five tix. Even if I had money, I’m not sure I would know what to do with it.

The next tab is “Play Lobby” and I noped right out of there in a hurry. It’s full of people, playing Magic, and that’s not really something I want any part of.

The next tab after that is “Store” and we need to go to this tab. For those of you playing along at home, you’ll need to decide your budget right now. Or, later, I guess, but I decided my budget already so I knew what to do right away. There are a bunch of categories of products in a menu on the left. The very top one is “event ticket” and while I don’t know if I’ll be playing events, I’m pretty sure this is the in-game currency everyone refers to as “tix.” I wanted to be sure so I looked around for other kinds of tickets and couldn’t find any. Priced at $1 a ticket these will be our bankroll. I put 100 of the bad boys in my shopping cart and bought them.

Armed with 105 tickets I was ready to conquer the world. But before I could turn in for the night, I knew I had a bit more investigation to do. I ignored the “Accounts,” “Help,” and “Chat” tabs and stared with intent at “Trade” which I could only assume was what I was looking for.

Ladies and gentlemen, “Trade” is going to be our home for the duration of this experiment. I am going to buy cards with my “tix” and see how long I can go buying and selling until I run out or make enough money that I can sell my tix and buy a private island that I can stock with poor people whom I will hunt for sport.

I figured before I called it a night (it had been a long one at this point – MODO runs at its own pace), I should try and figure out how to buy a card. It was not as easy as I had thought. The procedure, I figured out, went like this:

Right away, I messed up by not knowing my tix weren’t tradeable. Go to collection, right click on the tix and select “add all to active trade binder.” This makes them tradeable.

If you want to buy a card, say, Rubblebelt Raiders because you think it will go up, type the card’s name into the search bar. It will bring up bots and people who are advertising that card. I recommend finding a bot with a large inventory. Click “trade” over on the left and it will take you to a screen with the bot’s inventory and a chat window. You need to pay attention to both. If your computer wigs out and keeps the chat window behind the inventory screen you’re going to be confused as hell. When you click a card, the bot will display the price in the chat window, or the human will tell you what they want for it. Double clicking the card will add it to the trade inventory on the left. I found a bot that was selling four copies of [card]Rubblebelt Raiders[/card] for 0.05 tix each. A nickel for a rare? That’s not bad! I jammed all four copies into my trade area and waited for something to happen.

Nothing happened. I read every line of text on the chat window and it turns out the bot had given me instructions for how to prompt it. Every bot seems different, but the one I traded with told me to type “done” when I had enough cards. Since the four [card]Rubblebelt Raiders[/card] only cost 0.05 tix and it had to take a whole ticket, it banked 0.80 tix as “credit” for future purchases. This meant I had to remember this bot. I added it to my buddy list by going to “add buddy” on the home page and pasting its name in. Now whenever I want to buy more cards, I can click on its icon on the home page and start a trade with my banked credit.

I figured out how to make an account, download the client, trade tix, buy cards, bank credit, and add a buddy. This was a productive day. I have 104 tix, four [card]Rubblebelt Raiders[/card], 0.80 tix in banked credit and a lot of work ahead of me. I want to start being a little more aggressive with my buys in the meantime because I want to be ahead of MODO redemption. The next installment should be a barn burner. I think. I actually don’t get that idiom at all. If I owned a barn, I can’t imagine I’d want it burned. Wait a minute, what if it’s a terrible barn and I have it insured? Okay, makes sense now. Next installment will be more value than burning down your barn for the insurance money. See you then!

@JasonEAlt     -     Email     -     Articles Jason is a financier living in Michigan. You can find his work on Gathering Magic, Quiet Speculation, and MTG Price. Jason brings several years of MTG finance experience to the podcast as well as his signature wit and comic relief. Jason joined the podcast as a guest on Episode 10 and again on Episode 12 and it was clear that the group had a great dynamic. He became a permanent member of the cast soon after and the world of MTG finance hasn’t been the same since. Jason is also a disgruntled former member of Team Simic.
Previous Episode:
(Almost) Getting There With Scion of Vitu-Ghazi – Open Top 4
Next Episode:
Brainstorm Brewery #75 – Sesquicentennial

5 comments on Jason Alt – The MTGO Zero Gets Online