Jolrael and her Killer Lands 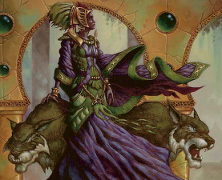 Land Destruction (it’s not what you think)

People generally hate land destruction in EDH and I think that’s okay. Land destruction is not terribly fun for the affected and tends to make games last forever. So we’re a no go on land destruction – but what about land DESTRUCTION? As in, destroying people with your lands? That sounds about a million times better and way more fun. With Zendikar back in the MTG spotlight, so too is the spotlight back on lands and their effect on the battlefield. So let’s take a look at 5 commanders who give land destruction a whole new meaning.

Kamahl is one syllable away from having the same name as legendary wrestler Kamala so already this guy has a leg up on most opponents he’ll face. Kamahl is all well and good in an animate land strategy but let’s be honest, he turns the once mighty lands around him into little wiener creatures who get eaten by Sanctuary Cats. I guess it’s a pretty good thing he comes with an Overrun tacked right onto his muscular-dude body. Overrun on a pair of jacked up hams? Count me IN. 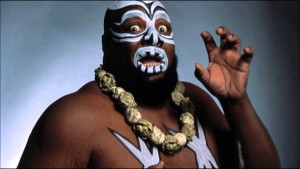 Kamala, claw of Uganda. Remember when he didn’t know how to pin guys? Oh Kamala, will you ever win?

Titania is a very trendy commander these days it seems, she’s basically the Chipotle of EDH, or maybe Narset is Chipotle and Titania is the term “Netflix and chill” of EDH. Either way, she’s a top trend these days and it’s probably mostly due to the fact that she is a build-around commander that employs a different strategy. Titania’s gameplan is one we haven’t seen much of in Commander and no other general quite recreates the feel of her abilities. Titania (by the way, don’t try and make up a shortened version of her name, it won’t end well) kills people by sacrificing and killing her own lands and if that isn’t doubling up on land destruction, I don’t know what is.

What are we calling this guy? The angry cloud? Fire arms? Blob man? For the record, I’m up for any of those but I will need full credit if one goes viral and somehow starts making money. This isn’t related but it really looks like Omnath, Locus of Rage is wearing flared pants in his BFZ card. Blob-bottoms? Omnath is only one of 2 commanders that have the landfall ability and his is by far the best. When you drop lands, this guy drops 5/5 elementals. I feel like we can make this work in EDH and in fact I did in a recent episode of The Commander’s Brew that you can check out on iTunes or your local podcast app. 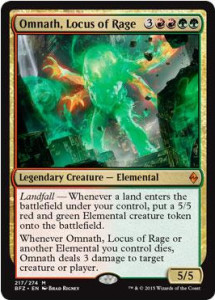 Check out those slacks!

What is it that Gruul commanders are so upset about? Is it the not being able to remove creatures efficiently in EDH? Is it the not being able to use conjunctions and make full sentences? These guys live in the forest and just hunt, eat and have sex all day. It’s primal but Jesus, it’s basically paradise. Seriously, relax. Borborygmos especially has nothing to complain about, he turns lands into Lightning Bolts and is even getting some play in Modern and he costs 7. GET OVER YOURSELF PAL.

(Fun fact: Borborygmus is an actual word for the noise your stomach makes before you fart or something)

Jolrael is a commander I didn’t even know existed until recently, mostly because strategies where you animate lands into creatures scare me. I live in fear of turning all my precious mana producing lands into little dudes, having someone drop an instant speed Rout and then I quickly cry like I’m watching the end of Pixar’s Inside Out. While Jolrael does nothing to quell those fears, she does offer up the option to respond to someone’s Wrath of God with an activation that can kill one of your opponent’s lands. Hope you guys like kid’s movies because Sadness might be at the controls when they see Jolrael in your command zone.

Since we can clearly see Jolrael is the queen ofour brand of land destruction, (let’s just ignore Titania, admittedly) AND killing other people’s lands, let’s dive a little deeper into Jolrael and exactly what it is that makes her and her deckmates such a force to be reckoned with.

[deck title=Jolrael and the Killer Forests]

*1 Liege of the Tangle

*1 Patron of the Orochi

*1 Howl of the Night Pack

*1 Triumph of the Hordes

*1 Waiting in the Weeds

It’s often joked that the scariest turn one play is to play a basic Island. In this deck we’ll be taking that joke and turning it into a hilarious twisted nightmare akin to M. Night Shyamalan’s The Happening for our opponents by having them totally fear the forest. Since Jolrael turns our lands into attacking creatures, we definitely want as many Forests as possible and the more we have the more destruction they’ll cause and the more invisible gas they’ll make.

Cards that usually make people fear the basic forest are things like [card]Kalonian Twingrove[/card] or [card]Oran-Rief Hydra[/card] (both of which we have in this deck) but the real way to make your opponents tremble in fear isn’t to just plant a bunch of trees – it’s to plant a bunch of trees and then make your trees turn into monsters and decimate your competition. I’m talking about Shyamalan-levels of plant murdering creatures here. We’re going to make our opponents say “What? Noo!” like only Mark Wahlberg in a very unconvincing role in a horrendous motion picture can. 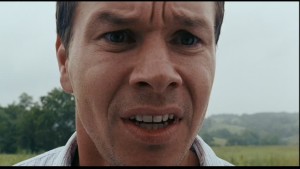 This guy is super confused. “Lands… are creatures?”

On the top of the “making forests monsters” card list is what I can only assume would be Ravishing Rick Rude’s all-time favourite Magic card, [card]Rude Awakening[/card]. I remember getting this card in a pack of Modern Masters and since I was just cracking them for “value” (I was new, okay?) I swear I could hear the Price is Right noise of people losing at Plinko ringing in my ears as I saw this in y rare slot. Animate lands? Entwine? I wanted a Kiki-Jiki! Well, lucky for us, years later Jolrael inspires me to build a deck and lo and behold, Rude Awakening pops its head out of my binder and becomes maybe the best card in my latest EDH deck.

The whole point of this deck is jam as many forests as possible on the battlefield, turn them into creatures and then swing in for a kill. Rude Awakening not only achieves this, but can also become a massive ramp spell while at the same time surprise blocking an invading army. Honestly, the value is like… wow… I just need a second okay?

Sorry about that, okay back on track here, Rude Awakening isn’t the only card in the deck that springs our lands into battle, in addition to Jolrael we’ve enlisted the help of the instant speed [card]Natural Affinity[/card], [card]Thelonite Druid[/card] which turns our lands into 2/3s but requires a sacrifice first and [card]Hunting Wilds[/card] which is a little mini Rude Awakening plus a bit of ramp. We also have [card]Life and Limb[/card], but I’ll be honest I think this one is a little risky, as once it’s out there, your lands are permanently creatures and thus very open to a mass removal… happening.

So if you haven’t figured it out by now, Jolrael and her forests are going to use a classic swarm strategy of making a million guys and then pumping them all up and swinging in huge. So let’s support it not only with token producers, but with token producers based on how many lands we have. [card]Beacon of Creation[/card], [card]Howl of the Night Pack[/card] and the totally, insanely good [card]Avenger of Zendikar[/card] all make as many tokens as we have lands and in this deck, we will have a LOT of lands. My personal favourite of these being [card]Waiting in the Weeds[/card] mostly because of the amazing art featuring the weirdest cats in the world. (Which apparently were supposed to be squirrels?) 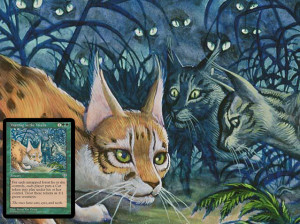 “Well Jerry, your cat is fine but it got into a fight in the forest and now it’s ears are 3 feet long.”

Playing any mono-coloured strategy in EDH can be risky, so whenever you do it, it’s a good idea to really play to the strengths of that colour. In our case, Jolrael does exactly that by utilizing ramp as a way of building up an army. Any EDH player worth their salt knows a good amount of green ramp spells so I’ll just say that [card]Boundless Realms[/card] is so good it’s sort of like that scene in The Happening when the guy said he was bringing hotdogs on the trip for no reason. Some other ramp spells that may not come to mind right away include [card]Skyshroud Claim[/card], [card]Ranger’s Path[/card], [card]Silverglade Elemental[/card] and [card]Gaea’s Touch[/card]. All excellent ramp spells that you may not normally play in a multi-coloured deck, but really shine in mono-green.

So that’s how you destroy your friends with the very air-bringing trees around them. Throw a few landfall cards in there like [card]Zendikar’s Roil[/card], [card]Rampaging Baloths[/card] and [card]Sporemound[/card] for some reach, a few aforementioned [card]Overrun[/card] effects and watch as your army of tree-beast-monster things take down your enemies’ Commanders, power lines, ill-parked cars and bands of travelers outrunning a mysterious and ridiculous gas the trees are emitting because somehow they’re mad at people for global warming. 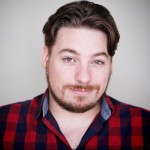 Andy Hull is a Comedian, Writer and EDH addict from Toronto. He's written and is featured on the Geek & Sundry webseries Space Janitors and co-hosts The Commander's Brew podcast.
Previous Episode:
Money Draught #48 — Cloaca Maxima
Next Episode:
A Veritable Mixed Bag: Looking Back at GP Seattle