Magic specs are like steaks – the rarer the better. The fewer copies of a card on the market, the bigger payoff if a spec hits. Simple enough.

Sometimes, though, the color of the expansion symbol doesn’t tell you everything you need to know about supply. Sometimes you have to consider other factors. A few months ago, in Rare is the New Uncommon, I talked about how the year a card was printed is very relevant when estimating supply. Today I’m going to talk about how the supply of two rares printed in the same year can also vary greatly. It is commonly known as the “small set” or “third set” effect.

The conventional wisdom is that a small set (or third set) will be opened less than the first set in a block because it will be drafted less and just generally available for a shorter period of time. This means fewer cards in circulation, which means higher prices for the cards that do hit from those sets. [card]Jace, the Mind Sculptor[/card], we’re looking at you.

Traditional is the New Novelty

Wizards hasn’t done many traditional block structures in recent years, which only complicates things. The last actual big-small-small structure (before Theros this year) was Scars of Mirrodin, and we’ve only seen the “traditional” block structure two of the last five years.

This analysis is going to focus mostly on drafting, though later on I’ll talk briefly about other considerations. To get started, we need to make a few assumptions. A quick note on assumptions: any time you are lacking full information, you will need to make them. They are never perfect, but that’s fine as long as they are directionally correct. We are trying to understand the magnitude of the small set effect, not peg an exact number of cards in circulation. If you are not comfortable making assumptions, you are resigned to know exactly nothing instead of knowing something valuable within a margin of error.

We’re going to assume that people draft uniformly throughout the year and that they always draft the newest format. I think these are fair. By doing this, we can boil drafting down to two key factors. The first is the amount of time a format is current, and the second is the ratio of packs in a given format.

An example will make this easier to understand.

Clearly, Theros is going to be opened a whole lot more than Born of the Gods or Journey Into Nyx. Now let’s do the math.

Since all we care about is the ratio of sets here (like I said, we’re not trying to estimate the actual number of cards or packs opened), the units don’t matter. I’m going to multiply the number of packs in the format by the number of weeks it is current to get pack*weeks, which is a nonsensical unit that is just going to drop out later. It gets us where we need to go. Using the numbers above:

So if you are wondering how much Journey Into Nyx will be drafted in comparison to Theros, just take the ratio of their pack*weeks.:

The numbers are pretty dramatic, in my opinion. They are especially interesting for the MTGO market. I am of the understanding that the vast majority of digital cards find their way into the economy through drafts, although we can’t know this for sure. If that is true, rares and mythics from Theros will be in huge supply compared to the rest of the block. Think of how that affects a cycle like the Temples. There could be four R/G Temples for each B/R and there could be almost ten for each U/R (when it is release in JOU)! Ten to one!

Keep in mind that this doesn’t tell us how many packs are being opened in an absolute sense, just in comparison to Theros. We’re fine with that, it still gives us the information we need as financiers.

Okay, but Can We Go Deeper?

Now let’s have some fun and expand the analysis to older sets. Since we’re working in ratios here, we need to do everything in relative terms and pick a baseline set. Theros is perfect. We set Theros equal to one, so every other set on this chart is in terms of Theros packs.

Here is our chart: 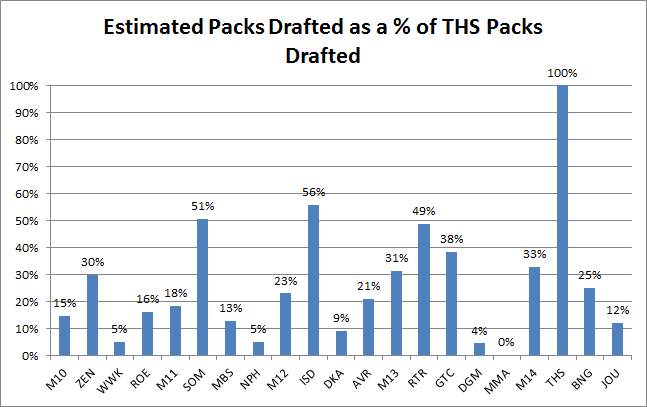 Let’s make sure we know what we are looking at. According to this model, three packs of Theros will be drafted for every one pack of M14 (33%). Even though that format was triple M14, it was drafted for a much shorter time.

About two packs of Theros will be drafted for every one Innistrad pack (56%). The difference is caused by two years of player growth along with the fact that Innistrad was benched when Avacyn Restored came out.

Return to Ravnica was drafted less than Innistrad according to this analysis. Even with 25% growth in the player base, sitting out for Gatecrash held RTR’s numbers down.

Simple enough? Modern Masters was intentionally left out because of the limited supply.

Some things that jump out to me:

Even though all sets are in terms of Theros, you can compare non-Theros sets. It’s correct to say that, by this estimate, Avacyn Restored (21%) was drafted a bit more than half as much as Gatecrash (38%).

As always, use this as a starting point and tweak as you see fit. Innistrad was an incredibly popular draft format, so you might want to adjust that number up somewhat. It’s probably not going to change your conclusions, though.

I’ve already said I think you can use this model as-is for MTGO. In paper, you have to account for all the packs that get cracked by stores and casual players outside of drafts. I have no information on this, so it’s going to be a guessing game. I will explain how I think of it, although it is certainly up for debate.

I would start by adding a “base load” of paper cards. My thinking is that stores and casual players are going to buy up a certain amount of each new set, and that won’t really depend on the draft format or the size of the set. If I own a store, I probably need to bust X boxes of each new set to get the singles to support my Constructed players. I’d still need to get those [card]Voice of Resurgence[/card]s in my case whether or not anyone was going to draft the set.

We have to do everything in terms of Theros, so let’s just guess that two-thirds of Theros cards are being opened in drafts, leaving one-third to be cracked by stores. We’ll carry this fixed amount over for all sets. Your guess is as good as mine on the number. Here’s how it would look: 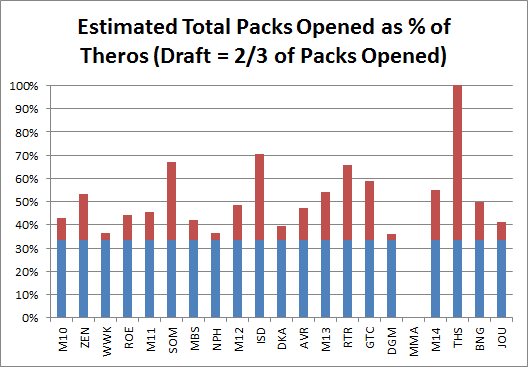 The red bar is the draft portion, the blue is non-draft product being opened.

Again, it’s all guesswork, but it should show you that the drafting differential is still relevant in a scenario like this, even if the effects are minimized somewhat. Now Innistrad reads at 70% instead of 56%. As you continue to increase the fixed portion (blue bars) and minimize the Draft portion, that gap will close even more. If Draft was responsible for only a very small portion of cards coming into the market (and I don’t think it is), then it wouldn’t matter much what was getting drafted and for how long.

In reality, the blue bars will vary as well. I’m sure stores sold way more Innistrad to casuals than Dragon’s Maze. This is just a starting point, but it’s more information than we had before. Almost any way you cut it, small sets are opened far less than first sets. And Theros…well, we are swimming in it, what else can you say?

That’s quite a bit for this week. Thanks for reading.

@acmtg   -    Articles Anthony is your typical started-during-Revised-then-quit-then-came-back-years-later Magic player. He enjoys the financial aspect of the game the most, mainly because it lets him use his analytical side but also because it makes up for the money he hemorrhages drafting on MTGO.
Previous Episode:
Standard Commander: Return to Ravnica Analysis
Next Episode:
All Magic Has a Price #4 – The Big Winner at the Prerelease