When you were younger, did you and your friends ever race up the stairwell at school? “Race you to the top, Jimmy!”  Well, I was the freakishly tall kid that could climb two stairs per step and could beat even the fastest one-step-at-a-time friends. That freakishly tall kid is devotion.  This new Theros mechanic has created not only a new way to play but a new way to build decks.  Now you can accelerate your mana while also playing creatures that matter.  All your opponent can do is throw marbles (i.e. removal spells) up the stairs and hope you fall on your face, or at least force you to take one step at a time like everyone else.  My point is that devotion is here to stay.  Sometimes you ramp up a nut draw (three stairs at a time) and sometimes your opponent can keep your devotion under three to force fair play (one stair at a time). 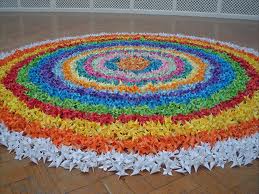 Devotion has also transformed the CMC (converted mana cost) category in card evaluation.  We all wanted to play [card]Phyrexian Obliterator[/card], but many times the mana cost just couldn’t justify hedging the mana base that far for a single card. Now the mana cost is less of a restriction and more of a perk, giving life to four, five, and six drops that come down one or two turns early without the hassle of mana rocks (Cluestones, [card]Chromatic Lantern[/card]) or mana dorks ([card]Elvish Mystic[/card], [card]Sylvan Caryatid[/card]).

We have all seen the price spike of cards like [card]Boros Reckoner[/card], [card]Nightveil Specter[/card], [card]Pack Rat[/card], [card]Lifebane Zombie[/card], and [card]Tidebinder Mage[/card], partially due to their utility of keeping devotion high. I’ve picked five cards from most of the color wheel that could see a similar jump with the release of Born of the Gods and forward. 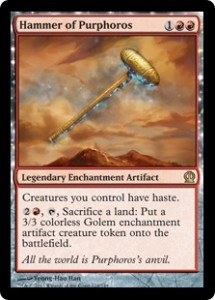 It still blows my mind that this card is sitting at a dollar.  Everyone seems to currently be hyped up on the Mono-Black Devotion train. This just makes me picture [card]Purphoros, God of the Forge[/card] sitting in the corner hitting nails into a wooden 2 x 4. Turn 2 [card]Ash Zealot[/card], T3 [card]Burning-Tree Emissary[/card] + [card]Hammer of Purphoros[/card] + [card]Nykthos, Shrine to Nyx[/card] = Early smoke/food/restroom break.  Giving haste to all your top decks and making extra lands into 3/3’s lets red decks do what they usually can’t: win through a flood.  I call my mono-red devotion deck “Moses said so,” because not even a sea can stand in the way of these devoted red creatures. I know it’s a rare from one of the largest selling sets in Magic: The Gathering history, but trust me when I say, cards get hard to come by when the next set comes out. 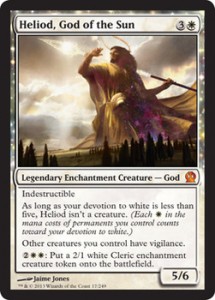 This card need a solid two-drop (CMC WW, of course) for consistent success in competitive play. Ramping out tokens with the extra mana may not increase devotion, but playing just enough creatures to keep devotion at five or six can apply pressure while also preparing for a post-board sweeper hand vomit.   The card has a $5 price tag, the cheapest of the first five gods. Picking up three for yourself and three to trade off later could set you up for some quick profits.  As a mythic and a poster child of the Theros set, all it takes is a two or three copies in a top-eight list to set up a profitable dump. 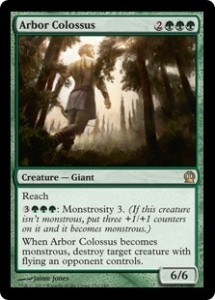 GGG and 2 colorless has never been so easy to cast as in this two-color-or-less format.  A 6/6 creature with reach that can swat down anything in the skies of Standard AND shoots down a flier next turn! What’s not to love? This, my friends, is not a dollar rare.  Nothing about this card should place it in the box of bulk rares you put in a shoe box under your bed.  If curving out into odd CMCs (3, 5, 7) is a goal for green decks in future Standard, this guy will be first in line.  Pick up as many of this monster as you can, as long as you don’t make [card]Polukranos, World Eater[/card] (aka Pocahontas, World Eater) jealous.  That guy knows how to fight…. 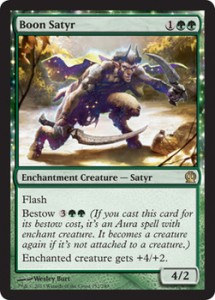 I like to think of this guy as a five-turn clock with an upside.  This card is a beast and when I started picking copies up it was sitting at a dollar.  It is now up to $3 but still has potential to rise.  Knowing this is an enchantment-based block, any efficient bestow creatures or powerful enchantment amplifiers can crank his potential up another notch.  [card]Ethereal Armor[/card] is already a built-in combo!  He trades with almost every creature on the ground and makes every control player cry when he survives a [card]Supreme Verdict[/card] (when bestowed of course).  I can see, at minimum, a price double to $6 in the near future. 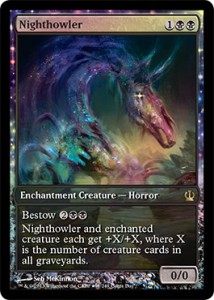 With the G/B scry land coming to a pack near you, I see [card]Nighthowler[/card] being a part of a tier-one self-mill strategy.  I know cards like this have been printed in the past, but the bestow ability could give this card the playability it needs to break into Standard.  [card]Commune with the Gods[/card] and [card]Grisly Salvage[/card] both help you grow his power and toughness, and one at instant speed.  Even scrying off the new G/B scry dual land or a [card]Reaper of the Wilds[/card] trigger could increase the consistency of your “build your own fattie.” Honestly, you could probably trade the lint in your belly button for this guy right now.  All it takes is a playable two- or three-drop trampler to give [card]Nighthowler[/card] a chance to show howl hard he can punch.

Sadly, many of the black and blue devotion playables have saturated Top 8’s enough recently to create a higher demand and price.  Keep an eye on these staples when these strategies fall out of favor and drop to a reasonable level.  With so many more cards yet to spoil in future expansions, there’s a good chance those strategies will eventually be reincarnated to fight the future metas.

@TNSGingerAle     -     Email     -     Articles Houston is the host and creator of Tap N Sac Podcast. He enjoys any format with a healthy community. He usually taps Mountains to have fun and taps Islands to win.
Previous Episode:
MtG After Hours #5 – Technologically Inept
Next Episode:
Michael Cuevas – Weekend Recap 12/13-12/15