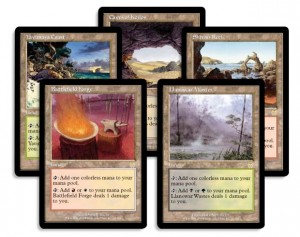 Let’s get the obvious picks out of the way. I know they’re reprints and I know they’re not the fetches you’ve been dreaming of, but they’re dual lands. You know what happens to dual lands that stay in Standard after rotation? They go up! What does almost every competitive deck need to play a grip filled with spells?  Duals! It’s simple.  Pick up your playsets for any amount under $5 and you can thank me later. 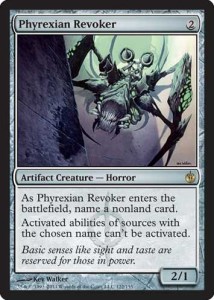 What do aggro decks have a hard time dealing with? If you said sweepers—well, you’re correct, but that’s not what I was looking for. Planeswalkers are tough for aggro decks, as they often stall your chances to swing at your opponent’s life total. [card]Jace, Architect of Thought[/card], is an example of a ‘walker you need to take care of as soon as possible (unless their life total says otherwise).  [card]Domri Rade[/card]or [card]Kiora, the Crashing Wave[/card] are examples of walkers that may not directly impact your sea of creatures but will quickly cause you problems were they to live through the next few turns. [card]Phyrexian Revoker[/card] solves this problem while offering a respectable body to boot. It also locks down the cycle of godly weapons from Theros, which could come in handy.  Revoker lets you put those [card]Pithing Needle[/card]s back in the bulk rare box and start attacking for two. It’s colorless, so it can jump into any and all aggro decks that need this form of disruption. I say it will bounce between $3 to $6 during its time in Standard.

It’s still hard to gauge the power of some of these “Soul Titans.” The potential for instant-speed effects from the graveyard in a format not equipped with an arsenal of graveyard hate seems high, but the only one of these three that fit into a self-mill deck is [card]Soul of Innistrad[/card]. [card]Soul of Shandalar[/card] and [card]Soul of Theros[/card] are more powerful but don’t seem to line up with strategies their colors want to execute right now.  That said, underestimating the power of [card]Nykthos, Shrine to Nyx[/card], seems primitive. [card]Whip of Erebos[/card] is another potential soul mate for this cycle’s playability post-rotation.  If you can pick these mythics up at $5 or less, I would. I only see graveyard or reanimation potential in Standard. At worst, you can trade them to your EDH friends that can’t stop drooling over a cycle of straightforward potential. “I know Soul of Theros looks EXACTLY like a [card]Sun Titan[/card], Jimmy, but I promise—they’re quite different.” 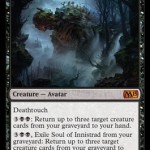 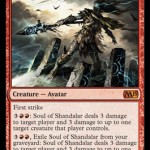 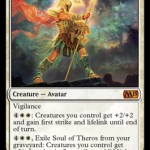 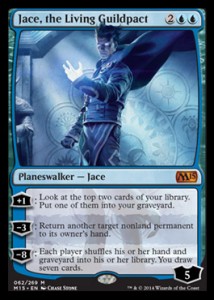 A planewalker on The Financial Five right before the set release! I promise I’m sober and this speculation is intentional. He looks mediocre now, but I already like some of the synergies he has with Theros. His +1 with scry is a great way to increase the power of each draw.  If the graveyard plays a part in future Standard, Jace will unlock an easy and repeatable way to place creatures in it. I think the mana in Standard will be good enough for a BUG list featuring [card]Courser of Kruphix[/card], [card]Jace, the Living Guildpact[/card], and [card]Whip of Erebos[/card]. He also plays well with the dictate cycle: at end of turn, cast [card]Dictate of Kruphix[/card], draw two on your turn, and use Jace to bounce your Dictate back to your hand if you see fit. 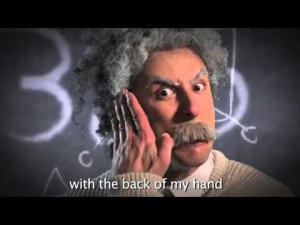 And right now, I’m just pointing out potential. I predict many competitive players looking to unload this guy quick because he doesn’t do anything in the format right now.  Keep in mind that if he’s going to show up on a deck list, a “4x” will be sitting next to his name.  This is definitely the largest risk of the five picks I’ve selected today, but it still has the largest growth potential of all the previous four picks combined.  I know Jace has a $10 price tag clipped to his ear, but I think players will be dumping him at their first opportunity.

I am excited to see how M15 impacts Standard. Quite a few powerful cards are looking for a home to shuffle in.  A good format shake up is great to keep players trading for their decks of the week.  I hope you’re ready.

@TNSGingerAle     -     Email     -     Articles Houston is the host and creator of Tap N Sac Podcast. He enjoys any format with a healthy community. He usually taps Mountains to have fun and taps Islands to win.
Previous Episode:
Pitt Imps Podcast #77 Hardy a Thang
Next Episode:
The Spike Feed Episode 46 – Church Kiss

30 comments on The Financial Five: M15