Sequels are Always Better than the Original

Welcome back, speculators and players alike. Normally I’d use this segment to look back at last week’s article and amplify a specific point that I failed to mention, or answer a question from a reader. Instead, this whole week’s article aims to be a part two of last week’s starting piece on how to deal with bulk common and uncommon parts of collections. We’ve already gone over the basics of “picking” through bulk for the dimes and dollars that others have left behind, and done a quick overview of your quickest methods available to exchange those cards for cash.

This week, I’ll answer a couple of questions from readers regarding how we can find collections containing bulk commons and uncommons, and alternative methods to sell than the “1k boxes sold on Craigslist or Facebook” option.

One of the best reasons to deal with bulk commons and uncommons is that the cards are ones that 99.99998% of the Magic population doesn’t give a damn about (source of statistic withheld for safety of experimenter). Your average PTQ grinder and FNM goer don’t care what happens to their [card]Skull Rend[/card]s or their [card]Charging Badger[/card] after the draft or sealed event is over. After Johnny opens a booster box and has his pile of rares and mythics sleeved and in his binder, the chaff is often taken home and thrown in a closet to forget about or donate to a new player years down the road. Being offered cash for these cards becomes highly appealing when they’re doing nothing but collecting dust. As usual, don’t go offering to buy stuff while at your LGS without the owner’s permission. In my experience, store owners usually don’t care if you want to buy bulk commons and uncommons, but always ask first; better safe than sorry.

Due to the fact that those cards will never see the light of day, you need to make other people aware that you’re in the market for that particular product. Hang around after a booster box opening or draft, and offer $2.00 for the leftovers. A booster box has 36 packs, multiplied by 14 commons and uncommons per pack, equals roughly 500 cards, depending on the foils and [card]Banishing Light[/card]s that they remove. Your friend doesn’t have to carry the box home and throw it under his/her bed, and they get an extra soda and candy bar out of it.

As long as you don’t pay more than $4.00 for bulk that you know is probably devoid of [card]Banishing Light[/card]s, you’ll do fine. I personally pay $5.00 per thousand on collections that could have some spicier numbers; usually anything printed before Innistrad. That’s where you’ll find the [card]Exsanguinate[/card]s, [card]Go for the Throat[/card]s, and [card]Palladium Myr[/card]. Find a buy price, and stick to it.

Not every LGS owner has multiple employees to help them sort through the stuff that they buy. If you’ve been following my column for a while, you know I’m a huge fan of setting up deals with the proprietor of the establishment where you play cards, and this is no exception. I’ve found [card]Might of Old Krosa[/card]s in a bulk box before, and if you make your presence known to the owner of the store, you can set up an agreement where you get to take home the thousands of cards that the owner doesn’t want to deal with at a bulk rate, and pull some nice gems out. Overall, it’s extremely important to make yourself known, and ensure that other people are aware you want their bulk. There are many ways to bring up the subject: “Looks like we’re $5 off in my favor in this trade. Do you have any bulk commons and uncommons at home you can bring next Friday? I’m always interested in picking up extra cards, and we can call it even at 1,000 bulk cards.”

This probably has the lowest success rate out of anything in Magic finance, but it’s still fun to take a weekend and go yard sale-ing, hoping that the next house has the dust-covered binder full of dual lands with a $20 sticker on it. It’s certainly the season for garage sales, so take a friend who might be interested in something else at the sales, and enjoy the summer weather. Considering Magic players and console video gamers are often in the same parts of the Venn diagram, you can usually score some great deals on retro video games as well!

You’ll remember from last week (or maybe you won’t, if you didn’t read the article or have extremely short-term memory loss) that a trick for estimating the number of cards in a stack is to use the side of an unsleeved card as a measuring stick that is 200 cards wide. I highly recommend that you spread this tip like wildfire, because it makes it much more likely for your friends and customers to guesstimate stacks of 200 than laboriously count to 20,000. If you own a portable kitchen scale, you can also weigh 1,000 cards. I have a cheap scale that I bought at Wal-Mart for $10, and it says that a 1k box with approximately 1,000 cards in it weighs 3 pounds and 8 ounces. This makes the whole process quicker for everyone. As an aside, the kitchen scale also helps when weighing packages to ship via PayPal, so it’s not a bad item to have on hand.

That’s a pretty horrible play on words, but Craigslist is often viewed as a risk for buyers. What if you buy 5,000 cards, then get home and you find 4,999 white-bordered [card]Circle of Protection: Black[/card] and one [card]Goldmeadow Dodger[/card]? Well, that kinda sucks. But it’s ok, as long as you follow a single golden rule. If you take one thing from these two articles, or any Magic finance article really, be it this: Don’t overpay. If you paid $16 for those 5,000 cards, go find someone who pays $5.00 per thousand, use the extra $4 to buy a gallon of gas to cover a part of the trip, and enjoy the fact that you got to get outside and enjoy the fresh air from sitting in your room and looking at Magic cards for 14 hours straight. We’ve all bought mediocre to bad collections, but as long as you pay less than what you can immediately flip it for, you’ll do fine. If you plan on doing some weekend Craigslist hunting, you’ll want to know a few signs to look for in a good advertisement.

I actually just contacted the creator of this ad, and am awaiting his response. 27,000 commons and uncommons is $135, and 1,000 bulk rares would be $100 at the least. His initial asking price is a bit higher than what we’d like to pay, but he does have the magic words “or make me an offer” included, so he probably needs the money. In addition, there were some other notables as I scrolled through the list, like [card]Braid of Fire[/card], [card]Defense Grid[/card], and [card]Porphyry Nodes[/card]. Depending on what else I see when I meet with the owner, there’s a good chance that I’ll be able to make an offer somewhere around $250 cash, and drive home with the collection. Even if there’s literally nothing in the 28,000 pieces of bulk (which I highly doubt), we didn’t overpay, and we can make our money back immediately to any number of buylists if we have to.

New players and parents alike love the term “instant collection”, and you probably have the pieces to make them. All we need is a bunch of mixed color commons and uncommons, long boxes, basic lands, a few bulk rares, and maybe a decent rare that’s worth a couple of dollars. Throw it all together, and we have the magic power to turn “bulk” into a “collection”. Let’s take a look at an ebay listing that has over 150 completed sales, so we know that it works: 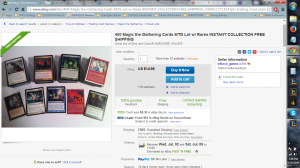 If you put 400 cards in a box, you can probably ship for just over $5. After ebay fees, you’re probably making $7-8 dollars, but that’s certainly better than $6 per thousand by throwing them up on Craigslist. However, this path certainly involves more effort. You have to set up the eBay account, create the listing, constantly make enough collections to sell, make sure that there’s not more than a playset of each card, and deal with online feedback and such. I personally already feel like shooting myself after dealing with bulk commons and uncommons, so I don’t want to put more effort into something like this. I have, however, created instant collections to sell locally. It’s much more rewarding and satisfying to sell to someone who will continue to be a friend and customer as they progress in their Magic lifetime.
For a quick recap before I head out to climb a mountain in the Alps and meditate alone while trying ot come up with a topic for next week: Craigslist, Facebook, and other dealers are your fastest methods to dump bulk commons and uncommons that you’ve picked over. If you’re interested in getting creative and putting more effort in, try your hand at eBay or Amazon lots, price competitively, and play the waiting game. In order to buy the lots that you want to pick and sell, be sure to never go above your decided rate, never pay for what you don’t see, and be vocal. Thanks for reading, i’d love to hear stories of your past collection buys, and tips that you used to make the most to turn [card]trash to treasure[/card]!

@Rose0fthorns     -     Email     -     Articles Douglas Johnson is a 20-year-old MTG player who goes to college courtesy of a scholarship from Gamers Helping Gamers. He is currently found writing a weekly finance column at MTGprice.com, and you can always feel free to contact him on Twitter, Facebook, or Reddit.
Previous Episode:
Pitt Imps Podcast #76 – One More Than 75
Next Episode:
A Bearish Outlook for Magic Speculation