(Cold)snap Back to Last Week

Welcome back, readers of Brainstorm Brewery material. I think I’m getting into a routine where at the beginning of each article, I’ll bring up an insightful comment from the previous week to bring full attention to it. Last week we scratched the surface of token finance, and I forgot to mention one of the more expensive tokens that currently exists. Reddit user one_among_the_fence brought up the Marit Lage token from Coldsnap. Made by [card]Dark Depths[/card], this 20/20 creature is the second-most expensive item from Coldsnap, coming in at $20, losing only to [card]Dark Depths[/card] itself. Not everyone wants to use Gerry Thompson as their Legacy Lands win condition, and because it was a promo for the release of the set, I highly doubt that we’ll see any more printings of the token. If you plan on putting 20/20 flyers into play and want to use the real thing, I don’t think picking them up now is a bad idea.

The week before Tokens, we briefly went over the definition of the word bulk when referring to Magic cards. However, I didn’t go into detail on what financial relevance bulk commons and uncommons can have. These aren’t the cards you see in your local FNM binders, or in the display case at your LGS. In this article, I want to start talking about how you can make money off of the four or five opened Return to Ravnica booster boxes sitting in your friends’ closets that are full of [card]Catacomb Slug[/card]s, [card]Sellers of Songbirds[/card], [card]Axebane Guardian[/card]s, and [card]Izzet Guildgate[/card]s. We’ll go over methods of picking your bulk, how to organize it, and the various methods to get rid of it for a profit.

Literally forever ago (well, back in January), I wrote an article about a bunch of commons and uncommons that were worth “picking” out of your collection to sell or trade separately, but I never really went over how you should go about it. If you buy a collection of commons and uncommons and you know it hasn’t been touched since the owner pulled all of the rares out, you want to have a definitive strategy to maximize your profits and minimize time spent on the project. Set a baseline for the value of cards that you’ll pull out from your bulk. My personal number is $.10, and you can find that price on a buylist aggregator like mtg.gg or mtgprice.com. I took some advice from our own Jason Alt on this matter, and separate my picks into multiple different piles. I have a separate pile for actual “picks” like [card]Lightning Bolt[/card], [card]Springleaf Drum[/card], and [card]Go for the Throat[/card], one for cards that don’t sell on a buylist for more than a dime but I know people at my LGS will need on a regular basis ([card]Titan’s Strength[/card], [card]Gods’ Willing[/card], [card]Spiteful Returned[/card]), a pile for each basic land, tokens, random foils, and anything considered MP or worse in condition.

The “picks” box gets alphabetized and sorted by color, as do the tokens, and the “not yet picks.” This makes them easy to buylist, and easy to find when a friend needs a set of [card]Grey Merchant of Asphodel[/card] five minutes before FNM. The MP/HP cards get thrown out, and bulk foils get their own box to eventually be bulked off as well. I sort the basic lands by type, because I often make custom starter decks for new players, and I plan on running local drafts at my college soon, so it will be easy to grab handfuls of a specific color. If you don’t give a damn about your basic lands, you’re in luck: we’ll go over how to get rid of those in bulk later on, because this article will probably be a two-parter.

Who Wants These Cards?

Now you’ve got your box of picks, and a ton of Magic’s forgotten heroes. The draft leavings that we deserve, but not the ones we need, or something to that effect. The stuff that people who have attended a $40 tournament won’t think twice about ripping in half. Who could possibly want these cards? Believe it or not, there are Magic souls whose hearts haven’t been tainted by the seriousness of competitive play. They play on a level of casual further than any [card]Hermit Druid[/card] EDH player could imagine. They just like owning cards and building as many 78 card unsleeved decks as possible—and there’s nothing wrong with that. So how do we make sure our cards get to them?

Most people already know this, but it deserves to be said anyway. The absolute baseline for what you should be getting for 1,000 Magic: The Gathering cards is $5.00. I would never sell for anything less than this, just because there are so many stores and aspiring dealers who will pay that amount to either turn and resell, or go treasure hunting themselves. There’s no shame in accepting this price and saving yourself a ton of time, especially if you have a massive amount of cards. I’m currently sitting on at least 100,000 extra cards myself, and considering just accepting a $5 per thousand flat rate if the person is willing to pick them up at my place. If you want to dump them off at a GP, be sure to check with all of the attending vendors well in advance to set up a time and number that they’ll accept. You don’t want to be driving back with all those cards after learning none of the vendors are interested.

Yes, I bring up Craigslist and Facebook in almost every article, and you’re probably sick of it. But selling directly to another individual who is interested in your product to actually use and not resell, without having to go through a secondary vendor that costs money (read: eBay), is honestly the best way to go. Let’s look at an example advertisement: 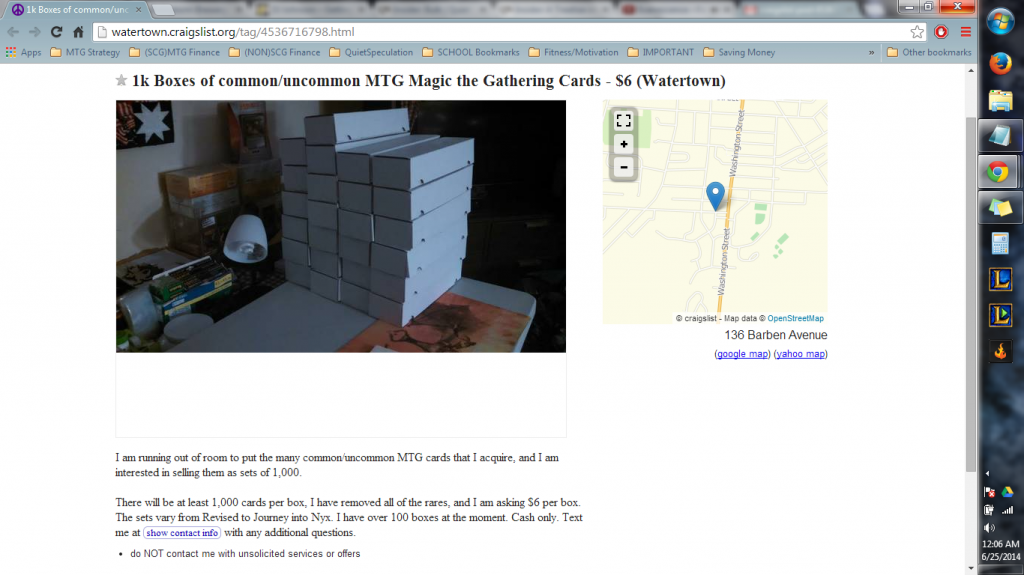 Our title is informative, we gave a price, a sample picture of what the customer will be receiving, and made sure they know that it’s not just a billion cases of Born of the Gods. I also recommend that you remember to put the words “cash only” in your advertisement, or else you’ll be constantly spammed with scam offers who want to PayPal you after you ship the cards to god knows where.

I am Not Counting 1,000 Cards Over and Over Again

What if I told you that you don’t have to? Another trick that I learned from our Jason Alt is that the height of a Magic card on its side is exactly 200 unsleeved cards wide. This makes it much easier to estimate piles of 200 (err on the side of caution and estimate in the customer’s favor), and fill your long boxes that you bought in bulk with approximately 1,000 bulk Magic cards, ready to ship or do what you want with.

I’m out of space this time, so I’ll be back next week with part two of dealing with your bulk commons and uncommons. In the meantime, hit me up with any questions on Facebook, Twitter, Reddit, the comments section here, signal flare, or telepathic Morse code.

P.S. This is the Part Where I Give You Names of Cards to Speculate On

Except I don’t have any this week. If you’ve been checking your mtgstocks.com every day and have been following MTG finance for a while, you’ll know that summer is generally a very boring time of year for price changes. Other than Conspiracy and upcoming M15, we’re in a rut where we don’t see Modern prices rocketing all over the place. My advice for the next few weeks is to stop looking for the “next big spike” and take some time to organize your collection. Ship off those bulk boxes, do your huge buylist orders now, and set up that online trading list you always wanted to make. Come autumn, we’ll be getting back into a spoiler season people actually care about, and a brand new Standard metagame. Get your busywork done now so you’re cleaned up and ready for the rush when it hits!

@Rose0fthorns     -     Email     -     Articles Douglas Johnson is a 20-year-old MTG player who goes to college courtesy of a scholarship from Gamers Helping Gamers. He is currently found writing a weekly finance column at MTGprice.com, and you can always feel free to contact him on Twitter, Facebook, or Reddit.
Previous Episode:
Pitt Imps Podcast #75 – Tagged by 1866
Next Episode:
Brainstorm Brewery #103 – Conspiracy Theories