Conjured Currency #28: The End of Magic: The Gathering (As We Know It)

It’s Thursday once again, and I welcome all of you back to reading more words that the Brew Crew pay me to vomit onto the internet. Thanks for that. Last week, I got an extremely positive reception to an article that involved me digging through my closet and taking a good look at my current sealed product investments. If you’re considering dropping some cash on the next new product and stashing it away, I highly recommend you skim through the article first. I’m not going to spend too much time on the past, though, because this article (and announcement) is all about the future, and there’s a lot to talk about.

The news is a few days old by the time you’re reading this, but early the morning of this writing, Mark Rosewater dropped quite the bomb on us with loads of information that can be found here. Without any further unrelated words, let’s delve into a “TL;DR” of the entire article, and then extrapolate a few possibilities for what these changes could mean for Magic, mainly from the financial perspective.

I Don’t Want to Read the Article

For the readers that the above statement rings true for, I’ll explain it as quickly and efficiently as I can. Magic has had a history of the third set in a block having an identity crisis, leaving the set to often have a bad Limited environment (see Avacyn Restored/Dragon’s Maze). It’s hard to keep people interested in the same block for almost an entire year and still maintain an identity for the third set.

Similarly, the core set has been split between appealing to a more advanced and experienced crowd, while trying to teach newcomers the basics of the game. There are also issues with the “storytelling” aspect of the game being too slow (did anyone honestly give a damn about what happened in the flavor of Dragon’s Maze or Journey into Nyx?), and not having enough time to revisit our favorite worlds while still creating new storylines. With this, we end up with two sets (the third set and the core set) being the redheaded stepchildren of the Magic year, and the need to increase the quality of the storyline and add more stories.

Do You See Where This is Going?

“Beginning in the fall of 2015, Magic will have two blocks per year.” Yep. Instead of having three sets in one block followed by a core set, we’ll be receiving two blocks per year. The first two sets will be parts of the first block, and the second two sets of the year will [b]usually[/b] be part of a second. The “usually” part seems important to me, giving Wizards the ability to backtrack and shake things up with something different, like a three- or four-set block instead. In order to make room for this, they’re chopping off the core set.

The last big announcement of the article is that cards in the fall set will no longer be legal for a 24-month period, starting with the Khans of Tarkir block. Khans will only be legal for 18 months, rotating in the spring of 2016 instead of the fall. Instead of a once-per-year rotation, Standard will rotate twice a year (once in the fall as we’re used to, and once in the spring as well). Three blocks will be Standard-legal at once, and each rotation will push out the third block behind it. In order to make the transition as smooth as possible, the last set of Khans block will rotate after its brothers have already left, making 2016 an interesting year for rotations.

Well, there are a few possibilities that immediately come to mind when presented with this new information. One of the first is that there might be fewer packs of each set opened, reducing the number of cards in circulation and likely driving the Standard staples up higher to a degree. Instead of (for example) JOU/BNG/THS, we’re losing all of the Born of the Gods and Theros packs that would have been drafted during that time, and are instead on our way to a shiny new block. Mythics and chase rares would likely see higher price floors, but for a shorter time period due to the sooner rotation.

If Wizards keeps the draft format the same as it is now (Small/Big/Big), then there will be a 5-1 ratio of “Blood” and “Sweat” respectively entering the market. While there was already a 6-2-1 ratio of a block like Theros, we’re not used to this 5-1 gap happening multiple times a year, causing staples from the second set in each block to be more expensive than we’re used to.

On the other hand, these changes could turn out great for the number of packs opened. Instead of the “third set slump,” where players are less likely to buy boxes or want to draft the third set of the block, they’re met with a brand new world, new planeswalkers, new stories, and new mechanics every six months or so. This might be enough to make up for, and maybe even surpass, the number of lost packs from the three-set draft format.

Rosewater blatantly stated in the article that one of the reasons for a more frequent Standard rotation is to prevent the metagame from stagnating as it has been of late. Wizards doesn’t want [card]Thoughtseize[/card] into [card]Pack Rat[/card] to become a two-year long happening, because that gets old quickly. [card]Sphinx’s Revelation[/card] has had its time in the sun, and I don’t think I’d be assuming too much if I guessed that a majority of the Standard player base was wishing it had left long ago.

Remember the Organized Play changes from about a month ago? The ones where players were upset about having four Standard pro tours, and eventually complained enough to get OP to reverse its decision and add back a Modern PT? Well, maybe Wizards had a reason for scheduling four Standard pro tours. It makes a lot more sense to have every PT be Standard when the format rotates much more quickly, and has three blocks’ worth of variety and different themes.

If you’re someone who tends to build a single Standard deck and tries to stick with it as long as possible in order to make playing Magic cheaper, this change might actually deter you from playing the format rather than spicing it up. If enough players decide to turn their backs on the format, we could see this change drive more people to Modern, Legacy, or even EDH. I’m personally excited to have a buylist ready for all of the Modern and Legacy staples that will be rotating out of Standard every six months, because the Standard-only players will need to dump them more often to get their hands on the fresh new block.

If you tend to speculate on fall Standard sleepers like [card]Desecration Demon[/card] and [card]Jace, Architect of Thought[/card], or just primarily deal in Standard cards via TCGplayer/eBay/buying at buylist, you have less time to dump the fall-set cards before they plummet. If you’re someone who doesn’t constantly move inventory around, it might be a good idea to start putting money and trade stock towards Legacy Reserved List cards until the storm settles.

Here’s another factor to consider. I’ll just leave this here:

I guess reprinting [card]Thoughtseize[/card] and murdering Standard for a year was worth dropping its price tag by $50. I sound cynical when I say that, but maybe it looks like a way for them to balance the amount of people who play Standard with the people who play eternal formats.  If we get reprints on the same power level as [card]Thoughtseize[/card], [card]Mutavault[/card], and [card]Scavenging Ooze[/card] in the near future, I’m on board with making Modern cheaper and easier to access for everyone involved.

It’s also interesting to note that, unlike the other “big changes” in Magic, nobody’s complaining. As far as I can tell, nobody’s getting out their pitchforks, throwing their collection into the bonfire, or rioting at WOTC’s door. Everyone (myself included) seems to just think, “Huh. Yeah, that does solve all of those problems, and sounds very exciting. I look forward to these changes in the future.” 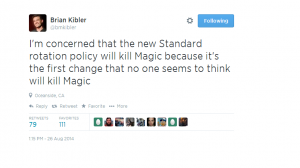 One way or another, this is such a huge change that it’s impossible to complete the puzzle just yet. We just had a nuclear bomb dropped on our precious little system that we thought we had figured out, and there’s a lot of traditions and systems we had in place as financiers that just go straight out the window. It becomes a lot harder to say, “X will happen on Y date, so sell Z card before A happens,” when we’re going into uncharted waters.

Is there anyone out there who hates these changes? If so, what’s your reasoning behind your opinion? I’m curious to see if everyone is as excited for these new developments as I am. It certainly stirs up the financial world of Magic like few things have, and I certainly can’t even begin to fathom the depths of all of the possible results of this announcement alone, especially in only 1500 words. Does anyone want to help me out and provide some comments on what else could happen as a result of switching to a two-block format while removing the core set from the equation?

@Rose0fthorns     -     Email     -     Articles Douglas Johnson is a 20-year-old MTG player who goes to college courtesy of a scholarship from Gamers Helping Gamers. He is currently found writing a weekly finance column at MTGprice.com, and you can always feel free to contact him on Twitter, Facebook, or Reddit.
Previous Episode:
Cube Drafting Storm — by Rowan Sheehan
Next Episode:
Brainstorm Brewery #112 – Altered Reality

4 comments on Conjured Currency #28: The End of Magic: The Gathering (As We Know It)