Welcome back, individual readers of BrainstormBrewery.com who conjure currency (or cards) based on the information in this weekly column. If you didn’t get a chance to read last week’s article, I highly recommend it. If you’re either in the market for dual lands, or getting maximum value out of dual lands that you currently own, you can secure some useful information there. Without wasting any more time (this is a segue, I swear), let’s go back in time even further to two months ago when I reviewed M15. Spoiler Alert: my review was almost entirely incorrect. I predicted almost every card in the set to plummet in value, when in reality almost all of them stood their ground or even increased in value.

I said back then that I would do a “review of my review” during this week of Conjured Currency, which allows (forces) me to look back at my now cringe-worthy predictions and analyze what went wrong, and where I could change my behavior or thinking for the future. 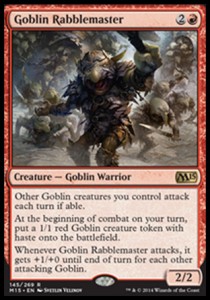 Let’s get this out of the way so I can talk about something that I think is much more interesting and useful. My predictions for M15 were…less than accurate. I overestimated the amount of the set that would be opened, and my lack of ability to properly evaluate Standard-playable cards ended up costing me my one-way ticket on the [card]Goblin Rabblemaster[/card] hype train. M15 was a breath of new life into the concept of core sets, but that didn’t prevent the community from giving it a large, “Meh,” as we anxiously await the destruction of all core sets once and for all. As such, there was a lot less of M15 product opened. Nissa and Garruk destroyed all that I knew and loved, and they maintain (or are higher than) their preorder prices. The same can be said for almost every rare/mythic in the set.

“But DJ, how will this help you prepare for the future?” Well, nameless voice that asks rhetorical questions, I’m glad you asked. I personally took this stance quite a while ago—ever since I got stuck with more than 40 copies of [card]Ghave, Guru of Spores[/card] that I correctly called but was unable to actually profit off of. I’m done with speculating. Yep. 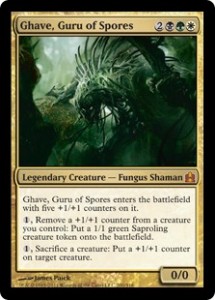 Well, let’s give a more operational definition. Ever since May of 2014, I’ve officially stopped buying cards for the purpose of awaiting their price increase to sell at a later date. I’ll still trade random jank for other random jank that I believe has more potential, but no more buying out SCG of singleton Commanders that end up tripling in price with zero outs in sight.

There’s too much risk involved, with so very little room for reward other than being able to say, “Called it!” at my LGS. Your order has to not get cancelled (which, let’s be honest, has been happening more and more lately), the card has to double or sometimes triple for you to even make a semblence of a profit, and you have to liquidate your copies before everyone else in the world races to do so at the same time, or else you’re left with a pile of hot garbage.

Speculating is the Worst Thing Ever

Well, it might not be, at least for you. I just made it sound like it was, because of a few of my personal experiences with that particular MTG finance method. I’ve had my fair share of wins (PT Theros paid for a year of my Quiet Speculation subscription with [card]Master of Waves[/card], [card]Nykthos, Shrine to Nyx[/card], and [card]Thassa, God of the Sea[/card]), and my share of losses (RIP [card]Duskmantle Seer[/card]—never forget). However, it’s just not my thing anymore. I don’t play competitively enough (read: at all) to keep up to date on the constantly shifting metagame of Standard or Modern, so I don’t recognize the potential for new tech when it exists. My “new card evaluation” skills are obviously lacking. 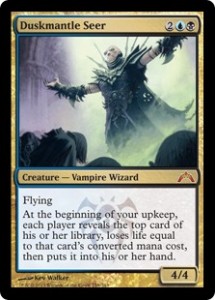 However, each of our individual cases is different. When I first started writing for Brainstorm Brewery, I realized that it would be difficult for that exact reason. I’m writing to a crowd generally interested in MTG finance, but that can mean entirely different things to two people. On one hand, you might be ready to open up your own store and have tens of thousands of dollars to spend on collections using techniques that I teach in my articles. On the other hand, you might be barely scraping the cards together for a tier-two Standard deck to play at FNM. Our goals in MTG finance can be different, and so can our methods.

Speccing is the Best Thing Ever

And it is, especially for me. Wait, wha..? Yeah. Speccing. Spec(ialization). See what I did there? This entire article so far lead up to that pun. I’m throwing spec(ulation) to the wind, and I’m going to try and focus on a fewer, more concentrated aspects of Magic finance that I tend to do better in. For me, that’s collection buying, selling on social media, picking bulk, buying singles at buylist prices locally, and selling locally at TCG low. Yes, I just realized I started a paragraph about specialization and listed five different tactics, but you get the picture. I’m working on condensing my area of expertise, and cutting off the dead weight where I don’t tend to do well. And you know what’s great? This is customizable for you as well, whoever you are.

Maybe you’re awful at recognizing the nitty-gritty dime and quarter cards in a 5000-count box of commons and uncommons, but you’re a legendary Standard grinder, and can pinpoint the exact card in Khans of Tarkir that’s going to be the next [card]Courser of Kruphix[/card]. In that case, go for it and buy as many of that card as your piggy bank will allow. If you’re confident in your outs and your ability to predict the Standard metagame, then ignore everything I said about speculating and focus on your area of specialization that nets you the most coin.

In order for this to work out for you, it takes a good amount of self-analysis. Cleanse yourself of that cognitive dissonance and open your eyes to your strengths and weaknesses. Take a good look at the last collection you bought, or the last buylisting adventure you undertook. Were you able to maximize your profits? Did everything go according to plan?

Also, don’t be afraid to dabble. If you’re new to the wonderful world of Magic finance and have never bought a collection before, head on over to Craigslist and discover the wonderful world of people asking $400 for a box of water-damaged Fifth Edition commons (I say that, but there are some gems there if you check consistently enough. Use Google Chrome Page Checker or something similar to get updates about new listings). Learn what you’re good at, and learn what you’re not so good at. It takes practice, and it takes trial & error.

Not a card to spec on, but what’s your area of specialization in Magic finance? I’ve personally had the best luck with buying and sorting collections, because it requires the least amount of knowledge about the current Standard/Modern metagames, and I’ve always felt at home with a box of unpicked commons and uncommons.

If you’re still with me, I’d like to share a story about the most recent collection I just bought. After discussing the collection a bit with the seller over text, I learned that he was a casual player who had never attended a tournament in the 15 years he’d been playing the game. Awesome. I love casual players. After flipping through binders of rares and uncommons, it was clear to me that this man had no idea what any of his cards were worth. He had toploader-ed all of his Mythics, but proxied them in his unsleeved decks proudly labeled “ANGELS” “DEMONS” “VAMPIRES” “ASSASSINS”, etc.

While going through the land binder, I saw a [card]Sunpetal Grove[/card] or two, some bulk rares, a couple of shock lands, and… a foil [card]Scalding Tarn[/card]. Unsleeved. In mint condition. Obviously never touched. I immediately asked for a sleeve, and informed him of the find. I told him that the card was worth nearly $200 retail, and was surprised to see it hanging around unsleeved. Since he played casually, he never saw the point of paying one life for a land. That, and he never made a UR deck so he didn’t need it. 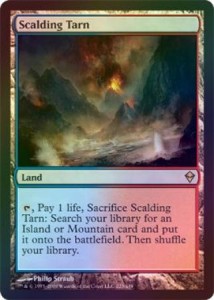 When it came time to discuss the price of the collection, I had found tons of additional goodies during my quick scan of the binders and mythics. I did some quick mental math after estimating the bulk commons and uncommons, and threw out a number. “How’s $700 for everything?” I wasn’t about to go higher, considering that was all of the money I had brought, not expecting a nice piece like this. He replied, “How about… $600? I want to thank you for being honest with me about the cards in this collection. You could’ve totally ripped me off, because I don’t know a damn thing about card prices. You handled this truthfully and professionally, and I appreciate that.”

Honesty pays, even literally sometimes. Until next week.

@Rose0fthorns     -     Email     -     Articles Douglas Johnson is a 20-year-old MTG player who goes to college courtesy of a scholarship from Gamers Helping Gamers. He is currently found writing a weekly finance column at MTGprice.com, and you can always feel free to contact him on Twitter, Facebook, or Reddit.
Previous Episode:
Weekend Magic: 9/12-9/15
Next Episode:
Brainstorm Brewery #115 – Khans Set Review