Getting LUCKy: Acting Too Quickly 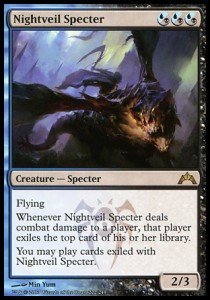 It’s round four at SCG Detroit. Across from me is Joe, who is playing Mono-Black Devotion. He swings in with a [card]Nightveil Specter[/card] to deal two, but what do I care? I’m playing Gruul Aggro with [card]Skylasher[/card], [card]Titan’s Strength[/card], and [card]Armed // Dangerous[/card] in hand. He plays a second [card]Nightveil Specter[/card] and I panic. I still play my [card]Skylasher[/card] end of turn and pray for a [card]Ghor-Clan Rampager[/card]. Top-deck is…[card]Temple of Abandon[/card]. He’s only at 12. If I could just trample over it I’d be fine. Next turn he plays a [card]Desecration Demon[/card] and proceeds to pummel me.

After losing games two and three to Joe, Brainstorm Brewery’s very own Ryan Archer, who was playing next to me (who is now 3-1 to my 2-2) asked, “Why didn’t you block with [card]Skylasher[/card] that turn, you know he’s pro-blue?” My first thought was “And?” before it dawned on me that [card]Nightveil Specter[/card] is blue. I had game two won on turn four and didn’t slow down long enough to realize it. RTFC Caleb! How many times has this happened before? I knew this when I didn’t side them out game two but didn’t slow down enough to take advantage of it. All of this thanks to my ready, fire, aim mentality.

But Caleb, I know [card]Nightveil Specter[/card] is blue. I mean, half the card is colored blue. I know that all my readers out there know this and would have been 3-1 rather than 2-2. But how many times have we been hasty in other areas? How many sideboards have been made fifteen minutes previous to the tournament? How many cards have been sold only to peak a month or two later? When we aren’t “smelling the roses,” our decision making process has been crippled. There are decisions that we have made that we all wish we could go back and fix (*cough [card]True-Name Nemesis[/card]). But how do we make ourselves slow down? 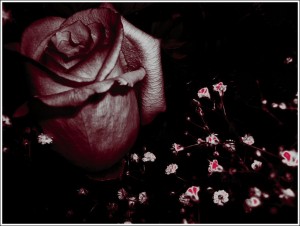 Take a deep breath before every play. It sounds so cliche it’s not funny, but it’s cliche because it works. If we consciously take a breath before we move to attack step, we then realize [card]Arbor Colossus[/card] has reach. Probably not a good time to swing with [card]Stormbreath Dragon[/card], but awesome for our [card]Boros Reckoner[/card]. Maybe we were going to cast [card]Goryo’s Vengeance[/card] end of turn. Making a habit of breathing makes us reflect for just one second, makes us take a look at the whole picture. Most of the time our problems only need a single second to be discovered. I can’t count the number of times I have forgotten to play [card]Lightning Bolt[/card], only to remember during my untap step.

How does this help with finance, Caleb? Well, most of the time one breath won’t do. But my breath isn’t a breath at all. My breath is a tweet to #mtgfinance, a post to the QS forums, or even just an episode of Brainstorm Brewery. If the move I’m making lines up with what the Brew Crew is saying, we are probably on the right track. Without the “breath,” we tend to make decisions based on emotions, which can be wrong. There is plenty of sound financial support if we reach out. A second opinion is almost always relevant when money is involved.

Look at all your options. When playing, look at your entire hand and think of everything that could be in theirs. Is there a better play, or line of play that I could make? Should I be playing the safest line, or the fastest? What do I gain by going with one line over the other? These are all things we should look at before we make our plays. The better we get, the better our plays, but we must be careful not to let this keep us from thinking.

When we are dealing with finance we should also look to all options. Is it better to buylist this, or sell it on TCGplayer? Do I know someone local looking for this card? Could I trade up for something that helps me more? Is it worth taking a chance on this collection or would my money be better placed into speculations? Try to look at everything that could be done with cards/money before moving in on something. Jumping on the first thing you see is like keeping a hand when you’ve only seen one card in your hand.

Be conscious of your opponent’s pace. One of my favorite ways to throw an opponent off is to play faster that they are used to, or slower than they are used to. I know that if I can get them off their game, they will make mistakes. That is one of the reasons I picked Gruul Aggro. I have much experience with this kind of deck and it allows me to make opponents play at a pace that causes them to make mistakes. With an aggro deck, I’m able to capitalize on those mistakes very quickly. If your opponent is setting a pace that you aren’t comfortable with, slow it down. For one, you will make fewer mistakes. And two, you will cause opponents to make mistakes because they aren’t at their own comfortable paces anymore.

Buying, selling, and trading is the same way. One of the ways a shark will get you in a trade is by making you rush. When you are rushing, he will always win. Not that he shouldn’t win, but you should too. When buying, take your time, look at everything that you are buying. When you slow down, it will already put you at an advantage. Look closely at card condition, pause on certain cards. This will cause the seller to really think of what they have and reevaluate the value of his cards.  This is one of my favorite ways to keep sellers from having an inflated sense of where their cards’ real cash value is before I make an offer. If someone is moving too fast for me, I maintain my walk-away power. You don’t need to be swindled into overpaying or overtrading.

SGC Detroit did get a little better for me. I lost one more after that placing me at a 2-3 record. I decided since it was a $40 entry I may as well at least get my $40 worth out of the day. The next five games went without a serious hitch and I was able to finish with a 7-3 record for 60th place and a fifty-dollar bill, taking “The Price of Magic” down. I also beat Deshaun Baylock, which is always a goal for me, especially when he’s playing control (dude’s a beast with control, seriously). [card]Armed[/card] was the card of the day for me. I felt like I still got LUCKy, just not quite as LUCKy as I would have liked. And just like everyone else, if I want to start Getting LUCKy, I need to slow down.

What is your [card]Nightveil Specter[/card]? When should you have taken a “breath” before making a play/ buy/ sell/ trade?