GP Detroit has come and gone, Theros has entered the standard card pool, and yet I still can’t help but have modern on the brain! The format is very diverse and I feel that so long as you are playing a powerful combination of cards you are going to be able to win plenty of matches.

One card I’ve also been enamored with is [card]Isochron Scepter[/card] . This card has a powerful effect that you can easily abuse if you build your deck correctly. The first step to this abuse is building a deck that can survive in the current metagame.

Are you aware of how hard it is to play a deck based on a two mana permanent in a format that contains [card]Abrupt Decay[/card]? Here is a dirty little secret – it isn’t if you are doing it right. Let me introduce you to my little friend: 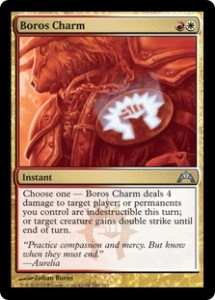 With that in mind I’d like to talk about two deck lists today that utilize [card]Isochron Scepter[/card] and [card]Boros Charm[/card].

First – the name. The name comes from what I am assuming was an auto-complete error a friend of mine made while messaging me about the deck list. I was amused by it, so it is staying as such.

Now – on to the actual cards! I really enjoy this deck because it can assume one of a few different roles depending on your draw. Sometimes you play a [card]Delver of Secrets[/card] on turn one, flip him to a [card]Boros Charm[/card] on two and then [card]Remand[/card] or [card]Mana Leak[/card] your opponent’s relevant spells until they die.

Other times, you are just a burn deck. We sport a whopping forty-eight points of reach in our main deck – not counting our three [card]Snapcaster Mage[/card]. Once your opponent shocks themselves or fetches a few lands, it is not hard to close out a game. I do not think I have ever lost a game with this deck where my opponent had an active [card]Dark Confidant[/card] – because while it is drawing them more cards, it is also getting them dead faster!

Finally, we can assume a more controlling role – this is where the Scepters really shine. Our nine main deck pieces of counter magic combined with twelve pieces of spot removal can make it extremely difficult for opposing decks to maintain a board presence. Once you get to four mana you can slam an [card]Iscochron Scepter[/card] and attach a [card]Boros Charm[/card] or [card]Lightning Helix[/card] to it. There aren’t many decks in the format that can keep up with a six point life swing every turn that doesn’t cost you any cards!

Don’t have a [card]Lightning Helix[/card]? How about we just dome our opponent for four damage every turn with a [card]Boros Charm[/card]? No charms around either? Slide a [card]Magma Jet[/card] onto that Scepter and ensure you will almost never draw a bad card for the rest of the game while you kill small creatures or chew away at your opponent’s life total.

That leaves me with just three other cards I’d like to touch on before I get to the side board. First we have a couple more pieces of Scepter protection: 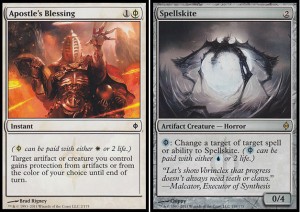 [card]Apostle’s Blessing[/card] is a card that sees far less play. Blessing is a card that can easily save either our [card]Delver of Secrets[/card] or [card]Isochron Scepter[/card] for just a single mana. Unlike the [card]Spellskite[/card] which sits on the table, Blessing forces our opponent to pull the trigger on trying to kill our threat, and then blows them out. 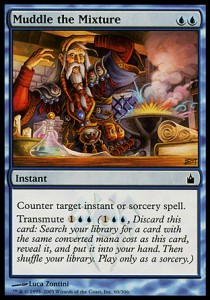 Need a Scepter to strap that sweet spell onto? Transmute your Muddle and go find one. Already have a sweet spell, but need a Scepter to put it on? Transmute Muddle for one! Already have both pieces of your combo are you are worried your opponent has a removal spell? Transmute Muddle for an [card]Apostle’s Blessing[/card]. Your opponent is trying to kill your Delver with a [card]Lightning Bolt[/card]? Counter it with Muddle.

It slices, it dices, and it gets us whatever we want in our deck full of awesome two drops.

The sideboard is still a work in progress, but I’ll share my logic on why the slots currently are what they are.

We start with three additional methods of protecting our Scepter from removal:

That gives us nine protection spells post board – this should be far more than any deck has in terms of removal for our scepter.

Next we supplement our main deck counter magic: 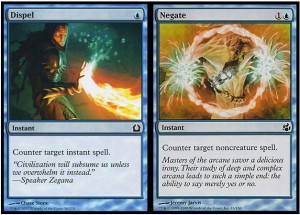 As well as improve some of our removal for decks with fat/resilient creatures: 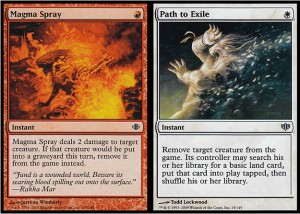 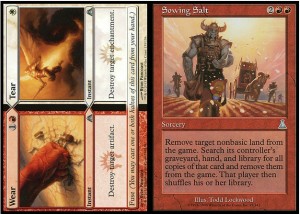 At this point I’ve played a couple of daily events with this deck list as well as a number of two/eight man queues. From my experience I would evaluate its matchups against the more popular decks in the field as follows:

This next deck list is a bit less tested than the UWR Scepter deck, but I think it also has a few fairly powerful things going for it. The first is the ability to lock our opponent out of drawing cards by strapping a [card]Funeral Charm[/card] to our [card]Isochron Scepter[/card]. A second is the sweet interaction that we had in standard for a few months: 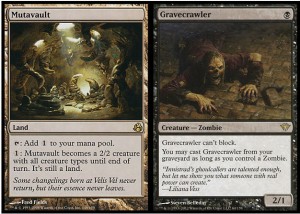 So on top of our Scepter providing us a constant flow of action we will have a steady stream of zombies beating down on the ground.

I’ve yet to put together a sideboard for this list, but if I were to do so it would start with filling out the set of [card]Path to Exile[/card] and at least a couple more pieces of hand disruption.

I hope you enjoy activating [card]Ischron Scepter[/card] as much as I do. I definitely think the UWR version of the deck is competitive and from the few games I played with it, the BWR version might have something to it as well.

My next major modern event is the TCGPlayer Invitational 50k at the beginning of November – it is split standard/modern formats. I’m heading to Cleveland this weekend though to battle it out in standard and legacy at the Starcity Open. If you see me there, feel free to say hello. 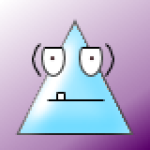