No Time to Waste – Brewing for Oath of the Gatewatch Standard 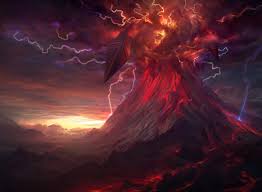 The spoilers are out.  All of them. The complete card list for Oath of the Gatewatch was finally released just a few days ago. A lot of cards caught my eye. A devoid, conditional [card]Rampant Growth[/card] variant looks to push the ramp decks’ abilities to get their game plan rolling faster than ever, despite putting heavy restrictions on deck building. Black gets a very solid, cheap piece of instant-speed removal, though it requires BB to cast. The Oaths themselves, legendary enchantments that represent the commitment of Nissa, Jace, Gideon, and Chandra to defend Zendikar from the Eldrazi, all look to be possible role-players in the upcoming Standard format. Despite having a tumultuous spoiler season plagued by unintended leaks (and the consequences for said leaks threatening to tear apart our community), I’m quite excited and impressed by this set. 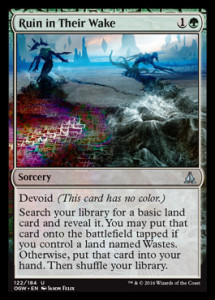 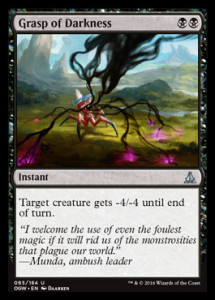 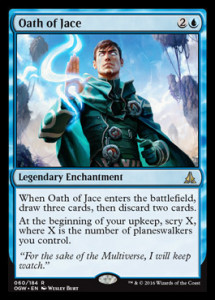 So, why am I so impressed with Oath of the Gatewatch? This set offers a LOT to each type of player. Whether you’re a Timmy, Johnny, or Spike, you’re going to find a large number of cards you can’t wait to play with. Furthermore, this set looks to have not just a fairly high power level with some eternal format implications, but from the perspective of Standard playability, it looks like it has a fairly flat power level.  At various times in the modern history of Standard, many of the cards from Oath would be highly playable. As of late, Wizards of the Coast seems very committed to having a high level of deck diversity available in Standard, with multiple competitive options for both Timmy and Johnny, not just Spike. The reason I bring this up is I have some very serious Timmy and Johnny tendencies.  I like doing big things and I absolutely love brewing to maximize synergy and value.  That said, I like to win.  What’s of even more personal value to me than winning is brewing or tuning decks that others win with.  The ultimate accomplishment for a brewer is to create a deck that not just wins a tournament, but becomes a known part of a metagame. It’s a very difficult goal to achieve as the Magic community as a whole is very intelligent, competitive, and innovative. So, as a brewer, I have to analyze my brews through the lens of a Spike.

I know I have an affinity for Jund decks and had moderate success with them shortly after Battle for Zendikar was released.  Before the community saw the first spoilers, I was hoping there would be more support for a Jund strategy in Oath of the Gatewatch, and was the color combination in which I wanted to brew.  The first card that really caught my attention was Goblin Dark-Dwellers.

No, it’s not [card]Snapcaster Mage[/card], but I don’t care.  It’s like Snapcaster Mage.  That’s all I need.  As soon as I saw the potential for value I was hooked.  I knew I would be brewing around it. 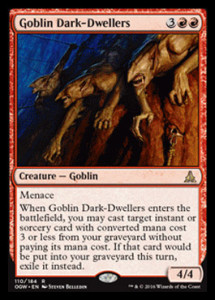 I made a mental short list of every instant and sorcery I could see myself flashing back with it and filed it in the back of my mind, waiting for additional spoilers before writing down potential deck lists.

The next card I was impressed by was Chandra, Flamecaller. 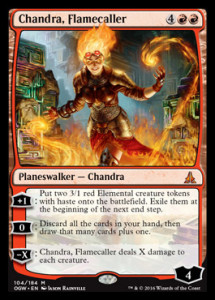 Chandra is really interesting.  As other writers have pointed out, you almost need to look at her minus ability first.  It’s the board-impacting ability, the ability that actually helps when behind on board.  At her base level, Chandra is similar to an overloaded [card]Mizzium Mortars[/card].  That is a card worth considering in the format.  The other abilities are, in my opinion, upside.  If 4RR for a sorcery that deals 4 damage to each creature is playable, then Chandra is playable.  The fact that she can be both a potent threat on an empty board and a source of card selection and card advantage are icing.  I don’t know if Jund becomes the best shell for her, but she definitely stood out as a possible curve-topper in the right deck.

The card that almost forced me to put pen to paper was Sylvan Advocate.  Without trying to abuse its ability to pump land creatures, this card screams midrange.  Right now, the Standard format is full of cards that cost three, four, and five mana that are good rates, powerful for their respective costs, and offer some form of card advantage.  What we have been missing are powerful two-drops.  Sylvan Advocate is precisely what many decks have, in my opinion, been screaming for.  Abzan Aggro has tested [card]Snapping Gnarlid[/card], [card]Heir of the Wild[/card], and [card]Hangarback Walker[/card] in that role and none seem impressive.  I would be surprised if Sylvan Advocate is not immediately adopted to replace the other options.  When playing with Jund shells over the last few months, I’ve been frustrated by the lack of a solid green, red, or black midrange two-drop creature and have felt it was a slot that had to be filled before I considered revisiting the color combination.  Sylvan Advocate looks to be the precise card I’ve been wanting (short of a [card]Fleecemane Lion[/card] reprint with a different mana cost). 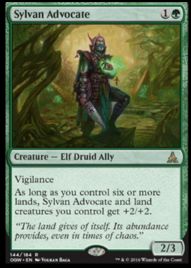 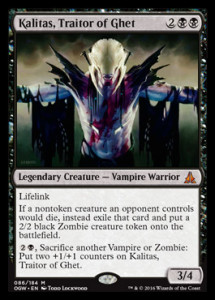 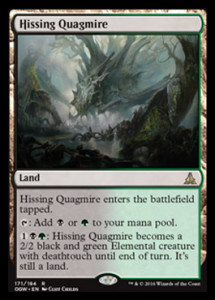 This deck may be a little too linear, a little “too cute”, but it’s built to take advantage of a moderate amount of ramp in the form of [card]Map the Wastes[/card] with creatures that work well with +1/+1 counters.  By ramping your land drops, you’re able to speed up the process of growing Sylvan Advocate, awakening with [card]Ruinous Path[/card], and generating more resources than your opponent.  Goblin Dark-Dwellers has a host of removal spells to flash back when it isn’t allowing you to replay disruptive spells like [card]Duress[/card] in the main or [card]Transgress the Mind[/card] out of the sideboard. The Dark-Dwellers is also able to flash back [card]Map the Wastes[/card] to potentially grow to be bigger than [card]Siege Rhino[/card] or just continue to ramp towards powerful cards like Chandra, Flamecaller.

The sideboard is a rough draft.  I haven’t established a predicted metagame or built a gauntlet.  I have not proxied this list and started testing to see how many cards are actively bad in each match-up.  What I do have is a number of silver bullets for 4C Rally decks (in light of its recent success).  Kalitas, Traitor of Ghet plays the [card]Anafenza, the Foremost[/card] role and the combination of [card]Dark Petition[/card] with [card]Infinite Obliteration[/card] and [card]Tainted Remedy[/card] work as ways to stop [card]Zulaport Cutthroat[/card] in its tracks.  [card]Transgress the Mind[/card] is very powerful against midrange and control decks, its power level increased substantially when combined with Goblin Dark-Dwellers.  Stealing a page out of Logan Mize’s playbook, I am relying on [card]Pitiless Horde[/card] to provide a very substantial clock to attack control and Eldrazi ramp decks alike.  [card]Outpost Siege[/card] is a great mirror-breaker in the midrange, attrition match-ups. The match-up that has the fewest dedicated sideboard slots allocated for it is Atarka Red.  Relying only on a pair of [card]Ultimate Price[/card], and, to a lesser extent, Kalitas, only makes so much of an impact.  After testing, I may conclude that the match-up requires more interaction, but Sylvan Advocate appears to be somewhat of an ideal two-drop against red.

There are a lot of other intriguing cards in the set, but the aforementioned Jund list seemed to build itself in my head.  The other, perhaps flashier, cards in the set include a new wave of Eldrazi. 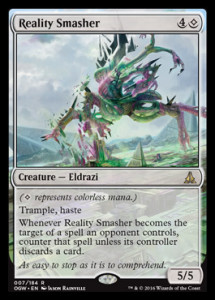 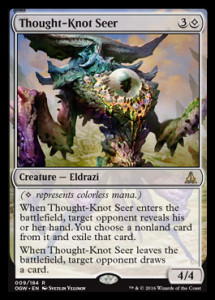 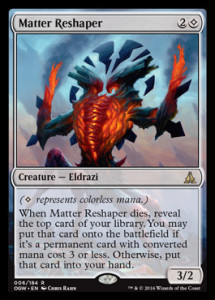 Reality Smasher is the card that speaks to me most. Thundermaw Eldrazi (ish). What we have here is a very aggressive, efficient beatdown creature that generates value if your opponent chooses to target with a removal spell. Your opponent should, in most cases, swallow their medicine and choose to remove it. I’ve heard more talk of this card and the potential to cheat it’s mana cost with [card]Eldrazi Temple[/card] and [card]Eye of Ugin[/card] in Modern, but I believe it will also have an impact in Standard.

Similar to Reality Smasher, Thought-Knot Seer is also surrounded by lots of Modern hype. It’s an efficient creature, if not the most impressive rate. It’s been described my many as a “delayed [card]Vendilion Clique[/card].” It’s disruptive, provides immediate value, and is a card that will see play if the right shell emerges. Thought-Knot Seer can also be utilized as another enabler for the Eldrazi processors, which did not receive much help in Oath of the Gatewatch.

Matter Reshaper is somewhat less powerful than the preceding cards, but is still a noteworthy value creature. It’s been pointed out that it’s a solid [card]Collected Company[/card] target, and looks to be a reasonable curve-filler.

In the upcoming Standard format, I see a potential divergence occurring.  The GR Eldrazi ramp decks will most likely continue to focus on playing out [card]Ugin, the Spirit Dragon[/card], [card]Ulamog, the Ceaseless Hunger[/card]. and potentially Kozilek, the Great Distortion.  With the addition of Kozilek’s Return, it seems like flex spots will be few an far between, leaving little or no room for some of these midrange Eldrazi threats. 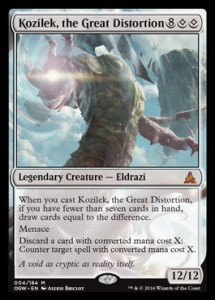 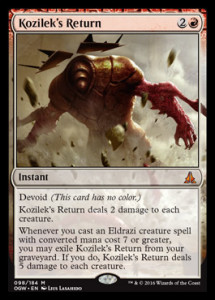 I do see the midrange Eldrazi showing up in decks containing Khans of Tarkir wedge colors.  Each wedge has access to two playsets of painlands, becoming pseudo tri-colored lands in terms of casting Eldrazi with colorless casting cost requirements.  Each wedge seems to offer pros and khans, i mean cons, as far as support goes.  My initial inclination is to explore Mardu Eldrazi. 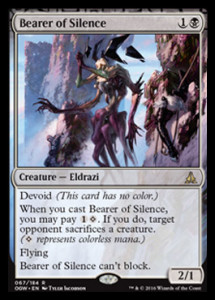 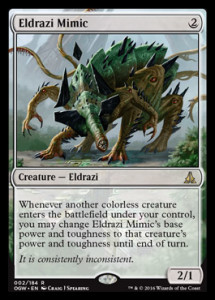 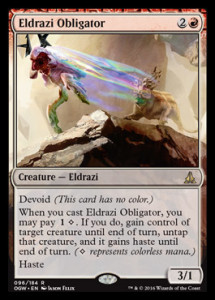 I’m not entirely sure this list is optimized or even quite quick enough with its manabase. Despite that, many of the Eldrazi are reasonably priced and create either value or tempo. If it gets off to a fast start, this deck has the tools necessary to stay ahead. Ahead on board, ahead on resources, ahead in general. Curving [card]Transgress the Mind[/card] into [card]Wasteland Strangler[/card] was a successful combination for Craig Wescoe at GP Indianapolis a few months ago. When you’re able to follow that up with Thought-Knot Seer and Reality Smasher, it should be a curve that lines up well with most of the midrange decks that are currently dominating the Standard format.

This is but one of many options for creating a wedge-colored Eldrazi midrange deck.  Temur and Abzan also offer their own advantages, but Mardu seems well-equipped in terms of diversity of threats and enablers for playing with Eldrazi processors. I’d love to see your take on midrange Eldrazi lists including what will most likely be my favorite creatures in the set: Reality Smasher and Thought-Knot Seer.