This week brought us Star City Games: Baltimore, where Modern was the featured format with a side of Standard and Legacy. Let’s dive into the results to see what innovations were showcased this weekend.

Gerard Fabiano keeps on killing it on the Star City circuit, taking down the Modern Open and continuing to add to his major finishes record. Piloting an innovative Sultai list, this deck features several cards that were previously unseen at the top tables of Modern tournaments. Highlights from the deck include two [card]Thragtusk[/card], two [card]Ashiok, Nightmare Weaver[/card], a single [card]Jace, Architect of Though[/card], two [card]Damnation[/card], and two [card]Creeping Tar Pit[/card].

Ashiok is currently out of stock at Star City Games at $18. The planeswalker is definitely on an upswing from the lows it experienced back around the $9 price point. 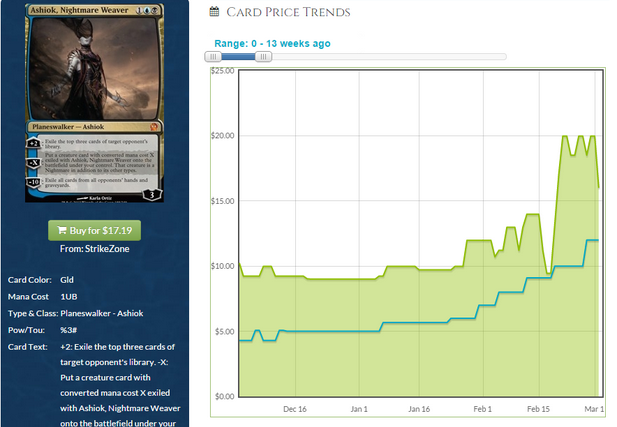 This is the type of card that casual players salivate over, so the casual demand in addition to the Standard and now Modern demand of the card will bolster the price in the short term. U/B Control in Standard will continue to be a deck thanks to [card]Crux of Fate[/card] and other cards, so Ashiok seems well positioned in the Standard metagame. Of course, as the summer lull approaches the planeswalker’s price will drop back down a bit but I can’t see it ever going below $10 again. I will definitely be watching for deals on Ashiok during the late summer and through rotation.

Going back to Gerard’s deck, [card]Jace, Architect of Thought[/card] is also quite cheap at $3 or less. This is due to the Duel Deck printing but now that it’s possible for Jace, AOT to have a home in Modern, I could see this price starting to tick up over the next few months.

[card]Thragtusk[/card] is also cheap at $2.50 and less—this was a card that was once $25 or more when it was in Standard. Could we also seen an upswing in Thragtusk prices as well? Foils seem cheap to me if you can get them for $8 or less.

[card]Creeping Tar Pit[/card] is among the cheaper of the Worldwake manlands at $9 per copy. I would caution a MM2 reprint here, though—the Worldwake manlands could easily be included in MM2 or even another supplemental product like Commander. The only reason to pick them up is If you can quickly flip them based on the hype of the Sultai win, because I don’t think the risk of waiting to see if they are in MM2 is worth it. The same could be said of [card]Damnation[/card]—another card players have been clamoring to see reprinted, and already with a hefty price tag, I would stay away from [card]Damnation[/card] with the looming MM2 set on the horizon.

Rounding out the rest of the Top 8 were two copies of U/R Twin, 4-Color Control, Jund, Temur Twin, Temur Moons, and W/B Tokens.

Four-Color Control seems like a very unique deck based on the name, but is really just Jeskai Control that splashes black for [card]Lingering Souls[/card], [card]Mystical Teachings[/card], and sometimes [card]Shadow of Doubt[/card]. The only financially relevant news from the deck’s result is that [card]Mystical Teachings[/card] foils spiked hard after someone saw the single copy in the decklist.

Temur Moons is a spin on the Blue Moon deck that splashes green for the one and only [card]Tarmogoyf[/card]. Out of the sideboard, it gains access to [card]Engineered Explosives[/card] and [card]Nature’s Claim[/card] as well. [card]Blood Moon[/card] has been a card that has seen a ton of play recently and has also seen a Modern Masters reprint. I’m not sure if we can expect it to be in MM2 too. If it isn’t, then I expect [card]Blood Moon[/card]’s price to continue climbing since it seems to be shining in a Modern format that mostly consists of three color decks and decks like Temur Moons (Blood Moon) that punish them. Another interesting deck choice is [card]Boomerang[/card]—a nice trick if you drop a Blood Moon, then bounce a creature (or permanent) that they can’t cast again back to their hand. Quickly, buy out all the foils just like [card]Mystical Teachings[/card], guys!

Finally, the last unique deck to make Top 8 is W/B Tokens. The notable cards from this deck include two [card]Hero of Bladehold[/card], a playset of [card]Sorin, Solemn Visitor[/card], [card]Lingering Souls[/card], two [card]Timely Reinforcements[/card], and two [card]Bitterblossom[/card]. [card]Sorin, Solemn Visitor[/card] is pretty cheap for a Standard-legal planeswalker that sees play in Mardu and Abzan strategies. He’s currently only $13.50, so I’ll be watching to see if he starts going up in price due to his Modern playability combined with Standard applications.

The rest of the Top 16 was much less diverse. Three Abzan and three Infect decks, along with Jeskai Control and Scapeshift. Abzan and Infect have been covered pretty extensively since the Pro Tour, so nothing new financially from those decks. Scapeshift also hasn’t changed much so nothing new from that deck either. Jeskai Control seems to be on a downward swing since it has a hard time against many of the new decks in the format. However, cards to watch from that deck include [card]Ajani Vengeant[/card], [card]Restoration Angel[/card], and [card]Sphinx’s Revelation[/card].

Painter took down the Legacy IQ with Jack Kitchen at the helm. Painter is what I like to call a pet deck in Legacy – which means that it is hard to pilot correctly without extensive playtesting, can easily be hated out with the right sideboard, and usually contains a card (or cards) that 95 percent of the playerbase can’t find or afford. Painter’s issue is containing a playset of [card]Imperial Recruiter[/card], where the cheapest version is the judge foil for $160 per copy. Like Lands (which also appeared in the Top 8 twice), it’s basically the same as getting [card]The Tabernacle at Pendrell Vale[/card]—the deck doesn’t run well without it and will set you back about $800 or more for a copy, thus limiting the number of players who can potentially play the deck.

Regardless, there are cards in Painter that are financially relevant. [card]Painter’s Servant[/card] (and foils), [card]Grindstone[/card], and [card]Blood Moon[/card] are all important pieces of the deck and could see gains. [card]Ancient Tomb[/card] and [card]City of Traitors[/card] seem to have come down slightly in price from their highs, but with enough exposure in Legacy events, these lands could once again bounce back in price.

Other notables from the Top 16 include:

That’s all for this week! Keep coming back for more summaries of last weekend’s Magic action.

Jared is a longtime Magic player who has been slinging cardboard since Odyssey block (back when creatures came into play). He was introduced to the financial side of Magic during Return to Ravnica block and hasn't looked back since. He is a resident of the VA area located just outside of DC. His favorite MTG formats include Limited, Legacy, and Commander. Regardless of format, he prefers making creature tokens. You can follow him on Twitter: @gildedgoblin.
Previous Episode:
Pitt Imps Podcast #107 Age of Affinity
Next Episode:
The Wealth Effect