With the banned and restricted list update looming in January, I’m surprised at the lack of discussion about it. Major changes could have a huge impact, especially on Modern.

There is no good way of accurately predicting what will be banned or unbanned, but that doesn’t mean there weren’t clues along the way. Before the B&R announcements on February 3, prices were well in flux. Although bans do affect the format, the biggest potential money makers will be the unbans. Here are the graphs for the two unbans for the previous announcement.

[card]Bitterblossom[/card] showed the most obvious movement, though it was never clear whether the movement was the result of insider buyouts or speculation. [card]Bitterblossm[/card] jumped from about $18 to $31 a week before the announcement, and at the highest point, reached $70 before settling down.

So the million-dollar question is, what are the potential unbans coming up this year, if any?

I’m not saying it’s going to happen, but here’s the only card that I picked up on my radar.

In a world where [card]Treasure Cruise[/card] exists, [card]Ancestral Vision[/card] for all intents and purposes is safe to come out to the party. While the price has only gone down since its Duel Deck Anthology reprinting, [card]Ancestral Vision[/card] would give blue-based control decks a foothold in the metagame by providing them with a much needed source of card advantage. I don’t think there is a good money to be made speculating on [card]Ancestral Vision[/card], foil copies are already $55 on TCGPlayer, suggesting that speculators have already moved in to the card. While prices will certainly move in the case of an unban, there are plenty of copies available that it would be difficult to make money off the buylist. 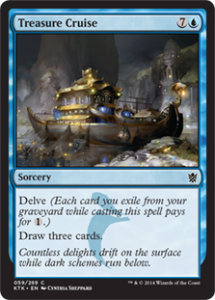 It’s anyone’s guess what would happen if [card]Treasure Cruise[/card] were to go, but I would say that Pod would displace UR Delver as the deck to beat, which has already been the case on Magic Online. As is the case for decks that become public enemy number one, hate cards will invariably come around. I liked [card]Grafdigger’s Cage[/card] at below $2, and I still like [card]Grafdigger’s Cage[/card] at $3.50 especially in the case that [card]Treasure Cruise[/card] is banned and [card]Birthing Pod[/card] remains untouched. Will [card]Birthing Pod[/card] be banned? Eventually, but who knows when? 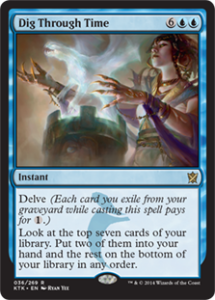 The next card is a lot less uncertain because an argument can be made for and against its banning. [card]Dig Through Time[/card] gives blue combo decks a fighting chance against [card]Thoughtseize[/card], [card]Inquisition of Kozilek[/card], and [card]Liliana of the Veil[/card]. It’s also not as degenerate as [card]Treasure Cruise[/card] as a draw engine, though arguably a much more powerful effect even at twice the mana cost. In the scenario that both draw engines are banned, [card]Steam Vents[/card] decks would once again be left to the whims of [card]Overgrown Tomb[/card] decks, and will presumably go back to the [card]Grim Lavamancer[/card] plan. In the case that [card]Treasure Cruise[/card] is the only ban, UR Delver will likely step back to its previous spot as a tier-two deck. Combo decks will definitely benefit from this shift in the metagame, particularly [card]Splinter Twin[/card] and [card]Scapeshift[/card], which have hugely benefited from the addition of [card]Dig Through Time[/card]. Because of this uneven exchange, if [card]Treasure Cruise[/card] is banned, I would expect [card]Dig Through Time[/card] to also go as it would otherwise pigeonhole blue decks to play the midrange, control, or combo game without elements of aggro or tempo. 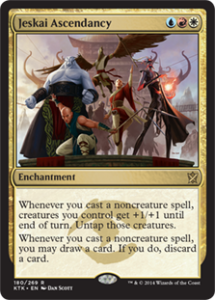 There have been discussions on a [card]Jeskai Ascendancy[/card] ban, but I just don’t see it, especially in the case of a [card]Treasure Cruise[/card] and/or a [card]Dig Through Time[/card] ban, and I’ll leave it at that.

Whatever the B&R Announcement brings, I hope that the Modern metagame will become as engaging as it was when [card]Treasure Cruise[/card] and [card]Dig Through Time[/card] were first released into the format. Khans of Tarkir has done much to shake up the Modern format, and here’s to hoping that more goodies for eternal formats will come out of this block!

@fyawm     -     Email     -     Articles Tim Enmou Gao is a writer for Brainstorm Brewery and resides in Los Angeles. A Modern-phile at heart, he is currently piloting a RUG Delver. You can reach Tim on Twitter or /u/fyawm on Reddit.
Previous Episode:
Hello from GP Omaha!
Next Episode:
Weekend Magic: 1/9-1/11