When picking which queue to enter when playing Magic Online, you have a couple of notable options. Really, the most significant option is if you’re entering a single-elimination queue or a Swiss queue. In single-elimination events, if you lose, you’re out. Prizes are determined based on the number of matches you survived before losing. In Swiss queues, you play a predetermined number of games. You generally play against people with the same record as you, though odd numbers of players can cause some mismatched pairings. Your prizes are determined by your record, not your ranking. Some bigger Swiss tournaments care about your place by cutting to a top eight, which proceeds as a single-elimination event from there.

As a good but not fantastic player, I have some very serious issues with single-elimination queues. I’m going to be breaking down the way single elimination effects outcomes. In doing this, I’m going to assume that decks and players are ranked together according to skill, where the number one player will beat the other seven and the number two player will lose against number one but beat the rest. In reality, there is more variance than this and the likelihood of a more “rock, paper, scissors” type scenario among decks, but this actually increases the issues in single elimination rather than decreases them.

Personally, I like to think of myself as the number two player when I hop into an eight-man queue. I assume that there is someone better than me in the queue, but I know that I’m pretty good and usually produce solid results. You might think that being the second best player should consistently produce pretty solid results. If I can beat the majority of the players in the queue, I should do pretty well. However, in single-elimination 8-4s, number two is a pretty bad place to be.

It’s important to understand the basic chart of how single elimination works. With eight players, we have seats A through H. The chart below shows which seat will be playing which seat in each game. What is randomly determined is who will will be in each slot. If player one (the best player) lands in seat A, I can only get to the finals if I end up in seats E through H. Meaning the number two player (second best player), has a 4/7 chance of making it to the finals by ending up in a different half of the bracket from the number one player. Even as the second best player, I have just above a 50-percent chance that I’ll make it to the finals, even guaranteeing that I’ll win against everyone worse than me. The chances for the number three player making it to the finals is only 3/14, as both the number one and number two players have to be in the same half of the bracket and the third player needs to be in the other half. 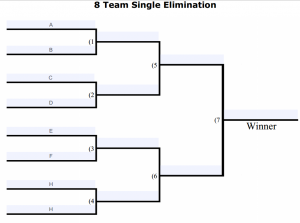 As the best player, single-elimination is clearly the best choice, because I’m likely to come out on top. But as anything but the best player, your likelihood of realizing the potential of your skill is not great.

To give a few examples of this concept, I’d like to walk through a couple of on-demand events I played at GP Portland.

The first was a Sealed queue in which I had a really strong pool. I had double [card]Raise the Alarm[/card], [card]Triplicate Spirits[/card], [card]Seraph of the Masses[/card], [card]Spectra Ward[/card], two [card]Sanctified Charge[/card]s, [card]Hushwing Gryff[/card], and [card]Spirit Bonds[/card]. Pretty much no matter what color I paired white with, my deck was going to be solid. I offhandedly destroyed my first round opponent. My second round opponent was much different. He had double [card]Festergloom[/card], and tons of removal. In this match, I didn’t have a chance. I got a pretty good look at his deck and saw he was clearly the best deck at the table. Even hearing about his opponent’s deck in the finals, it was pretty clear that my deck was second best. Unfortunately, prizes only went to the top two places, so regardless of the quality of my deck, I was out. 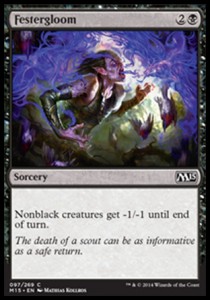 The next example is a draft in which I ended up with an amazing deck with double [card]Lightning Strike[/card], double [card]Forge Devil[/card], double [card]Covenant of Blood[/card], double [card]Krenko’s Enforcer[/card], [card]Accursed Spirit[/card], [card]Scuttling Doom Engine[/card], and [card]Heat Ray[/card]. My first round opponent was the main white drafter at the table and ended up with double [card]Raise the Alarm[/card], triple [card]Triplicate Spirits[/card], [card]Resolute Archangel[/card], [card]Spirit Bonds[/card], and a host of other solid white cards. Somehow, I managed to eke out a victory 2-1 by topdecking the [card]Covenant of Blood[/card] I needed to win. However, my other two opponents I thoroughly stomped 2-0. Clearly, my round one opponent had the second best deck at the table (possibly even the best). He would have walked through my round two and round three opponents as quickly as I did. But because he was eliminated in round one, he never had a chance to really show his stuff. He had a good draft, but didn’t have the chance to prove it.

The Dark Side of Swiss

On the flip side of queues, Swiss events have a couple of notable disadvantages. First off, if your draft goes sideways or you open a bad pool, you’re stuck playing it for multiple rounds to try to salvage something. This can occasionally be disheartening, as your pool makes you fight to a 1-2 record for meager prizes. It can also have a significant swing in your win percentage if you track it. In single elimination, your worst possible record is 0-1. In Swiss, you can fall to all the way to 0-3.

The advantages of Swiss are also significant. In two games that average around 10 turns each, you’re only seeing just above half of the cards in your deck. You haven’t really seen what your deck is capable of. If you lost, you probably never pulled off a nut draw, saw how well you can top deck, or drew at least ten of the cards in your deck, much less saw them in play. I feel that three matches is really what is required to get a good feel for your deck and get you to start sideboarding well. For those of us being casually infinite, we need to learn as much as we can each time we sit down to play.

FNMs are run as Swiss for a reason. Most players came to play and winning is a potential part of that. Perhaps once I’m truly a master and can assure myself I can win 70-percent of my games, I’ll prefer single-elimination. But as a member of the casually infinite crowd, I prefer to actually sit down and play Magic. I want to get my three or more games out of my deck and I want to really suffer through the bad choices I made in deck construction. If I chose to run three [card]Invasive Species[/card] with no solid one- or two-drops, I probably won’t figure it out during match one, but by match three, I’ll be determined to never run them again without thinking really hard. 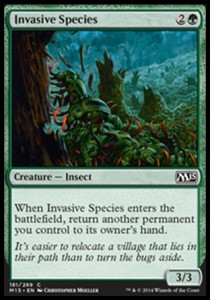 Where do you fall? Do you prefer single-elimination or Swiss events? Let me know in the comments.

@Masticon     -     Email     -     Articles Marc DeArmond is a currently a Middle School Math Teacher and the host of the Casually Infinite podcast. He started playing Magic back in Unlimited during 1993. His interests are trading up in value and playing limited on MTGO. He is the author of Casually Infinite, which discusses how to continue to play Magic Online without spending money. He is currently a Level 2 Magic Judge.
Previous Episode:
Weekend Magic: 8/29-8/31
Next Episode:
Conjured Currency #29: Oops.