Welcome back! No time for formalities—let’s get to the events:

For those of you who don’t know how the SCG Invitational works (and who might be confused as to why a Standard and Legacy deck could both win the tournament), please refer to this link for the specific details about the tournament.

The Invitational can be summed up as follows. According to Star City, the invitational happens four times per year and includes those players who are able to qualify for the event. You can qualify by getting in the Top 8 of an Open Series event or by getting in the Top 16 of the previous Invitational. You could also get first or second at an invitational qualifier (IQ), or become the SCG state champion of your state. Finally, you could also grind your way to a seat at this tournament by earning 15 Open Series points between Invitationals.

Once you receive an illustrious seat at an Invitational, you needed to prepare yourself for four rounds each of Standard and Legacy on Friday, four rounds each of Standard and Legacy on Saturday, and finally, if you made the Top 8, on Sunday you are invited to compete for the Invitational championship title by playing another four rounds of Legacy. Sounds like a mini pro tour to me, since it takes place across three days. There are $50,000 in prizes on the line and a large chunk of that goes to the top finishers. Pretty cool for an event that happens four times a year.

Tom “The Boss” Ross took down the Invitational again! My hat’s off to Tom, it was a win well deserved. He decided to play U/G Infect  again for Legacy (his choice that got him first at the previous Invitational back in June) and went with Rabble Red as his Standard option. I talked about Rabble Red a bit in last week’s article, so I’m going to focus on his Legacy deck choice of U/G Infect.

U/G Infect is an up-and-coming Legacy deck that I believe will become more popular over time, especially since Tom has taken down two Invitationals back to back using the deck over the past three months. I have been hearing a lot of good things about U/G Infect and it seems that it can go toe to toe with the likes of U/W/R Miracles, BUG Delver, and Sneak and Show, among other decks in the field. I think more people will start to realize the power this deck offers players in Legacy and I bet we will see much more it once we come to GP New Jersey.

[card]Berserk[/card] is the card, if any, that might experience a price bump based on these results. The rest of the cards have either spiked due to demand from other formats ([card]Noble Hierarch[/card]), are already Legacy staples ([card]Force of Will[/card], [card]Tropical Island[/card], etc.), or are commons and uncommons that aren’t going to explode in price any time soon. The deck plays only two [card]Berserk[/card]s, but the problem is that the only printing the card has seen since Unlimited is the FTV foiled version, which not many players favor. Regardless, I feel that if you want to play this deck, you will need Berserk in one way or another, so pick up your copies before they start climbing up. You can get HP-MP Unlimited Berserks for around $35 to $40 now, which I think is pretty good, especially since U/G Infect seems to be in the limelight every time we get to one of these SCG Invitationals. FTV copies aren’t too bad at $50 either. 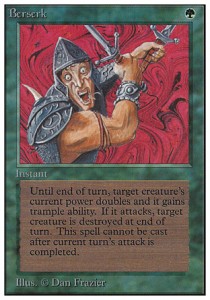 Keep in mind that Tom is an expert with this deck. He plays it in both Legacy and Modern, so in both formats he knows how to play the Infect game and play it as perfectly as he can. I imagine that this deck would be very hard for someone that is new to Infect to pilot to so many wins in tournaments. Clearly, the deck has power and will put up results for those who know how to pilot it. In the past I would consider the deck a pet deck, but Tom’s results could easily push it into an established Legacy archetype.

Moving on to the Standard Open at Somerset, we’re looking at more of the same from the previous week’s DC Open. Chris VanMeter won the Standard Open on the back of Jund Monsters. This deck differs slightly from Jund Walkers in that he opted to play [card]Domri Rade[/card] (backed with a bunch of creatures) and [card]Xenagos, the Reveler[/card] in favor of [card]Chandra, Pyromaster[/card] and [card]Nissa, Worldwaker[/card] that Michael Sammut used to secure a Top 8 finish in the same tournament. This version of Jund Monsters, however, did contain [card]Goblin Rabblemaster[/card], so it appears that the rabble rouser is able to help bolster the midrange decks in addition to Rabble Red and other aggro builds. Last week I commented on on how this card may not be able to reach $8 or more after rotation, but these results bolster the argument that Rabblemaster could do well for itself going into the future. Definitely something to keep an eye on as we go into September. [card]Mistcutter Hydra[/card] coming out of VanMeter’s board is something to take note of moving forward as well especially in lieu of Wedge colors.

Another cool deck was Mono-Black Aggro that placed seventh, piloted by Richard Nguyen. This list contained playsets of [card]Herald of Torment[/card], [card]Gnarled Scarhide[/card], [card]Spiteful Returned[/card], [card]Tormented Hero[/card], [card]Pain Seer[/card], and [card]Mogis’s Marauder[/card]. Pay close attention to this list, folks—this is probably what we’re going to see from mono-black moving into September after rotation. Apparently, [card]Boon of Erebos[/card] is a thing, too. Who knew? I expect we’ll see something very similar to this list once rotation hits. It looks like [card]Herald of Torment[/card] has the most to gain from being included in the deck. 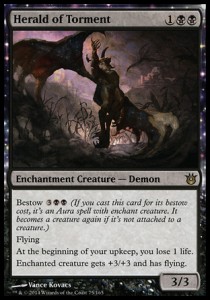 Speaking to Standard in general, the Onslaught fetch lands being spoiled for Khans means that [card]Courser of Kruphix[/card] is only going to get even better since it interacts so well with fetches. It already spiked Sunday night to $18 retail from the previous $12 due to the announcement, and I only see it continuing to maintain this price due to fetch land snyergy.

Next we have the Legacy Open at Somerset. Reid Duke couldn’t take down the Invitational with Miracles, but Dan Musser was able to fill Reid’s shoes and take down the Legacy Open piloting the deck. Second place went to Elves, piloted by Ross Merriam. I’ve been a fan of several pieces of the Elves deck for quite some time (it is the third most popular combo deck in Legacy behind Storm and Sneak and Show), and several pieces of the deck feel undervalued to me. [card]Glimpse of Nature[/card] and [card]Natural Order[/card] stand to gain the most from Elves doing well, and both are around $30 retail now. If you want to play Elves, I suggest you pick up these pieces before diving into anything else in the deck. [card]Gaea’s Cradle[/card] is pretty expensive and could spike from casual demand, yet I feel like it has stabilized for the time being. Not to say that it won’t spike again, especially if Elves continue to put up great results, however, I think that Glimpse and Order will experience the biggest percentage increases, since both cards have slowly gone up over time without seeing a huge overnight spike. [card]Heritage Druid[/card] is another good target since it was only printed once as an uncommon in Morningtide. $6 feels low for this girl to me. 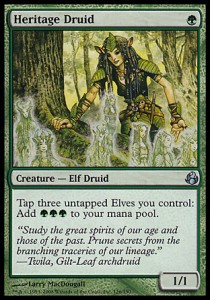 The remaining decks were mostly unique barring the Delver variants. Not much innovation in the lists except the random Koth in the Painter sideboard. Legacy seems to be as diverse as ever.

Plenty of cards were spoiled from Khans during the past weekend, and they will make their marks on Standard, with Sarkhan and the fetch lands being the most exciting. 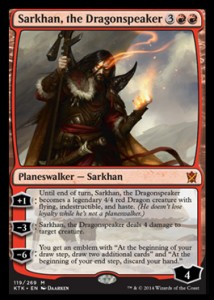 [card]Sarkhan, the Dragonspeaker[/card] is the red planeswalker that players have wanted for years. It offers you either a 4/4 red flying, indestructible, hasty dragon or a [card]Flametongue Kavu[/card] the first turn you play it. His ultimate also offers red something that Wizards has been trying to push: pseudo card advantage. Sure, you have to discard your hand every turn, but you are drawing two additional cards, which is insane for red. The downside even has interaction with delve, which is fantastic. But even better is that mono-red usually plays tons of cheap cards, so playing all of them in a turn is a real possibility. Suffice to say, I am excited for Sarkhan to make his impact on Standard.

Completing the cycle of tri-lands will also be good for mana bases. Pick up as many copies of these tri-lands as you can and hold onto them. They will always be worth at least $1 in trade due to casual demand. Going forward into the future, they only stand to gain value until Wizards decides to reprint them again. 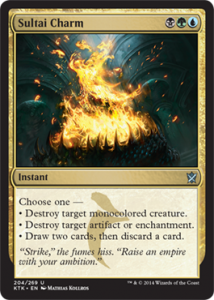 [card]Sultai Charm is juicy and I expect its charm brethren to be just as awesome. Pick up tons of these along the way as well. Just like the tri-lands, they will always maintain value due to casual demand and at least a few of them should see Standard play.

Sorin could be cool, though I don’t think he quite hit the mark this time. He seems so similar to another planeswalker I’ve seen in the past. Gideon? Elspeth? Hmm, I just don’t know. There will always be casual demand at least. 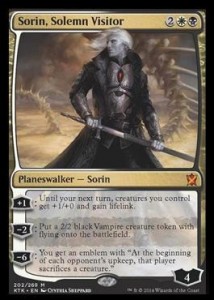 At first I thought Sidisi would be awesome for Legacy Dredge, but then I realized that you need to actually cast her before your self-milling can produce creatures for you. Maybe there is a fast way to reanimate her and then start dredging? Only the future will tell. In the meantime, she will make a fantastic commander alongside Narset. These two are the commanders that we’ve been anticipating since Wizards announced Khans would focus on wedges, and so far I am quite happy. They are exceptionally powerful Commander generals and I expect players to start brewing with them very soon.

Yet another exciting weekend in Magic! Star City Games threw a great series of tournaments in NJ and we got a ton of sneak previews of what Khans is going to offer. Spoiler season is under way and I can’t wait to see what the future holds for the new block.

Jared is a longtime Magic player who has been slinging cardboard since Odyssey block (back when creatures came into play). He was introduced to the financial side of Magic during Return to Ravnica block and hasn't looked back since. He is a resident of the VA area located just outside of DC. His favorite MTG formats include Limited, Legacy, and Commander. Regardless of format, he prefers making creature tokens. You can follow him on Twitter: @gildedgoblin.
Previous Episode:
Pitt Imps Podcast #84 Big Changes
Next Episode:
Casually Infinite – The Perils of Single Elimination