Most people who love Commander love it because you can play all sorts of wacky cards and sweet theme decks that you can’t play in Standard.  But unfortunately, sometimes this leads to huge board stalls where nobody wants to attack anybody and the game drags on for two hours or more.

To combat this, let’s go over my favorite eight cards to get the game moving toward a conclusion.  Personally, I find it a lot more fun to play four games in two hours rather than a single game in in that same amount of time.

Do you have your own favorite game-enders? Share them in the comments below! 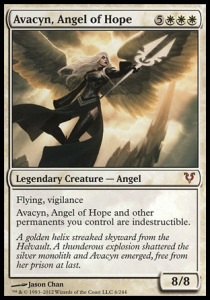 This is the only white card to make the list, because honestly, white doesn’t have a lot of good ways to end games. But boy, does it have a lot of ways to drag games out (I’m looking at you [card]Armageddon[/card], [card]Cataclysm[/card], and [card]Wrath of God[/card]).  Avacyn’s abilities make it very hard to kill your stuff and her stats force a conclusion to come sooner rather than later. 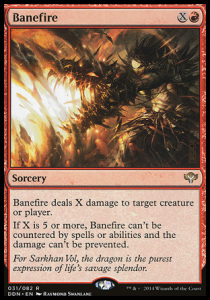 This card is mostly just a [card]Blaze[/card], but it’s uncounterability makes it the easiest to resolve and kill someone with.  There’s always a possibility that is gets [card]Redirect[/card]ed, but in that case, someone is still probably dying.  It doesn’t kill all of your opponents, which makes it much lower on the list than other cards. 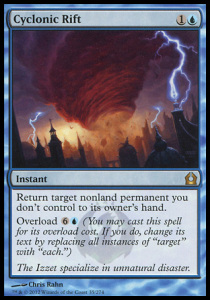 There have been almost too many games to count that I’ve ended with an end-step overloaded [card]Cyclonic Rift[/card] before my turn.  The card doesn’t outright kill anyone, but it should give you enough of a board lead to beat some players before another deadlock happens. 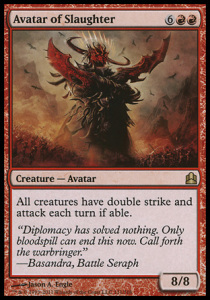 This card also doesn’t kill anyone outright.  But you know what it does do? Makes people attack and makes the game progress.  Without the ability to leave many creatures back on defense, it drives the game very quickly to a conclusion.  I recommend playing this in your second main phase so that you’re not the first one to make a move. 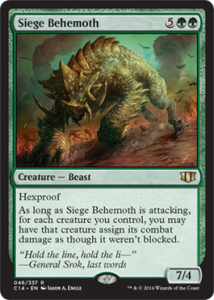 This guy is big, he’s bad, and he’s not getting blocked. And neither is the rest of your team.  [card]Siege Behemoth[/card]’s hexproof body and ability to push through damage can make almost any player mince meat. 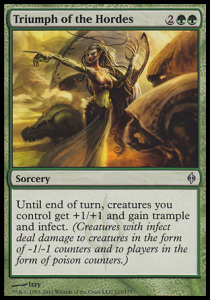 This card is one of the best win conditions against players gaining a ton of life or sitting behind multiplicative defenses like [card]Gisela, Blade of Goldnight[/card].  It’s also particularly effective in token strategies.  It’s not quite the best win condition available, because if you don’t do 10 or more poison damage to someone in one attack, it’s unlikely you will be able to do any more poison. 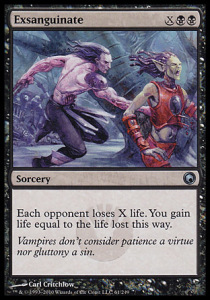 Bemoaned by many players in the EDH community, this is one of my favorite cards.  You know what it does?  It quickly kills a lot of people and makes it so the game doesn’t dragon… er, I mean, drag on.  With [card]Cabal Coffers[/card] and [card]Urborg, Tomb of Yawgmoth[/card], it’s not impossible to 40 everyone, but it’s likely when you can kill everyone the game has been going on too long anyway. 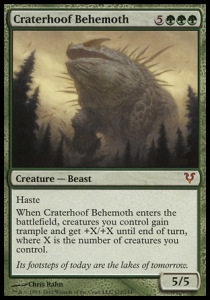 The big daddy of creature decks has got to be [card]Craterhoof Behemoth[/card]. It can be simply cast with a board of dudes and attack or turned into an intercontinental ballistic missile with [card]Tooth and Nail[/card] and [card]Avenger of Zendikar[/card].  The facts that it has haste, an enter the battlefield trigger, and isn’t subject to the “cast from hand” clause that a lot of similarly powerful creatures are, means this guy definitely takes the cake.

And eats it too.

Over your opponents’ bodies.

What are your favorite ways to end Commander games?

@Phrost_     -     Email     -     Articles Jim is a software developer and an avid blue planeswalker. He spellslings in Jacksonville, Florida, and you can feel free to contact him on Twitter at @phrost_.
Previous Episode:
Brainstorm Brewery Episode 139 – Dragons of Tarkir Set Review
Next Episode:
Pitt Imps Podcast #111 GP Cleveland

One comment on “Commander Spotlight: Eight Great Ways to End a Game of Commander”