First of all, I’d like to thank the people who commented on Organization Nation to share their organizational methods. It’s interesting to see how others sort and plan out their collections based on what their own needs and interests are.

So I was hoping that you guys would recognize that “Comms” is a terrible substitute for “Commons”, and… yeah, it was a bad pun. Let’s move on. I’ve talked in length about how I’m not a huge fan of set reviews, and I’m sure as hell not going to do a full set review for Khans of Tarkir. However, I realized that it’s been a little while since I’ve discussed the topic of picking bulk commons and uncommons for gems that you can trade off or buylist. I got my start in finance doing almost exclusively this for trade value, and I think it’s a nice Finance 101 topic to return to every now and then to help newer players or financiers establish a growing collection without a whole ton of additional effort on their parts.

Back in the day (well, about four years ago), I had basically zero disposable income to spend on expensive (read: more than $3) rares to put together a Standard deck for FNM. My trade binder was a pitiful husk of bulk rares and… actually, it was just bulk rares. I had a couple [card]Sunblast Angel[/card]s and [card]Dissipation Field[/card]s that nobody wanted, and I treasured my single [card]Elspeth Tirel[/card] like it was a gift from God, jumping up and down when I opened it during a draft. After several weeks of bored Spikes flipping through my binder, I became discouraged. I decided to start putting uncommons that I thought were good into my binder, to make it appear more “full,” and hopefully more desirable.

I ended up being pleasantly surprised when a fellow high-school student looking to build a Myr deck lit up upon seeing a few [card]Palladium Myr[/card] and [card]Myr Galvanizer[/card]. And he valued them at a whole $1 each? Golly me! I vaguely remember getting some number of elves off of him (probably [card]Elvish Archdruid[/card]s or [card]Ezuri, Renegade Leader[/card]s), and being shocked that uncommons could not only be desired by other players at events, but worth actual money. From that point on, I always tried to stay on the lookout for specific commons and uncommons in the new set. [card]Dismember[/card]s at $5 were a no-brainer to stick in your binder, but back then I was willing to throw practically any card I saw in a tournament deck into my crappy three-ring, rarity be damned. 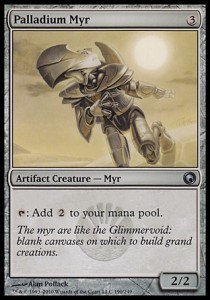 I bring up this long-lost fairy tale because Khans of Tarkir looks to be absolutely loaded with good common and uncommon picks for the future, even if you don’t plan on shipping out thousands of cards en masse to a buylist. Even though times have changed since 2011, there are still tons of players who care only about the rare (and potentially foil) slot in the pack, leaving the remains to rot on the draft table. Embrace your inner [card]Scavenging Ooze[/card] with me, and let’s look at some of these quarters and $1 bills that you can jam into your trade binder so that you can work your way towards that ridiculously priced $15 [card]Sylvan Caryatid[/card]!

[card]Jeskai Charm[/card] and friends: Throughout the entirety of the Return to Ravnica block, I pulled aside every single guild charm I found, organizing them all together. Over those two years, I sold or traded a ton of Azorius and Boros charms, some Selesnya, and even a few Orzhov and Dimir. I never got rid of any [card]Gruul Charm[/card]s, but I had them ready and waiting. These 5 will likely fluctuate based on which clan is favored in Standard, but I recommend making sure you treat these like $1 rares when you pull them out of packs or see them in binders, depending on the charm.

[card]War-Name Aspirant[/card]: I hope this Aspirant finds its war-name soon, because the current card name is just stupid. That aside, the power level is certainly there for this to see play in aggressive red/black/x strategies, so hoarding these doesn’t have much downside. Mardu players will raid your binders for them eventually.

[card]Murderous Cut[/card]: For as long as [card]Doom Blade[/card] and I were in Standard together, we had a mutually beneficial relationship where I would trade off playsets of it for $1 rares that I was speculating on. Delve Blade has zero restrictions of what it can [card]murder[/card] and has the potential to be cheaper to cast, even though the delve bit probably prevents this from being a four-of consistently. SCG sells them for $1, and there are players who use that for pricing. 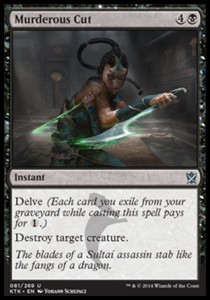 [card]Savage Punch[/card]: There is one guy (at least) in your tri-state area who wants to collect every copy of this in the world, foil or not. Try to get a few bulk rares in return and have them on hand, even if they’re not taking up space in your binder.

[card]Stubborn Denial[/card]: There are rumors at my school of this being played in Modern or even Legacy decklists with [card]Tarmogoyf[/card]. If you bought a box of Khans or have a weekly FNM draft, pull these aside and wait for a bite. Some players don’t have the patience to proxy things, they just want the cards now. Even if it ends up doing literally nothing in either format, the hype has a few weeks left in it.

[card]Monastery Swiftspear[/card]: If you paid attention to the Legacy Open from last weekend at all, then you paid more attention than I did to the Legacy Open last weekend. Good job, you’re doing better than I am at this stuff. Apparently, this card led the charge of a UR Delver decklist, and it put in some serious work when you can cast multiple spells per turn early on in the game. Because this one is more well-known already, you’re less likely to get them for free off of draft tables. However, when you do pick them up, you can ask for the $1.50 they are on SCG and see if you get any bites. 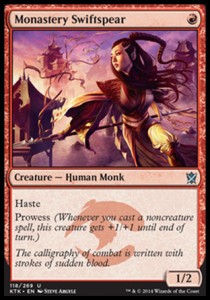 [card]Seeker of the Way[/card]: His brother Swiftspear managed to spearhead the Legacy Open, and this one sought the way to the top of the Standard Open in Jersey as a 3-of. ‘MURICANNNNNNNnn Tempo could very well be a consistent piece of the metagame moving forward (UWx generally is), and there are a lot of people who tend to copy the winning decks from the first weekend of the tournament (at least in my local experience).

[card]Treasure Cruise[/card]: Based on the fact that [card]Glittering Wish[/card] is now a $15 card (for now), people are jumping on a hype cruise that [card]Jeskai Ascendancy[/card] is broken as all hell in Modern. The Sam Black list on SCG Premium played this as a three-of. Foils are a trap at $15, but set aside the ones you open in booster packs as an attempt to use as throw-ins or equalizers in close trades.

[card]Mystic Monastery[/card] and friends: These will not only be EDH all-stars like their Shards of Alara counterparts, but they’ll be players throughout Standard as well. The best part about these is that you can pick them up at rotation as well, and they’ll still hold a good amount of value.

[card]Despise[/card]: I highly doubt this card will see any competitive play whatsoever while [card]Thoughtseize[/card] is legal. To put things in perspective for you young-ins, [card]Despise[/card] didn’t see Standard play when this thing was in Standard: 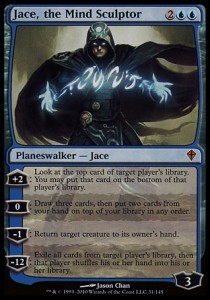 It won’t now. So why am I telling you to pull it out? Because people will want to try it. Have them on hand for when that happens.

[card]Raiders’ Spoils[/card]: People like building tribal decks, and this will probably be in them. Worst-case scenario is that you throw it back in with the rest of your bulk in three months if you don’t get any bites.

[card]Arc Lightning[/card]: Fringe-playable Standard-legal burn spell. Someone might need sideboard tech for the Open two months from now, and you can be that person’s hero by taking four seconds to pull this from your bulk that will be attracting dust in two months.

[card]Ride Down[/card]: I thought this was a rare when I first read it in the spoiler. Powerful effect that could very potentially see play in Standard aggro/tempo decks. 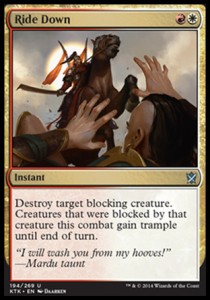 [card]Secret Plans[/card]: We all know that guy. Be the guy that helps that guy make his UG Morph deck as quickly as possible by having a playset of this thing in the back page of your binder, and grabbing a silly $2 rare that you can proceed to trade up from there.

As [card]Stoke the Flames[/card] has proven to us this past weekend, taking the time to pick out those “maybe it’s playable” non-rares out of the gutter can serve to be quite the boon to our collection values, even if you only had a couple copies. While I highly doubt that any cards from Khans of Tarkir will reach a $4 price point due to the high volume opened, it’s always nice being “that guy” who has any of the remotely playable commons and uncommons from the set. You don’t have to be the guy with playsets of foil fetches to get the attention of grinders who need cards.

Apologies if you read through this entire thing thinking either, “Duh, of course those are decent picks,” or, “You’re an absolute fool and this was a waste of my time.” When I was an aspiring Standard grinder, I found that picking every possible ounce of value out of my birthday booster box of Mirrodin Besieged was one of the best ways to begin the slow climb towards having a reasonable trade binder and collection. The first steps are always the hardest to climb, especially if you don’t have a huge cash spending budget up front.

As usual, I’d like to thank you for taking the time to read my ramblings, and offer the chance to start a friendly discussion or debate on this week’s topic. Are there any other picks that I might have missed out on or skipped over? Anything you think isn’t worth your time to pick out out that’s in this list? We saved you some room in the comment thread on Reddit, and 140 characters worth of blank space that needs to be filled up with questions on Twitter. Hope your Khans release has been going smoothly—see you next week!

@Rose0fthorns     -     Email     -     Articles Douglas Johnson is a 20-year-old MTG player who goes to college courtesy of a scholarship from Gamers Helping Gamers. He is currently found writing a weekly finance column at MTGprice.com, and you can always feel free to contact him on Twitter, Facebook, or Reddit.
Previous Episode:
Weekend Magic: 9/26-9/28
Next Episode:
Brainstorm Brewery #117 – Shout It Out