The professor walks in on the first day of classes with a gleaming smile that could make your stomach turn to knots. There’s no way someone can be that happy. It’s the first day of MTG Appreciation 2100 [Ed. note: this explains why he’s so happy]. As an introduction, Professor Brightflame feels we should take turns informing the class of our name and one fact about the kind of MTG player we are. The kid next to me pushes his glasses up his nose, takes a couple deep breaths, and stands up. After satisfying the itch in his well-knotted neckbeard he blurts, “My name’s Jani White and I love to gain life. Nothing better than a triple digit life total.” Brightflame gives a slight nod in my direction to inform me I was next to speak. “Sup, nerds! I’m the coolest ginger you know, Ginger Ale, and I hate Limited.” 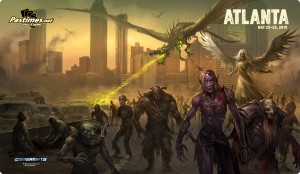 No, but really: I hate Limited grands prix. If by chance I could get shipped a decent Sealed pool in my direction, my first three or four rounds would be in my favor. I consider myself a slightly above-average player and feel I could outplay the first few opponents of an event, even if they have more card power than me (better rares or just more synergestic color combinations). By round five or so, I assume I’ll be battling that double mythic player and all the players in the right color combinations to slice through the competition with ease. How could I enjoy a format leaning so much on the power of a random pool plus the diabolical variance waiting in the wings to color screw you at the most inconvenient of times? Why put myself through the mental hype of taking down a grand prix? So when I signed up for Grand Prix Atlanta, I didn’t.

For fifty bucks I pick up a sexy [card]Batterskull[/card] promo, $15 side-event voucher, and six packs (my Sealed pool). Deal! Regardless of if I win, I was going to have a good time with friends, escape financial troubles for a weekend, and enjoy an environment dedicated to the game I love. No matter what, I would have a good time with a mediocre Sealed deck and play my hardest until my third loss is recorded. I wanted to learn something about the format every round, meet some new people, and test my ability to read players, decipher possible cards, and go for the win without scum bagging or sharking.

Everything was going to plan until I was passed this Sealed pool.

One Round at a Time

I’ll be the first to admit I was blessed with nothing short of what the denizens of Theros would label as “godly.” I had zero byes so I started round one hoping my mana base would be kind to me. Wanting double black or double white on turn three can make some opening hands harder to hold on to. My first round opponent was the type of MTG player I call, “The Readers.” If you can’t guess by the title, he had to read almost every card I played. Do I have a problem with reading every card? No, but your decisions should be slightly quicker to make up for that time loss. I kindly asked him in the middle of game two if he could speed up some of his plays since we had nineteen minutes on the round clock. He was ahead at that time but all I needed to swing things back in my favor was one of my four bombs hiding somewhere at the bottom of my library. The round resulted in a draw with my [card]Brimaz, King of Oreskos[/card] eventually leading the charge in game three only needing a few more turns to seal the deal. 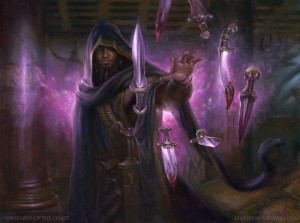 The next five rounds resulted in some tough games but eventually resulted in the wins I was striving for. Round six was against Swedish pro Rasmus Björklund. To sum the match up in one word, I’d choose “demolished.” If you could hand pick a G/W Heroic deck and play it against Rasmus’s concoction, it wouldn’t stand a chance. In game three I played a turn three Brimaz and felt behind.

I 2-0’d both rounds seven and eight to sit down for the ninth and final round. My first win-and-in! I blasted through game one with a turn-three Brimaz and a turn-five [card]Master of the Feasts[/card]. My opponent ended the game lacking the double white needed to cast his splashed [card]Elspeth, Sun’s Champion[/card]. Game two almost convinced me I could be dreaming.

I did it! I made day two of my second career grand prix! 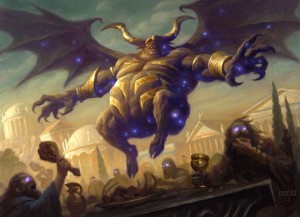 My work wasn’t over yet. After a much-needed meal, we made it back to the hotel rooms. My friends and teammates Cameron, Flynn, and Tim sat down with a stack of unopened Journey into Nyx prize packs to discuss pack-one-pick-one’s (we couldn’t buy Theros or Born of the Gods packs due to the vendor restrictions at Limited GP’s).

The overwhelming support from a friend wanting me to succeed would have brought me to tears if I wasn’t a man. *sniff* It’s a part of the community I have always heard about but never experienced. After meeting with your friends between rounds for win/loss updates, you always wish them good luck when the next round pairings are posted. What you probably haven’t experienced is when that support multiplies when someone from the group makes day two. Everyone was going to bat for me and wanted to do everything in their power to make sure I succeeded. No one was mad I made day two and they didn’t. No one wanted to party Saturday night to disregard my early morning schedule. Though many of them wanted to get up early and play Sunday tournaments anyway, I still felt like they would rather sacrifice their plans of extra fun to help increase my chances in a strong day two performance. The fact that a competitive one-on-one game breeds teamwork at par with cooperative games makes me so proud to be a part of this community.

So what about day two? 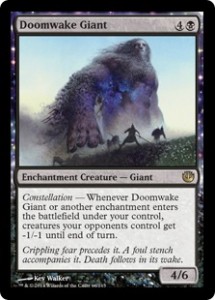 I sat down for my first timed draft somewhere around 9 a.m. without the level of nervousness I mentally prepared for the night before.

Journey into Nyx: Pick one was horrendous, forcing me to take the only playable in the pack, [card]Pharika’s Chosen[/card].  Pick three was [card]Doomwake Giant[/card] and a sign black had to be wide open.  Twelve of my pack=one picks were black playables, including [card]Grim Guardian[/card] so I expected the trend to continue.

Born of the Gods: That trend I was counting on fell off like the 2005 popped collar. There was only one playable black card in this pack. I found a few average white and blue playables, but not cards you ever want to take in the first half of a pack.

Theros: I knew I needed a bomb to pull me over to white or blue. This was a more realistic wish than a pile of black playables coming my direction.  A fourth- or fifth-pick [card]Spear of Heliod[/card] really helped my second color decision but I was still praying for one Gary ([card]Grey Merchant of Asphodel[/card]) to upgrade this pile from miserable to doable.

The draft ended with zero copies of Gary and an all-around stack of mediocrity. If I outplayed my opponents, a 2-1 record for draft one would be possible—and give me more joy that it ever should. Unfortunately, I lost every game three with each opponent under five life and a threat on the table. All I really wanted at the end of the first draft was a flash drive containing all my matches. It’s easy to say, “If I only had a better deck,” but my lack of experience may have blinded me to some possible lines of play or interactions.  You’re going to draft an average deck more often than a bomb-filled masterpiece or a heaping pile of poop.

I tried to keep my head up, but my second draft deck would land on the heaping pile of poop side of the scale.  A pile of R/G monsters with three pieces of removal wasn’t where I wanted to be. I knew 3-0’ing this draft was the only way I could place in Top 100.  My first opponent had a nasty sequence of the following: 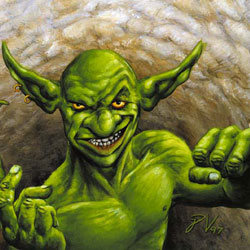 The man was a monster.  I actually dealt with the [card]Whip of Erebos[/card] my next turn but fell quickly to the power of [card]Spear of Heliod[/card].  I couldn’t play the waiting game due to the impact of any future enchantments he could draw.  Also, my pair of [card]Lightning Strike[/card]s couldn’t do a lot to the large-butted [card]Grim Guardian[/card]s.

I was out of contention to prize but I found no reason to quit.  My thought was that this could be my only day-two experience in my MTG career, so I figured I might as well go down with the ship.  I won the next match against a G/B flyers deck.  My final match was against the other red/green drafter.  Every creature I played in games one and two outmatched his until he dropped [card]Forgestoker Dragon[/card]. That single-handedly won him both matches.  A large amount of playful banter was exchanged throughout the match resulting in a good end the day.

I joined my friends at their side events. Tim Rivera was undefeated in the Super Sunday Series going into the sixth or seventh round while my buddy Ed Rickman suggested to his finals opponent of a side event draft (that just scouted Ed’s semifinals match) he would split the packs if he gets the Grand Prix Atlanta playmat.

We now call this tactic flexing your deck.

With the grand prix winding down, we all piled in for a quick trip back to Murfreesboro, Tennessee, filled with stories of crazy board states, winning top decks, and the lack of green in our wallets.  I wouldn’t trade these experiences for anything, except for maybe paying off my student loans.

@TNSGingerAle     -     Email     -     Articles Houston is the host and creator of Tap N Sac Podcast. He enjoys any format with a healthy community. He usually taps Mountains to have fun and taps Islands to win.
Previous Episode:
Forced Fruition Episode 12: Tribal Cube Angels
Next Episode:
The Spike Feed 41 – Pillaging Merfolk