I love Modern because of all the value.

Even though Modern is a format where everything is subject to reprint, in addition to the likely release of more Modern Masters sets, the prices of staples are still low. In the year 2013, [card]Splinter Twin[/card] doubled in the U.S. shortly after doubling in Europe; [card]Chord of Calling[/card], [card]Fulminator Mage[/card], and [card]Horizon Canopy[/card] all more than doubled due not being reprinted; and novel new competitors like [card]Disrupting Shoal[/card] quintupled overnight.

Even fringe cards like [card]Threads of Disloyalty[/card] and [card]Restore Balance[/card] saw a bump just because it’s Modern and it’ll see more and more players as the format becomes more popular. [card]Threads of Disloyalty[/card] jumped 50% just because it was seeing play in two tier-one decks, and [card]Restore Balance[/card] is up 200% since six months ago, even though it sees close to zero competitive play outside of popping up in dailies every now and then.

For Magic financiers, it’s a good idea to play Modern, just like it is to play EDH, another eternal format that has a lot of room for speculation. The value proposition for playing the format is there. If a card has already been hit by a reprint in Modern Masters, you can only expect the value to go up from here. While Legacy has more stability, Modern has more spikes in value due to price corrections. Staying up to date about the Modern meta-game will give you a huge leg up to get to the spikes before the news goes around.

Modern tournaments are also heating up. Grand Prix Antswerp marked the biggest Modern Grand Prix to date with 1601 players, a respectable number even compared to other formats. Being that Modern is an eternal format with cards that don’t rotate, we can only expect the growth rate to accelerate going forward. As players jump on the bandwagon, more and more players will want in on the ride. And unlike Legacy, Modern is a pro tour format, which means that even if Star City Games can ignore the format for the time being, it can’t ignore it forever.

Being that we’re getting closer to banned list announcements, I thought I’d take a minute to talk about the topic. It seems to always create controversy no matter what circle I’m in. Wizards of the Coast has more or less consistently banned/unbanned a card in Modern every six months or so, and we’re due for another change in the format.

Originally, I intended to list all the cards that will stay on the banned list no matter what, but the list is so long that it would likely take up the whole article. The banned list is unnecessarily long so that Modern would be protected as a new format, but that gives it space for cards to be unbanned (see [card]Valakut, the Molten Pinnacle[/card]). Let’s talk about other cards that can (and should?) be unbanned. 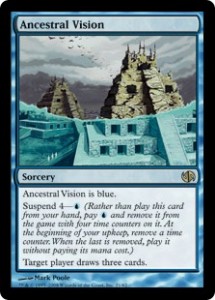 Modern doesn’t have any good cascade cards now that [card]Bloodbraid Elf[/card] is banned. The [card]Shardless Agent[/card] following a [card]Brainstorm[/card] into [card]Ancestral Vision[/card] wombo combo doesn’t exist in Modern. Control in Modern is severely lacking, and UWR Control is currently on its knees due to having bad matchups against all of the tier-one Modern decks except Affinity. Recently, UWR has turned into more of a midrange deck. It runs a variety of creatures because there aren’t enough good cards to make a pure control strategy viable. [card]Ancestral Vision[/card] may be a powerful card, but it doesn’t win the game on its own and it tends to be a dead draw later in the game. It’s also quite slow, because that the earliest it can go off is turn five, while Modern is a turn-four format. 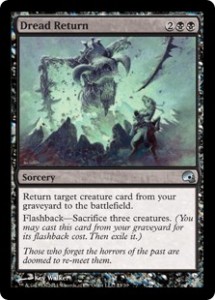 Call me crazy, but I can see the argument for [card]Dread Return[/card] being unbanned to really shake up the format. Dredge is non-existent in Modern, in part because [card]Deathrite Shaman[/card] is one of the most-played creatures in the format. Three creatures is a lot to sacrifice, and without [card]Narcomoeba[/card] and [card]Bridge from Below[/card], it’s just not happening on a regular basis. I would love to see more variety in Modern, even if it means playing against broken decks. 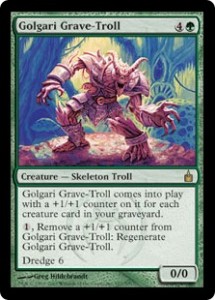 Speaking of Dredge, why not unban the best Dredge creature? While [card]Dread Return[/card] would be a risky unban since it enables more trippy plays, [card]Golgari Grave-Troll[/card] is the safer unban because it’s just an upgrade over the Dredge 5 alternative [card]Stinkweed Imp[/card]. I don’t see this and [card]Dread Return[/card] being unbanned at the same time, but rather one or the other. Because graveyard hate is readily available in Modern now that [card]Rest in Peace[/card], [card]Deathrite Shaman[/card], and [card]Scavenging Ooze[/card] have been introduced to the format, there are plenty of cards to keep graveyard strategies in check. 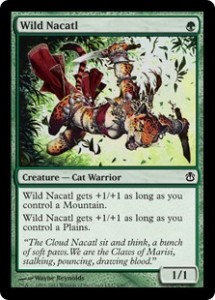 The card that I’m most stoked about the possibility of being unbanned is [card]Wild Nacatl[/card]. It would introduce a Naya Zoo archetype into Modern, an exciting alternative to the only other existing aggro deck in Modern, Affinity. [card]Wild Nacatl[/card] is a card that is strong but not broken, because like all fair creatures, it dies to [card]Lightning Bolt[/card]. The reason that it’s on the banned list is because it limits variety in aggro decks, but being that aggro in Modern is as limited as it already is, I don’t see the reason for it to stay on the banned list. 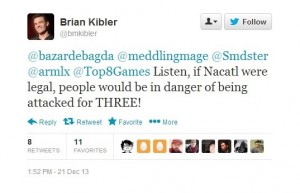 So says the man who shook up MTGO and nearly caused an apocalypse. Could this be another shift of public opinion in the making? Love or hate the guy, apparently Brian Kibler’s opinions are the only ones that matter in the realm of Magic: The Gathering. 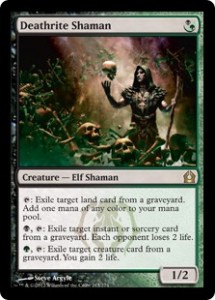 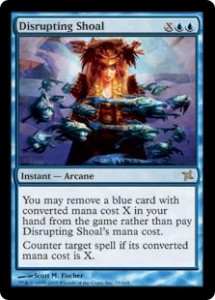 While the hype has died down on [card]Disrupting Shoal[/card], the TCGplayer mid price has stayed at $10.30 despite having zero copies in Day 2 of GP Prague. What gives?

Simply put, the Mono-Blue Ninja Bear deck is a fun deck. Here is a decklist in case you’ve missed it.

How good? I think that after playtesting it for a week, I think it would be fair to say that it has the potential to be a tier-1.5 deck with more tweaking, including a splash for Red.

What about [card]Disrupting Shoal[/card]? I don’t think it’s anywhere near the power of [card]Force of Will[/card] because it’s easier to play around, but it does have a place in Modern where a simple play like turn-one [card]Deathrite Shaman[/card] or turn-one [card]Expedition Map[/card] can determine the course of a game. In a format where going first is a huge deal, [card]Disrupting Shoal[/card] helps to offset the balance of the tempo gained by going first versus the card advantage by going second. If you’re still holding onto the card, I would advise you try to trade it away, but nevertheless, it’s a fun card to play.

I personally still think that the UR Delver deck that Jeff Hoogland popularized is better than the mono-blue version because it plays [card]Lightning Bolt[/card], the best card in Modern, as opposed to [card]Vapor Snag[/card], a temporary solution to permanent problems. [card]Spellstutter Sprite[/card] has really proven itself to be one of the premier cards in Modern due to its versatility in playing defensive as a control card and aggro as a threat on the table. While all the UR Delver decks that Day 2’d GP Prague were of the [card]Young Pyromancer[/card] variety, I believe that the [card]Spellstutter Sprite[/card] style has the most consistency because of the ability to counter most spells and also flash in threats.

For more talk about Modern, you can follow me on Twitter @fyawm or the MTGFinance subreddit where I post under the same name. Until then, please feel free to discuss the contents of this article in the comments below or on Reddit!

@fyawm     -     Email     -     Articles Tim Enmou Gao is a writer for Brainstorm Brewery and resides in Los Angeles. A Modern-phile at heart, he is currently piloting a RUG Delver. You can reach Tim on Twitter or /u/fyawm on Reddit.
Previous Episode:
The Financial Five: Multicolored Devotion
Next Episode:
Standard Commander: Mono-Colored Analysis