So last week’s article happened. The feedback that I got was mostly reticent confusion, which is how I imagine most test audiences walked out of advance screenings of Donnie Darko. Let’s address the problems with last week’s article:

I think these problems arose partially because it was not a fully explored idea when I began and partially because I’m still getting my sea legs as a writer. So let’s synthesize all of my data since last we met:

BRIEF REFLECTIVE ASIDE: Now, I’m lucky—I registered for this site essentially on a lark, I’m not counting on it for an income. If I was starting a new store, and I wanted to be active on TCGplayer without massively undercutting my first X sales to get past Level 1, I’d be dying a death. The influx of “civilian vendors” (sellers on TCGplayer that aren’t also brick-and-mortar shops, just like me) means that you have to undercut a LOT of people to get established, and many of those people have much less overhead to manage. If you’re a store, your margins are immediately worse than a civilian dealer, because each month you are also paying for AT LEAST rent, liability and property insurance (assuming you have no other employees), and utilities. I know a lot of stores that use TCGplayer as a means of selling cards. I also know that some of those stores that played the “Race to the Bottom” game died a slow death.

My goal for this next week is to make it out of Level 1. However, I don’t think that having a few random foreign cards listed is going to do the trick. In order to make this work, my plan is to list some Constructed (mostly Standard and Modern) staples, and see how low I have to go to get them to move (I’ll factor in fees to show what I really got at the end of the day for them, and we will compare that to buylist prices and other “civilian” outs). My hypothesis is that I am going to take a loss, but that the expected “gain” is moving up a level or two on TCGplayer (whether that is worth my time, energy, and ultimately my [potential] money is yet to be seen).

I can’t imagine being a new store trying to get established on TCGplayer.

Basically, just know that this is going to be something that we occasionally check in on, but likely won’t be the singular focus of another article. I hope the above also cleared up some of the confusion about last week.

Speaking of things that happened last week, I got eleventh place (7-2, missed top eight on breakers) in that 5K I mentioned! Big congrats go to friend of the program and Floridian end-boss John Cuvelier on taking down the whole thing with Mardu. Let me show you the sweet list I played:

This is largely a stock Abzan Aggro list. However, the formerly headlining [card]Wingmate Roc[/card] has been replaced with [card]Whisperwood Elemental[/card]. My earlier lists featured both (three Rocs, two Elementals), but I noticed that I wanted to draw more Whisperwoods, and eventually made the bold move of cutting Roc entirely—which coincided neatly with the rise of [card]Stormbreath Dragon[/card]. Playing 26 lands was a last minute maneuver that I’m ultimately glad I made. Even though I drew more lands than I wanted, I also manifested a bunch of them, and that feels like the greatest thing in the world.

The sideboard may ultimately change, I think I want the two Hordechiefs to become a third [card]Back to Nature[/card] and a [card]Pharika’s Cure[/card] (I also think I want to shave the 26th land for a Cure in the main, at least for FNMs).

I won’t do the whole tournament report run-down, but I will do an abbreviated Quick Hits type segment on the deck and this particular event.

BRIEF JEDI MIND TRICK ASIDE: I don’t know if newer players know as many Jedi Mind Tricks as us old-timers, but a good defensive one is being able to just clear your mind in a match. If you can seriously wipe away all of the extraneous information, it will keep your brain (which is like a computer) from overheating. Conversely, if you fashion yourself as a Sith lord, you can attempt to overwhelm your opponent with extraneous information, to make them overload (but you will get Dark Force points).

The Truth About Modern Masters 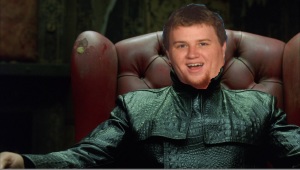 Do you know how Magic distribution works? Don’t worry, it’s hard to if you don’t work with a store or haven’t been around for a very long time. The vast majority of stores only get a small percentage of their product directly from Wizards of the Coast. WOTC has too much else going on to worry about getting checks on time from smaller operations. Instead, large wholesale distributors buy from Wizards and then allocate and sell product to game stores (they also deal with sleeves, sports cards, different card games, and all that other stuff). Now, here is where things get sticky.

Once the product gets purchased by the distributors from Wizards, it is out of WOTC’s control. Wizards, as you may or may not be aware, also hosts distributor meetings and showcases a few times a year, to get the distributors excited about upcoming releases (and hopefully inspire them to buy more!).

Without revealing my sources (journalistic integrity!), I can tell you that every one of those distributors has cases of Modern Masters in their rafters. The set wasn’t under-printed (well, at least not as much as we thought), it just never made it past the middle man.

A part of this is normal. Distributors own the product, and so they will often set some aside to have down the line, or will buy unopened product back from stores that are closing. One of the things that is happening with Modern Masters specifically is using it as a honeypot to move unpopular products. Things like Core Set precons, which typically just gather dust, get a discount rate on Modern Masters (or even just the opportunity to buy more!) tacked on as an incentive. Something along the lines of, “Hey, store owner, if you buy six cases of these M15 Intro Decks, I’ll sell you a case of Modern Masters for $900!” This allows the distributor to not only move low-interest products, but also recoup back what they paid for the Modern Masters product as well as the sunk cost of not moving it before!

There was a sentiment expressed that if Modern Masters 2015 features many of the same ringers as the first series (distributors who attend WOTC’s showcases sign very explicit and strict non-disclosure agreements, so no, I don’t know the immediate future of [card]Tarmogoyf[/card]), then the distributors may not know what to do with all of their excess Modern Masters. I expect that it would suddenly start appearing more frequently on store shelves, which would likely do little to the prices of mythics and chase rares, but lower the value of the key uncommons.

Two of the changes to Modern Masters 2015, the increased MSRP and higher printing, are actually checks against distributor hording. The higher MSRP reflects a higher wholesaler cost to purchase, which will be harder to ignore up front. The increased supply as well will cause more of it to be sold up front to offset those higher up-front costs, even if some amount of it does end up in the midst of a warehouse a la Raiders of the Lost Ark.

At the End of Your Turn…

Until next week, when we will discuss my totally real preview card.

One last sneaky finance tip for those of you who made it this far—foil copies of [card]Plasm Capture[/card] seem like they should at least cost more than the terrible packs they come out of. Just sayin’.

2 comments on Privileged Perspective 17 – Last Week and the Future