Privileged Position 5: No Sleep ‘Til Edison

Last weekend was Grand Prix New Jersey, the third-largest GP (or any tournament, really) of all time. I had a great time, but more than anything else, the past couple of days were a glimpse into what is likely the future of Magic’s organized play program.

The official attendance for this tournament was 4003, but that number is a little bit disingenuous, at least in terms of explaining how the weekend went. That count does not include vendors, judges, floor traders, side-event participants1, security personnel, etc. The venue, especially on Friday and Saturday, felt packed. I think a lot of people got a different impression of the final number because they compared it to SCG’s publicly announced cap of 6500 attendees (as if 4000 could be small somehow), but in no possible sense was this a loss for them.

I think the biggest question we have to ask is: was this a successful Magic tournament? Obviously we know what BBD’s answer would be, and SCG’s as well, but was this representative of the GP system? Someone2 recently mentioned that GP weekends are starting to resemble conventions, rather than pro-level tournaments, and this weekend certainly made that statement more apparent as well. So my question is: if it was a Magic Convention, what would have actually been different? If the main event did not award Pro Points or PT invites (but maybe offset that by paying out more cash), how many people would that have really turned away? The closest analog would likely be Eternal Weekend or the European Bazaar of Moxen (named presumably for my cat, Mox Kitten). Eternal Weekend didn’t attract 4003 players, but it also was not run by Star City Games, which has been plugging #GPNJ for the past several months.

Okay, so it turns out that everyone is writing about this, and you’re probably sick of it by now. As a means of compensation, please accept this excellent Strong Bad Email

Of course, the main event is the crucial axis that the financial aspect relies on for weekends like this. Cards like [card]Chalice of the Void[/card] were in heavy demand all day Friday and into Saturday morning, and [card]Containment Priest[/card] was selling for the price of two Commander decks! I won’t credit myself as getting that called shot correct (who are we kidding, of course I will), but I think there is a trend starting to emerge—when there’s a Legacy-playable option in a Commander release that goes on sale the week before a big Legacy event, bring lots of copies. These decks are already more plentiful than last year’s offering, so I don’t expect that price to stay high long term, but this definitely shows the pressure a deck registration deadline can put on a Legacy singles market.

Have you seen the prices of Power this week? Probably not, since they’re so high. They’re so high, you’d need a telescope to price them, since they are likely breaking through the ionosphere right now. They’re so high, Tal Bachman wrote a hit song about them. Their prices are getting so high, Lindsey Lohan tried snorting a Mox Ruby.

Those terrible jokes are right, though: these prices are getting out of hand. You can now trade a NM Alpha Lotus for a NM Hyundai Elantra. Of course, there are very few mobile pieces of near-mint Power left in the world, if any. The best ones have already been graded, and graded Power has always had a higher market price. Power also doesn’t change hands very often, especially pieces that have been personalized or are too played to attract an interested buyer. Star City is saying they didn’t aggressively target Power over the weekend, but at least a few floor traders are saying they were. The SCG buy prices changed almost immediately after the weekend was over, though, and there doesn’t seem to be any other possible reason why.

If you have plans of ever owning Power, start getting it soon. There are a couple of things to be aware of when acquiring Power, so let’s touch on them here:

Even though the prices on Power are the only things to have gone up significantly so far this week, I would expect things like Library of Alexandria and Time Vault to go up soon as well. If you have ever wanted something from the first few Magic sets, you may want to start working towards it now.

Cheers: SCG. Even though there were some logistical issues throughout the course of the weekend, I am confident that any other TO would have done a much worse job. Also, Ben was seriously on top of stuff this weekend, including indirectly helping me get to the event on time Saturday!

Jeers: My deck. You should be guaranteed a feature match and day two if you play above a certain percentage of sweet foils, regardless of what the deck actually does (or in my case, doesn’t do).

Cheers: Legacy. Despite everyone saying that Treasure Cruise, Monastery Swiftspear, and Dig Through Time ruined the format, they were proven wrong. The format is still rich, diverse, and impossible to predict. I didn’t play against UR Delver once this past weekend!

Jeers: Legacy. This format is rich, diverse, and impossible to predict. I showed up ready to crush UR Delver and didn’t play against it once. Instead, I got crushed by Food Chain and turn two’d by Through The Breach. Go home, Legacy, you’re drunk.

Cheers: The high-end vendors. There was a lot of cool stuff at the vendor booths this weekend (not to mention literal Cool Stuff, the store). I saw a test print City of Brass, which I didn’t realize existed, as well as a textless foil Lightning Bolt (picture below). There was allegedly a Summer Sol Ring and Bayou, as well as some other fascinating obscurities, along with quite a lot of Power. 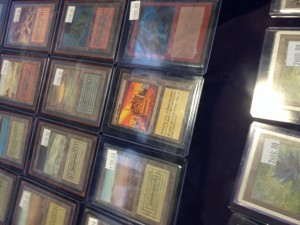 Jeers: SCG. I’m not sure if this is just a Star City policy, or if it extends to other Tournament Organizers, but there were hardly any packs for sale at vendor booths. One vendor told me it is because SCG sells current Standard packs, and so they tell other vendors not to bring them as a condition for buying booth space. Another told me it is to prevent people from buying packs and going to the hotel bar to draft, rather than signing up for a side event. I’m leaning more towards the first, since if that was SCG’s modus operandi, then they wouldn’t be slinging packs either. Anyways, it was hard to find sufficient packs for wacky draft, and that is a shame. I WANT MORE WACKY DRAFTING. WHY ISNT THERE A WACKY DRAFT PRO TOUR?

Cheers: The building the tournament was in. It was almost like it was built specifically for Magic events. VIP lounge was nice, even though the somelier’s recommendation of the malbec with the duck confit was a bit pedestrian. The free box of Arturo Fuentes with our VIP Modern Masters draft was a nice touch though. Oh wait, we were instructed not to tell the proles about the super secret VIP perks. Sorry. :(

Jeers: Everything outside the building in a roughly three-mile radius, the state of New Jersey. Turns out, the convention center was in the middle of an industrial park. No convenient access by train, bus, or subway. There were also no restaurants within walking distance, and if you elected to stay at one of the cheaper hotels, renting a car was a necessity.

I know it’s common for people to crap on New Jersey. The roads are confusing and full of crazy people. They think “Thunder Road” is the magnum opus of western composition. Garden State was a terrible movie. And thanks to semi-recent political shenanigans, they are constantly being shit-talked by Wesley Crusher look-alike Rachel Maddow. But don’t worry, New Jerseyians (Jerseites? Jersuits? Jersey Boys?). I just want you all to know, deep down in your heart of hearts, that it’s all absolutely true.

Sorry for the short article this week, but due to travel and catching up on work, I didn’t have the time needed to write this article and fully put off writing this article. Come back next week, when I talk about building and growing your network. Until then, keep standing on the overpass screaming at the cars you want to get better.

1 I played a couple Modern events, and I don’t think any of my opponents actually played in the main event.

2 I honestly spent the better part of an hour trying to find out who. I want to say it was Matt Sperling. Anyways, I really wanted to link you the article, so if you find it, please post the link in the comments and we will tack it on somehow.

3 By American standards. Apparently the Japanese are on a whole other level when it comes to this kind of thing.

I've been gaming MtG finance since artifacts were brown. Longtime magic player and TO. Loving husband and father. Cube > Commander.
Previous Episode:
Brainstorm Brewery #123 – Unpronouncable
Next Episode:
Welcome to the Jungle: Sideboarding versus Midrange and Control

One comment on “Privileged Position 5: No Sleep ‘Til Edison”