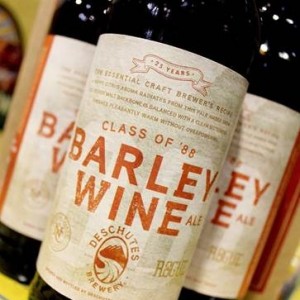 This week, we are going to be talking about the beeriest of all beers. The beer that takes the beer flavors you know and love and makes them larger than life. This week, we are talking about barley wine! The two examples I have of this style on my cellar-shelf at the moment are called Burleywine, by my local micro-brewery, and Thor’s Hammer, by Central City Brewing. You will more often than not find a barley wine with an epic name, because that’s just what the beer is: epic.

Barley wine is one of my favorite beers to bring to gatherings where the people who are in attendance are new to drinking good beer. This is happening more often, which is awesome, because of all the popularity that craft beer is gaining right now. Also, as soon as someone finds out I make beer, they ask me about the process. I’ve gotten my monologue of grain to glass in down to five minutes. After that, people just want to know what the beer I drink tastes like. They seem to have figured out that no one could be so passionate about yellow fizzy water, and so there must be something more to it.

Barley wine must be one of the “beeriest” tasting beers you can get. This is obviously debatable, but I would argue that the flavor of a well-balanced barley wine is almost a caricature of beer. There are simply more beer ingredients per gallon of water than any other classically produced beer (more on this in a bit).  A weak barley wine will weigh in at around eight percent ABV. A stronger example of the style could reside around 13 percent or more. It makes sense that this beer would really taste like beer. Let’s take a look at an edit of the tasting notes from an American barley wine.

Flavor: Strong, intense malt flavor with noticeable bitterness. Hop bitterness may range from moderately strong to aggressive. While strongly malty, the balance should always seem bitter. Moderate to high hop flavor (any variety). Low to moderate fruity esters. May have some bready or caramelly malt flavors, but these should not be high. Roasted or burnt malt flavors are inappropriate.

When I say caricature, I mean to say that all of the signature flavors of beer are accentuated in the same way a cartoonist would accentuate Jay Leno’s giant square chin. In the flavor portion of the BJCP tasting notes, we notice that the two main flavoring ingredients of beer (malt and hops) need to be strong, intense, and aggressive. It needs to be strongly malty but balanced toward bitterness. Any extra-fruity flavors from the esters or extra-malt flavors such as roast or burnt are simply called inappropriate. What I understand when I read these notes is, “We want to taste the ingredients used to make beer and nothing else!”

The way the brewers achieve these qualities is by using more of the ingredients. Ray Daniels, the author of the book Designing Great Beers has this to say about the making of Barley Wines:

“The making of barley wine often turns into an exercise in logistics. Grain brewers will find the limits of their systems severely challenged if they try to produce a full-sized batch of barley wine. In general everything will be bigger than you expect…”

To give some perspective on the amount of grain used to make one, any beer at 4.5 to five percent ABV will have around six pounds of grain per five gallons (the size of a home-brew batch)  This is just under a pound per gallon. A barley wine around 12 percent will have around 22 pounds of grain per five-pound batch. That is just over four pounds per gallon. That is a crazy amount of grain!

A Bit of History

The earliest development of the style is thought to come from the aristocratic houses of England. It was brewed for these houses first because to making it on a commercial scale at that point in England was not feasible.   Because England is not one of the great wine producers of the world, their supply was not always as reliable as might be desired. It was then used a a sort of back up and it would often age in barrels for an entire year before it made its way to the table. Their version of barley wine, which was described to have vinous nature, was brewed when supply of wine was short and there was a need for something to stand in its place at the table.

The first recorded barley wine was commercially produced in Burton upon Trent by Bass Ale. It was called No.1 Barley Wine. It was in both London and Burton where “strong ales” were mostly produced. The difference between the two of them came in part because of the water profile difference between the two cities. Burton on Trent is famous in the beer world because of mineral profile of its water. It has a naturally high carbonate and sodium chloride content which lends itself to sweeter, maltier beers. The London water had a lower content of these minerals and so the beers ended up having more of a hop character to them. It may not be a surprise to find out that London beers were indeed hopped more aggressively and heavily dry hopped. The Burton version of the beer would have little to no dry hopping. 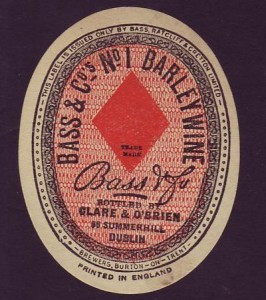 It was eventually Bass from Burton that coined the term barleywine and thus set a real starting point for the style. It’s popularity has waxed and waned over the years. Rationing due to the wars and pressures from prohibition pushed the alcohol percentage lower and lower until it was no longer a barley wine. In the US, Anchor Steam picked up the style with Old Foghorn as well as Sierra Nevada with Big Foot. With the advent of the craft beer movement, and even more with the trend of extreme beers, the barley wine style is as healthy and popular as ever. It is often the defacto Christmas beer or specialty beer that a brewery will make in honor of an anniversary or some special occasion.

One reason for its celebratory status is that this is one of the few beers that can be aged for a few years and gain character rather than lose it. In fact, breweries that release a yearly barley wine will often label it with its vintage the same way a winery does. I do recommend that when you are picking up a barley wine to pick up as many bottles as you can justify. I have four beers of a six pack left of the barrel aged Burley Wine made by Half Pints, the one microbrewery in Winnipeg, from 2012. I had one a few months after getting it for Christmas with a friend. The flavor almost literally knocked me off my chair. It was so strong tasting I couldn’t believe it! I then had one a full year later and it had mellowed considerably and was far more enjoyable. I promise when I crack the next one I’ll let you all know how it is.

Barley wine… of course! I don’t need to expound on it virtues any more. You can find the full BJCP tasting notes here. As always, try to find a local version first. If you can’t find on of those you should be able to find Fog Horn by Steam Anchor or Big Foot by Sierra Nevada.