What’s up, brewers? Welcome back. Today we are going to talk about Legacy, and since I don’t know very much about Legacy, I decided to take the opportunity to talk to someone who does. This article will feature an interview of my good friend, Mr. Thomas Herzog. Tom is known locally as being an awesome Magic player. And he really proved that when there was a Legacy Open in his backyard. That’s right, Tom skipped out on spending Easter with his family to demolish the competition (the same one where I had a rather mediocre finish in Standard the day before). 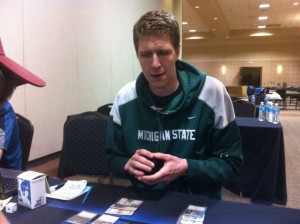 This is a rather cool article for me to write because Tom got me back into competitive magic. He always wanted to test every format and it was fun to test with someone who was so good. His help pushed me to be the better player I am today and it’s always good to see someone who puts in the work succeed. Tom is no stranger to competition. Back in college, he used to play on the Michigan State basketball team, which is cool if you follow the second best school in Michigan for sporting events (for those of you from out of state, U of M would be the first).

Tom took his trusty Maverick deck, and even though some people think the deck is dead, Tom was able to place fourth, losing to RUG delver, the deck he was able to beat in his quarterfinals match. Maverick is a green-white good stuff deck, where you play a lot of reactive and proactive creatures. [card]Mother of Runes[/card] can shut down removal. [card]Thalia, Guardian of Thraben[/card] is key to stopping the combo decks. [card]Qasali Pridemage[/card] is very effective at destroying [card]Batterskull[/card] and [card]Umezawa’s Jitte[/card]. And [card]Knight of the Reliquary[/card] can quickly make your opponents dead.

Today I was able to sit down with Tom and ask him some questions about his deck, as well as some of the hard-hitting questions that everyone wants to know. Let’s go.

Tom you appear to be slightly taller than the average person. How tall are you?

Do people assume you play basketball because you’re so tall?

Yeah, all the time. They say, “You’re tall; do you play basketball?” My response has become, “You’re short; do you play mini golf?”

Did they play minigolf?

Anyways…what deck list did you settle on for the event?

*4 Knight of the Reliquary

*1 Sword of Fire and Ice

With Legacy so full of fun and interesting decks, why did you settle for this one?

Maverick really fits my play style. I really like to play a sort of aggro-control deck. You generally have a good matchup against any deck that combos off on turn one. The deck has solid mana and a brutally efficient curve. I like a deck without [card]Brainstorm[/card]s and counter magic. You can play hate bears to fill [the disruption] role, and hate bears attack.

What are Maverick’s best matchups?

Maverick is a very versatile deck. Because you play a lot of creatures with abilities, you can tune those creatures for whatever expected meta you think will be at any given tournament. Expect a lot of combo? Be ready with [card]Gaddock Teeg[/card] and [card]Ethersworn Canonist[/card]. Playing against creature decks? You have larger creatures and [card]Swords to Plowshares[/card].

Generally, any fair deck is a fairly good matchup. You have a lot of graveyard interaction. You have creature removal. You have [card]Mother of Runes[/card] to protect your threats. And you have the biggest creatures in Legacy. The whole deck is very synergistic. You also get to play [card]Stoneforge Mystic[/card]. The equipment is very good in this deck. You generally have multiple creatures in play and Jitte can easily take over a game. You also can play [card]Sword of Fire and Ice[/card] to attack through [card]True-Name Nemesis[/card].

Yeah, and [card]Batterskull[/card] is also pretty strong at stabilizing the game, right?

It’s because I’m not as devoted to the Stoneforge plan. With only two Stoneforges, you draw the Skull without the Forge a lot more often. It sucks paying five mana to play [card]Batterskull[/card]. I want all of my cards to be good on their own, not just when I tutor them up. I’ve played four Stoneforges before, and in that deck, Skull is generally very good.

What are some of Maverick’s worst matchups?

Generally, the turn-one combo decks are a big problem. You don’t have any way to interact with them when they go first. Decks like Belcher and Sneak and Show can go off so fast and there is no way to beat their god hands. Generally, the only way to interact with them on turn one is [card]Swords to Plowshares[/card] and [card]Wasteland[/card]. If you make it to turn two though, you can usually be okay. You gain access to Thalia, [card]Qasali Pridemage[/card], and can have an active [card]Deathrite Shaman[/card]. All of which are very good in their respective matchups.

Maverick isn’t doing anything busted. If another deck has a very good draw, it is difficult for Maverick to win. In the Swiss matches, my only loss was to a Jund deck that cast [card]Punishing Fire[/card]. I just couldn’t stop it and he was able to kill all my guys.

What’s your favorite card in the deck?

That’s a tough one because the deck feels so cohesive. All the pieces generally work off each other to make the deck really powerful. My favorite card is always changing. Right now it’s between Thalia and Knight of the Reliquary.

Thalia is really good against all the combo decks and also really good against RUG Delver. Most of their deck gets hit and it basically doubles the casting cost of everything in their deck. I really like making [card]Brainstorm[/card] cost two. Thalia is so good that when I draw a hand against an unknown opponent and it doesn’t contain Thalia, I often think hard about whether the hand is a mulligan or not.

[card]Knight of the Reliquary[/card] is also very good. This deck plays [card]Wasteland[/card], so once you resolve Knight, you can start turning all your lands into Wastelands and just make it so your opponent can’t cast spells—all at the same time as growing Knight. Knight is also very good against [card]True-Name Nemesis[/card]. Generally your knight grows so large that they have to hold their TNN back. They can’t race your 10/10. Knight also lets you tutor for [card]Gaea’s Cradle[/card], if you need a lot of mana say for your equipment, or lets you get [card]Karakas[/card].

Is there anything you would change from your winning decklist?

I would cut an [card]Ethersworn Canonist[/card] for another [card]Zealous Persecution[/card]. They are both good against Elves, but Persecution is good against Delver decks and kills [card]True-Name Nemesis[/card]. It also blows out Death and Taxes. Other than that, I liked the deck that I played.

What was your favorite moment from the tournament?

It has to be my top eight match that was captured on camera. The board was me with an active [card]Mother of Runes[/card] with a [card]Sword of Fire and Ice[/card], and a summoning sick [card]Mother of Runes[/card]. I cracked a fetch on my turn to play around [card]Stifle[/card], but it put me to three. He had three [card]Nimble Mongoose[/card]s that all had threshold. He attacked with all his guys. I played [card]Zealous Persecution[/card]. I was able to block two Mongooses, save the non-active Mother, and go to one. He was left with only one sad, lonely goose and I was able to win from that position.

Whats your favorite thing about Magic?

I love competition. Magic is like basketball that you play with your mind.

Patrick Sullivan tweeted that you were the first D-1 athlete to top eight an open. Are you?

As far as I know. Probably. Anyone else out there, hit me up.

Some people are saying that you brought Maverick back, did you?

Well there you go: a quick look at the inner workings of the GW deck of Legacy. Have a question about the deck? Sound off in the comments. Have a cool story about Legacy? Leave it in the comments. Also a D-1 athlete that top eighted a large Magic event? Leave your story in the comments. Thanks for reading, everyone.

@RyanArcherMTG     -     Email     -     Articles Ryan Archer is a PTQ grinder and a Magic financier. When he's not making top eight in a tournament or looking for the next card to spike, he's playtesting as a member of Team RIW or writing articles for BrainstormBrewery.com or MTGinfosource.com
Previous Episode:
Brainstorm Brewery #99.5 – Raw & Uncut (Ep.39 Digitally Remastered)
Next Episode:
Forced Fruition Episode 9: Black Sheep Wall

3 comments on A Legacy Interview about Maverick, SCG Open Top 4