A Unified Theory of Commander

Commander is a complicated game. Despite being a “casual” format, the massive pool of playable cards, multiplayer politics, and varied expectations of what constitutes the “Spirit of Commander” can make trying EDH for the first time quite intimidating. The trouble finding sound advice on how to build and play a deck online doesn’t help the situation much for new players either. While veteran players in places like the EDH subreddit are happy to share their knowledge of the format with new players, their advice is often complicated, contradictory, and overly specific.

It’s no surprise then that new players often turn to a preconstructed product like the recent Commander 2013 decks or to copying a list they find online to get started. It often takes months of trial and error, adding and subtracting, and lots of long, difficult games before a player begins to understand what their deck really wants to do, let alone what cards are actually effective at helping them have fun and win a few matches along the way. This steep learning curve inspires some players to improve, but also drives some players clear out of the format.

Contrast this to any thread where a player asks for advice on how to draft for the first time. Veteran players virtually trip over each other to be the first to post the BREAD system for drafting. If you aren’t familiar with the system yourself, it provides a basic framework for how to draft an effective deck no matter what three packs the players are cracking at the table. It goes like this:

B is for Bombs – The first thing players should be looking for are cards that win the game. These are powerful cards that are difficult for opponents to deal with and usually either win the game immediately or put the player so far ahead that the opponent has little chance of coming back.

R is for Removal – After game winners, players need cards that remove or otherwise disable powerful creatures and other troublesome permanents played by their opponents.

E is for Evasion – Creatures that can fly, are unblockable, hexproof, or are otherwise good at pushing through damage are said to have evasion. While these cards don’t usually win the game themselves, they can put a player well ahead if left unanswered.

A is for Aggro – Aggressive cards are usually cheap or undercosted creatures and spells that let a player race ahead in damage.

D is for Duds – Usually the last few picks in any pack are the “bad” cards in the format, or at least the ones with very narrow utility. Pick these last, but look for cards in your colors that might provide a good sideboard option in a specific match-up.

No matter what set a player might be drafting, he or she can generally follow this advice and find success in an event. Each time the player picks up a stack of cards, whether its a “pack one, pick one” moment or the dregs of the third pack, evaluating the available picks using the BREAD system sets a player up for success. Of course there are other nuances to drafting, like knowing when to force a particular deck archetype or how to signal your picks to the table, but these additional elements are dependent on the player first applying the BREAD system effectively.

So why is it so easy to communicate a basic theory for drafting, but so difficult to offer sound advice on how to play Commander? Why can a five-letter acronym start any player off at Friday Night Magic, but building your first deck for a casual game of EDH requires multi-thousand word essays to explain? Some might argue that the complexity of the format demands this much detail. Others will suggest that since there is a wide spectrum of expectations for the format that fall somewhere between the casual “House Rules No Counterspells, No Attacking Until Turn Ten” and the cutthroat  “Stax Lockdown No One Plays But Me” playgroups, that any general advice is essentially meaningless.

I disagree. I believe that if you break Commander down into its constituent parts and examine every deck that successfully creates fun and interaction at the table, you can assemble a list of rules for EDH deckbuilding and playing that are as simple to learn and apply as BREAD. Whether you are building a casual squirrel tribal deck for laughs or assembling a competitive Animar list for a local tournament, I’d like to suggest a Unified Theory of Commander that can help inform your decisions both during deck construction and while you are slinging spells at the table.

While I don’t have an acronym like BREAD for you, I do have a mnemonic device to help you remember the theory. Repeat after me: 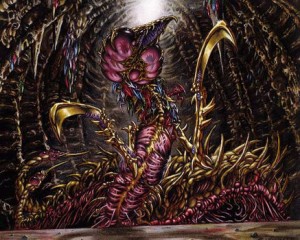 No. I’m not advocating you do a little stand-up comedy in a brood pit. I want you to remember the five letters MDTAS in that particular order. My Deck Tickled A Sliver. MDTAS. Got it? Good. Now let’s learn what it means:

Why is the order important? Because I believe that understanding the ordinal value of each of these elements can help players make good decisions about how to assemble a fun and functional EDH deck. Applying this theory to both building and playing a deck will cut down on the more frustrating parts of learning Commander and help new players start enjoying games more quickly. It might even teach a few veterans a thing or two as well.

So let’s do a brief introduction to each element of the theory.

Whether a player is attempting a [card]Hermit Druid[/card] combo deck meant to win every match (and lose all his friends) or a group hug [card]Phelddagrif[/card] deck with zero win conditions, playing cards in Magic requires access to mana. If a deck does not produce enough mana to reliably cast its spells, then the deck does not work. You cannot play the game without mana.

This may seem like a truism, but its a fact that is often lost on new players. They often run too few lands in their decks and when presented with the choice of adding a mana rock or another cool threat, they pick the threat. Unfortunately, that often means eight-drop game-winners end up as dead cards in their hands because they are stuck on six mana. So no matter your commander, your colors, your deck archetype, or your goals, the most important part of any Commander deck is access to mana.

Volumes of work have been written about how to define card advantage in Magic and not all accounts agree, so I won’t try to summarize or compete with the various arguments here. All you need to know for the purposes of this introduction to my Unified Theory of Commander: more cards is good. Fewer cards is bad. So drawing cards is one of the most important things your Commander deck can do.

Imagine for a moment that a game of Commander is a shoot out. Your hand is your gun and the cards in your hand are your bullets. The more bullets you’ve got access to, the more shots you can take and the more likely you are to start hitting your targets and eliminating threats. So run cards that reload your hand and keep you in the fight.

Brace yourself for another truism everyone: You must resolve threats to win a game of Commander. You need to play your cards to actually play the game, right? But what do I mean by threats? I mean cards that can win the game for you quickly if they go unanswered. Whether that means a giant creature, combo pieces, or an explosive spell, each deck should run enough game enders to make sure it can reliably have an impact on the board state in each game.

Now before players that pilot decks with goals other than winning the game grab their pitchforks, remember that for most players, the object is to win the game. So a threat is usually defined with that objective in mind. If you are piloting a deck with the goal to keep the game going until everyone has to concede and go home, then a “threat” means something different for you. It means a card that advances the mission of your deck.

This is perhaps the easiest element of my Unified Theory to explain, but potentially the most contentious part for new and casual players to swallow. Commander is not a four-man solitaire game. So even if you are running a theme deck with only a single, complicated win condition, it is not the responsibility of the rest of the table to let you play solo until you finally get that game ender online. It does not violate the spirit of Commander to interact with your janky deck.

It’s important for each deck builder to consider what removal options are available in her colors and which permanent types might be a problem. For instance, a monoblack player will likely need to consider some colorless options for removing enchantments. Do your homework and make sure your deck can respond to the win conditions other players drop on the table. Even a group hug deck needs to occasionally consider tucking someone’s commander to keep the game rolling and execute a political path to victory.

The lowest ranked item on my list is perhaps the most discussed topic in any deck building thread. When a new player asks for advice online about getting into the format, the responses tend to be chock-full of suggestions about picking a commander and filling the deck with synergistic cards. But take a quick glance at the rest of my list and perhaps you’ll see why that’s a trap. Focusing on synergy can tend to make players overvalue cards that do not develop access to resources, threaten to win the game, or deal with the threats of others. Most sinister about this problem is that the synergy between cards can make the deck feel pretty good in certain instances, leaving players without a gut understanding of why its being ineffective.

Picking cards that synergize well with a commander must be less important than these other elements. Synergistic cards don’t matter if you can’t play them (lack of mana), can’t get them into your hand (lack of draw), can’t threaten to win the game (lack of power), or respond to the game plans being executed by other decks (lack of answers). Players have been advising each other to build their decks in reverse order. No wonder the format feels so difficult to understand.

Now you might have noticed that I didn’t include specific cards in this article. That’s because I didn’t want to distract you by talking about details. Like BREAD for drafting, the Unified Theory of Commander should be card agnostic. It’s a universal system that you can apply to any deck. But have no fear. I’ll be diving deep into each element of the theory in future articles. We’ve laid the foundation with My Deck Tickled A Sliver. Next we can start looking at what those tickle-fingers look like in practice.

Jason is a creative director in the video game industry. When his crippling Commander addiction isn't consuming his thoughts, money, and free time, Jason can be found hiking the beaches, hills, and forests of California or climbing mountains in Utah. If you'd like to contract him as a writer or designer, he accepts payment in the form of EDH staples. He can also be followed on Twitter at @jasonthinks.
Previous Episode:
The Divine Aristocrats
Next Episode:
The View From 10,000 Feet

17 comments on A Unified Theory of Commander