Andrew Colman – The Puzzle Box: A New Take on Starting a Cube

Here we are again with an introduction to a new series. If you didn’t read my last article, allow me to introduce myself. My name is Andrew Colman, and I live in Winnipeg, Manitoba, Canada, just a few hours north of the North Dakota border. If you did read it, you’ll know a bit more about who I am and a lot about my experience brewing beer.

I’d like to establish the goal of this column right off the bat: I want to build a more affordable cube for people who are just starting out in the format, but don’t want to play janky cards like [card]Quirion Dryad[/card] as a replacement for [card]Tarmogoyf[/card]’s two-drop slot in green. I plan on doing this a wee bit differently than your standard “budget cube” build. This is going to be an experiment, so feel free to let me know how it is going at any point during the process. The goal of this cube is to keep the same play experience whilst spending significantly less money.

Let me spoil the [card]Tarmogoyf[/card] replacement mystery for you right now: there isn’t one. If there was, then it wouldn’t be as bloody expensive as it is. So with that in mind, how is it, you ask, that we are going to get the same play experience of playing this cube, as a regular cube, for less money, without [card]Tarmogoyf[/card]?

Let me answer the question I just asked on your behalf with another question. Have you ever drafted a cube and had [card]Tarmogoyf[/card] not show up in any packs? That’s kind of the point of having a cube larger than the size of your regular playgroup, so you don’t see all the cards all the time. This is the key concept we’ll be working with here. We are just going to cut [card]Tarmogoyf[/card] from the cube. In fact, we are going to cut many cards, as we are going to be building a cube that is only large enough for a six-man team draft: 270 cards. And just to be clear, we are not going to be foiling at any point. There will be price restrictions on this project, so I will happily choose a card that is heavily played or gold bordered if it means the difference between inclusion and exclusion from the list. The focus of this list will be play experience at all costs. I do include some gold-bordered cards in my own cube, and also have a whooped-ass copy of a Beta [card]Earthquake[/card] that I got for $12. I say all this to point out that I will not be choosing cheaper cards for this project than I would for my own cube.

Let’s start with some cube basics and then move on to some number crunching. The first thing we need to establish is from which list we are going to work . Now, I would use my own list, but I favor more of a “modal” feel to my cube, meaning I like having more dials to turn during game play as well as having some unknowns. The list that we will be working from will be wtwlf’s list discussed at length on MTGSalvation.com, which you can draft at cubetutor.com.

A few words on why I chose this list: first of all, it is probably the most widely discussed list on the internet for better or for worse. If you want to know why a card is in this list you need only to go to its forum thread and search it and you will be sure to find out why. Another reason is because it is really tight. Meaning, each card has a purpose and outside of archetype supporters there are very few fringe playable cards. (As an aside, there are lots of fringe cards in mine, mostly because I love how [card]Mul Daya Channelers[/card] plays, even though I understand it is not a tier-one card.) Some archetypes won’t make it into our list because they barely have enough support in a 450-card cube, so in a 270-card cube there would be no way to bring it together.

Archetypes are one thing that we are going to need to address closely as per the aforementioned issues. The artifact theme will probably end up being cut, mostly because we won’t be playing Moxen. We also can’t have the Tezzerets taking up space in our blue sections if they are not grabbing free mana or making free 5/5’s. These are just a couple examples, but we will address all of this in more detail later. I think a smaller, more focused cube will make for a much cleaner playing experience.

In our model cube there are 60 cards per color which equals 13.3% of the total cards which gives us 36 cards per colored section to work with. To give you an idea of how I’ll keep the archetypes consistent and balanced, I’ve done up a little spread sheet setting out the number of cards per CMC and archetype. I am no mathematician so if there is something a little wonky about the numbers let me know. 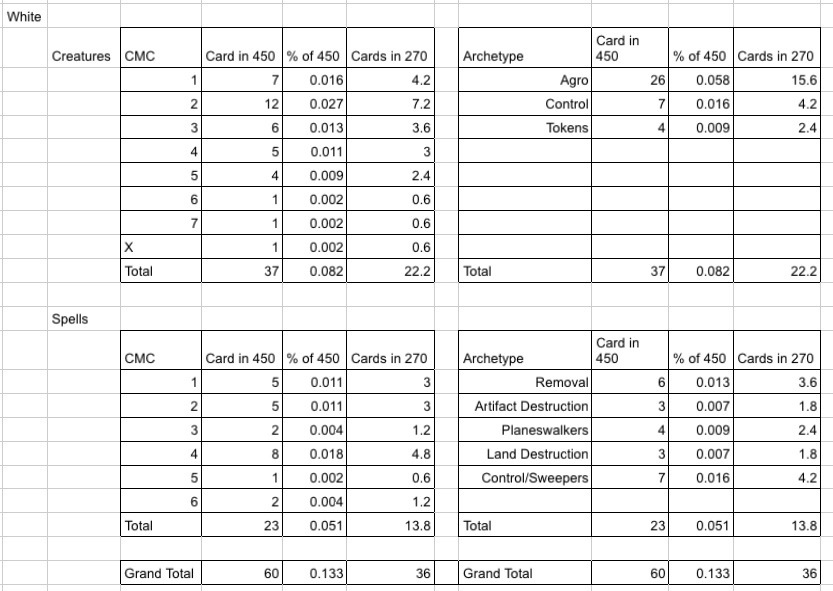 Theoretically, if we have the same density of one-drop white creatures we should be able to draft the same quality of white weenie deck.

The idea behind this type of build is that it is a starting point. My personal cube has [card]Tarmogoyf[/card], [card]Dark Confidant[/card], [card]Jace, the Mind Sculptor[/card], [card]Liliana of the Veil[/card], and other expensive cards. I think they are important to the overall experience of the cube format, but I don’t think they should be a barrier to entry. We’ll start by getting an initial list together, and from there it’s up to you to use the financial knowledge you’ve learned from the Brainstorm Brewery podcast to get those money cards without having to shell out.

Okay, let’s do a poll. How should we structure the limitations of the dollars being spent on the cube? Note that I have intentionally not determined the total cost of the model list because I don’t want to be biased towards a higher or lower number. Help me determine what to spend below, and we’ll start building next time!

3 comments on Andrew Colman – The Puzzle Box: A New Take on Starting a Cube