Welcome back, everyone! It’s been a while since I’ve actually written a finance article that revolved around buying and selling actual Magic cards. Last week I was on break for Christmas, but if you listen to the Brainstorm Brewery podcast like you should, then you’ll have heard my beautiful voice berating my personal sub-hosts Ryan Bushard and Corbin Hosler. While I was on the cast, I talked a bit about bulk rares during the Finance 101 section. If you’ve been reading this column for as long as I’ve been writing it, you’ll know that I pepper in the phrase “bulk rare” into almost every article I create, but I’ve never really dedicated an entire week to talking about what exactly constitutes a bulk rare, what you should be doing with them, or why they’re some of my favorite investments in Magic.

Let’s start by trying to create an exact set of conditions for what constitutes a  true “bulk rare.” I’ll grab a random rare from my alphabetized box and analyze it: [card]Labyrinth Champion[/card]. It’s a four-mana 2/2, already expensive for a body, but it requires additional investment to gain any sort of value. There’s zero Standard demand, close to zero EDH demand, and Theros, up until recently, was the most-opened Magic set of all time. Due to these facts, Labyrinth Champion has a TCGplayer mid of $.24, and there are currently zero buylists on the Trader Tools app that show interest in purchasing the card. If you took the card to SCG, ChannelFireball, or several other large stores at a Grand Prix, they would offer you a flat $.10 cash for the card as long as it was English and in Near Mint condition. On rare occasions, you’ll find dealers aggressively buying bulk rares for as high as $.11 to $.13, but that’s about it. True bulk rares can often be noted by the fact that they have a price of $.49 on SCG’s website. 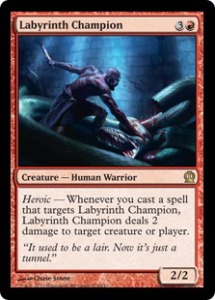 The most this card has ever done for me is teach me how to spell “labyrinth” correctly on the first try.

On the cast, I talked about certain cards having a TCGplayer mid price of close to $1.00, but their buylist price not reflecting their supposed retail value. [card]Ash Zealot[/card] is currently a great example of this, because it has a TCGplayer mid value of $.80, and an SCG value of $.75. While I didn’t have a name for these at the time of the recording, I’d like to consider them “fake” bulk rares. While you can’t even get a dime on a buylist for a card like [card]Chandra’s Phoenix[/card], people who trade using the retail price will offer closer to $1.00 for the card, allowing you to get rid of it in exchange for more liquid assets. You can trade for multiple “true bulk” cards, quadrupling up your cash value from $.10 to $.40, or you can trade the “fake” bulk rares for a different dollar rare, who’s buylist value is approximately half of the $1.00 TCGplayer mid price.

Lastly, there is an entirely different category of cards that often get bulked off to me that shouldn’t  be treated as bulk at all. These are cards similar to Ash Zealot or Chandra’s Phoenix: previous Standard staples with prices that didn’t decline after rotation, even though it’s assumed that they had. [card]Dreadbore[/card] is not a bulk rare, it actually has a buylist price of 80 cents. An even bigger surprise might be that [card]Thragtusk[/card] has a TCGplayer mid of exactly $2, and a high cash value of $1.35. Yes, that’s the same Thragtusk that was printed six trillion times in Event Decks, and barely sees occasional one-of play in Modern and Legacy.  It might seem tedious, but I highly recommend scanning through your piles of bulk rares every so often and checking if some still have some life left in them.

“You thought I was a bulk rare? Just who the hell do you think I am?” – Swagtusk

Why Do I Care?

Bulk rares can serve any number of different functions, depending on what the size of your collection is and how you tend to work toward your different outs. If you tend to trade more than you sell, and if you hate the prospect of dumping your copies of [card]Heartless Hidetsugu[/card] to a vendor en-mass for a dime each, I highly recommend separating them entirely from the rest of your trade binder, and creating an organized bulk rare box for the casual players in your community to dig through. I personally have multiple $.25 boxes that I throw all of my true bulk and fake bulk rares into, and they have an extremely high success rate for both new and experienced players finding cards that they can’t wait to jam into 99- and 60-card decks alike. It works out for everyone, because the people that find the fake bulk rares remember them being $1.00, so they get a great deal at 75 percent off, while I get to liquidate the stuff that’s not going anywhere else.

If you want to keep this box appealing, I recommend combing through and eviscerating all of the completely unplayable bulk rares, and shipping those to a dealer separately. While [card]Myr Battlesphere[/card] is an adorable bomb that fits perfectly into multiple decks, [card]Vizzerdrix[/card] and [card]Goblin Hero[/card] are not. No casual player is going to want these, unless they’re trying to collect 800 copies of the worst cards in Magic for style points. Pull out anything that seems like it doesn’t have a home, and try to ship off cards that you have more than four copies of. While I consider [card]Tower of Fortunes[/card] to be an amazing bulk rare in ramp-heavy EDH decks, I don’t need 15 copies to fill the goal of supplying everyone who needs one.

If you truly don’t mind going through your entire collection with a microscope, you can find some bulk rares that have randomly high (high is subjective here) buylist prices. Some true bulk rares happen to have a store looking to purchase them for upwards of $.25, and you can squeeze every single possible penny of value out of all of those dregs of Standards past. While I don’t recommend this if you value your time extremely highly, it’s probably fine to check the semi-playable bulk rares if you already have a large buylist process preparing to be shipped to multiple different stores.

Although I don’t buy cards to speculate on anymore, being able to buy bulk rares for $.10  is a great way to speculate on a low-value card without the risk of having to resell for less than you bought it for. During the Block Constructed Pro Tour where [card]Prognostic Sphinx[/card] was a hit, there were a number of community members suggesting it would be a strong card to spike post rotation in a control shell where it could act as a finisher. Instead of going out and risking $.50 to $1.00 a copy, I simply stashed them away while I was buying bulk rare lots instead of throwing them into my quarter boxes. I currently own more than 20 copies of the card, and while it hasn’t panned out exactly the way I wanted it to, there’s always the ability to bulk them back out for anywhere between $.10 and $.13 each at the next Grand Prix I attend. 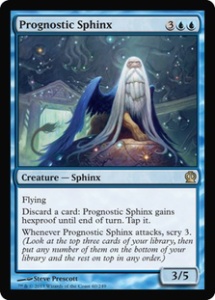 How Do I Buy Bulk Rares?

A lot of you probably read that last paragraph and are now going to ask me the question: “But DJ, how do I buy bulk rares for $.10 when the cheapest available copy on TCGplayer is $.35 plus shipping?” The answer to this question is similar to my methods of buying bulk common and uncommons: there are very few Magic players who care about owning large amounts of bulk rares that they’re not currently using, and many players are willing to turn these [card]Drakestown Forgotten[/card] from their Conspiracy days into actual cash, or trade them up towards useful cards that they’ll actually play in Standard.

While I’m going to add my usual disclaimer of, “Please don’t try this at your LGS without discussing the policy with the store owner first,” I’ve learned that many local card stores don’t want to deal with buying bulk rares and taking the time to sort them, similar to bulk commons and uncommons. Just let them pick out what rares they want to bulk to you, and kindly push back the [card]Felidar Sovereign[/card] that they think is a bulk mythic at $.25. Let them know the real value of cards that are ridiculously out of the range of true bulk, and you’ll have more customers in the long run. That reminds me: buy splashy mythics like [card]Necropolis Regent[/card] and [card]Essence of the Wild[/card] for $.25 from players who don’t care, and then resell them for $.50 to $1.00 to the casual crowd.

While bulk rares aren’t as exciting as finding the next hot Standard or Modern tech, they’re a consistent source of income that can keep casual players happy if you know how to work with them. You’ll always have cheap cards to help newer players into the game with, and you can occasionally hit a gold mine on cards you specced on for dirt cheap.

It feels good to be back with a real finance article that I feel proud of. If you have any comments, questions, or suggestions for next week, feel free to hit me up on Twitter at the link below. I’ll also be hanging around on Facebook, Reddit, and in the comments section. Thanks for reading!

@Rose0fthorns     -     Email     -     Articles Douglas Johnson is a 20-year-old MTG player who goes to college courtesy of a scholarship from Gamers Helping Gamers. He is currently found writing a weekly finance column at MTGprice.com, and you can always feel free to contact him on Twitter, Facebook, or Reddit.
Previous Episode:
Brainstorm Brewery #129 – Manifest Destiny
Next Episode:
Weekend Magic: 1/2-1/4 (with Discussion of Possibilities from Fate Reforged!)