Pro Tour Fate Reforged happened. While I know it was just last week, I don’t really want to talk about it. Well, I’m probably still going to talk about it, but I don’t want to do an identical analysis to what’s already out there. There will be several other articles out there for you to read that recap the weekend, in both the Magic financial world and in the Magic playing world. Our Brainstorm Brewery version of the weekend recap can be found here. If you had your ear even relatively close to the floor over the past several days, you’ve noticed that there were several price spikes with very little obvious rationale behind them. But I want to discuss something a bit more controversial that’s been upsetting the community recently, and that’s the legitimacy of each of the savage increases and decreases in price that have been occurring in the past few weeks.

Attached is a screencap of MTGstocks.com’s top Interests of the past week, sorted by percentage gains: 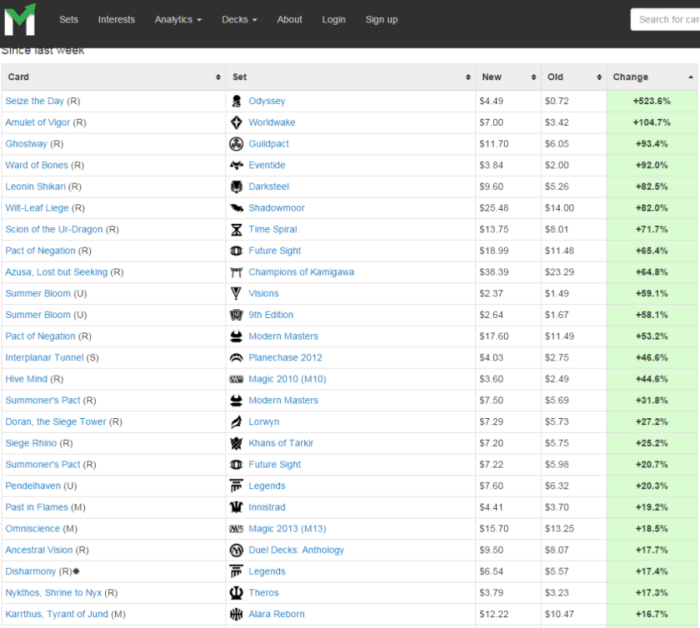 We know that the Bloom Titan deck showed up once in the top eight (and once more just outside of the top 16), and several of its pieces increased in price across the board. [card]Amulet of Vigor[/card], [card]Azusa, Lost but Seeking[/card], [card]Pact of Negation[/card], [card]Summoner’s Pact[/card], and [card]Summer Bloom[/card] all show up here as “winners” due to the fact that they are overall more expensive than in the weeks before the pro tour. However, does one single deck being in the top eight justify all of these crazy price spikes? The deck isn’t new, it’s been around for at least a couple of years. In fact, we can track the price of Amulet and see that this is the third time it’s done this. 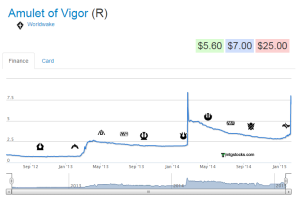 Although that picture says that the magic number is $7, you can be sure that it’ll creep back down to $5 relatively quickly, just like it did eleven months ago. The individuals who bought in at $4 or $5 will race to the bottom of TCGplayer’s low price, trying to break even or avoid getting stuck holding the burning ashes that used to be their imaginary “profits.”

Unfortunately, I have a theory that a growing number of Magic players see the pro tour more as an opportunity to make money while sitting at home in front of their computer, rather than as an event to watch for entertainment. On Friday and Saturday, they have their eyes on Twitter and their fingers on the mouse, ready to buy multiple copies of whatever card someone says “could be doing well.” I have a very hard time believing that all of the copies of Azusa, Amulet, and Pact of Negation that were purchased over the weekend will be sleeved up and jammed at events. The Amulet deck is touted as extremely hard to play—even Luis Scott-Vargas had some trouble with the deck’s lines during the event. Some of the hype has worn off already: Azusa hit an imaginary high of $50 during the end of the weekend, but has since crept down to $38, and will probably settle close to $35. 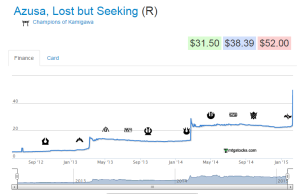 On the other hand, some of these spikes have nothing to do with the pro tour whatsoever. [card]Leonin Shikari[/card] happened to have fewer then 20 copies available on TCGplayer for $5 each, so it ended up being pretty easy for an individual to buy all of them and then relist them for as high as $12 each. Does that mean that a single person has the ability to change the price of this card to $12 permanently? Of course not. If you had checked eBay the day of the price spike, you would have seen that there were still multiple copies of the card available for its pre-spike price. Strikezone, Channelfireball, SCG, and hundreds of other stores exist for you to check. In fact, Magic Card Market (one of the largest European open marketplaces for MTG cards) still appears copies available for the pre-spike price, to this day.

The true demand for Leonin Shikari didn’t randomly increase drastically, it just happened to have a low supply on TCGplayer. That’s it. While several years ago it wasn’t believed that a single person could manipulate the market like this, this example is one of the most recent that shows that it’s quite possible, as long as you have enough people willing to buy into the artificial hype you’ve created for the card. If people think that Shikari is spiking because of Tiny Leaders, or because of some weird combo deck in Modern, you can maintain a higher post-spike price, and trickle out your copies for a higher profit.

The Truth about Buyouts

If you’re a normal player and not primarily a financier, I can feel your hatred from here. Financiers are evil, right? They buy out innocent Magic cards, and force the casual players to pay more for them in order to make a profit for themselves. Magic financiers are the [card]Tundra Wolves[/card] of the [card]Steel Wall[/card] [card]Street Sweeper[/card], and must be stopped.

As a matter of fact, not all of us are the worst human beings on the planet. While some people like this guy exist…

…they’re rare and far between. The majority of Magic financiers just want to either use the game to finance playing it themselves, or simply buy and sell cards without trying to manipulate the market. Just as there are scumbag cheaters in Magic, there are scumbags in Magic finance, and we want to do our best to get rid of them, because they give the good ones a bad name. Please don’t buy out TCGplayer just because it’s the most commonly referred to site for pricing cards. And please don’t assume that every person who dabbles in Magic finance has the intention of buying out TCGplayer.

Before I go for the week, I want to give an example of a card that has the potential to be bought out (please don’t go buy it out after reading this article). [card]Doran, the Siege Tower[/card] saw a decent amount of play at the pro tour, and is very powerful and popular in the rapidly spreading Tiny Leaders format. He’s from a set that’s pretty old at this point, and hasn’t had a reprint on a mass scale as of yet (he has an FTV and Champs promo printing, but neither of those are exactly substitutes to the cheaper Lorwyn copies).

There are fewer than 40 copies on TCGplayer and only 20 sellers, so it’s possible for someone with a fat enough wallet to decide that the artificial price sticker on Doran needs to go up, to justify after the fact that he saw some play at the pro tour. If you’re interested in picking up any number of copies to play with, I recommend that you get into them now, so you don’t have to bite the bullet at a future date. While buyouts of a particular store are real, they very rarely maintain their peak price, and will be available for cheaper in the days afterwards.

There’s a high likelihood that  you’re reading this article because I posted it on the /r/mtgfinance subreddit, or the /r/mtgmarketwatch subreddit, like I do every week. Recently, there’s been a bit of a controversy as to whether or not these subreddits have the power to tamper with the prices of cards when “spike” or “buyout” threads are posted. While these types of threads were banned from /r/mtgfinance due to an obvious ability to manipulate the prices of stupid random cards like [card]Fist of Suns[/card], the marketwatch subreddit allows them, as long as there is explanation as to a possible reason that the card is being bought out.

Now, there’s a discussion being raised that the lack of aggressive moderating on /r/marketwatch is causing the same trend that happened with Fist of Suns. We recently saw [card]Ghostway[/card] spike to over $15 due to hype of a brand new Modern deck, but the deck didn’t even end up performing very well. However, the buyout happened, and Ghostway will likely be stuck somewhere between its pre- and post-spike price. This ends up hurting the EDH and casual players who just wanted to flicker a bunch of allies or soul sisters.

However, I want to assure everyone that no one person has the ability to completely manipulate the market. Financiers can’t make bad cards spike with sheer dollars and willpower. If we could, there’s a high probability that copies of [card]Seance[/card] would be $5 each right now, and I would be buying a much nicer car. As you’ll often see me mention on Reddit or in my other articles, I tend to avoid speculating, only occasionally buying a couple sets of a card for fun.

Full disclosure: my pro tour speculation purchases are listed below.

That’s it. I didn’t try and buy out Azusa, or Ghostway, or Leonin Shikari. It’s not worth it to me, because almost everything I buy is at buylist prices anyway. There’s a lot more to be made in having a consistent cash flow of collections, singles, and value trading. I’d much rather have my name be clear of this buyout brigade nonsense, as well as my fellow writers at BSB. I can only try and reassure you that all financiers aren’t evil, and that there are good people out there who just want to try and help you play the game we all love and care about.

I can’t believe that this is my 50th article here on Brainstorm Brewery. I want to thank everyone on the site that allowed me this opportunity, and I want to thank all of my readers for sticking with me (through the good articles and the awful ones). I’m still a bit young and trying to get better at writing every week, so every bit of feedback and all your suggestions help me a lot. Thanks again!

@Rose0fthorns     -     Email     -     Articles Douglas Johnson is a 20-year-old MTG player who goes to college courtesy of a scholarship from Gamers Helping Gamers. He is currently found writing a weekly finance column at MTGprice.com, and you can always feel free to contact him on Twitter, Facebook, or Reddit.
Previous Episode:
Casually Infinite – About the MTGO Closed Beta with Chris Kiritz, MTGO Business Manager
Next Episode:
Brainstorm Brewery #134 – Sure. I Don’t Hate It