I advised my readers in my previous article that acquiring mana was a big deal in Commander. As it turns out, it’s such a big deal that I wasn’t able to contain it all in one post. After we published the first piece, so many comments, questions, and (gasp!) criticisms came pouring in that I felt like a follow-up was warranted. 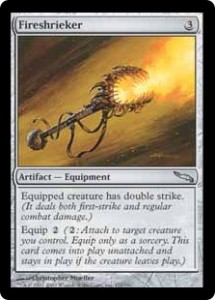 Now equipped to our mana discussion

The first point I want to clarify is the difference between order of importance and order of operations in our Unified Theory of Commander. As I said last time, editing an EDH deck is a process, and so is applying the MDTAS system to effectively build and improve a deck. Mana is first in the order of importance. A deck is dead in the water (there I go with the boat analogies again) without access to the mana necessary to cast cards. So it simply has to come first in importance while deckbuilding.

This doesn’t mean that a player will lock in her mana sources before she adds any other cards. And it certainly doesn’t mean she won’t come back later to edit the mana sources according to the other cards that ended up in the deck. This where the Order of Operations is applied. Expect that mana will likely be both the first and the last steps in any deck building process. No wonder it ranks so high in importance.

The second point I want to clarify is how to add extra cards to the sample size portion of a hypergeometric calculation when accounting for mulligans. I noted in the last article that a friendly mulligan may allow you to see up to seven additional cards at the start of the game, inflating the sample size used to hit your critical mana by quite a bit. Also recall that I said I try not to rely too heavily on that number. Why? Because it assumes that I saw zero lands in hand out of my first seven and grabbed a fresh seven off the top to find my land drops. That rarely happens in practice, so the “additional seven” figure is overly optimistic for our system. Always assume fewer than that when doing your mana calculations that include mulligans or just leave them out entirely. 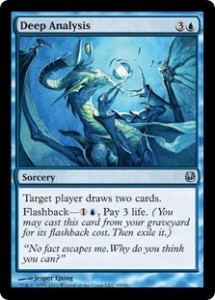 So in practice, how should you mulligan? I believe that for most decks, it’s best to mulligan aggressively for lands and cheap sources of card draw. Yes, [card]Elesh Norn, Grand Cenobite[/card] is a fantastic card for closing out games. She also costs seven mana and if you are looking at a one-land hand, its better to shuffle her away and go digging for lands. After all, it is an EDH deck. It probably has another bomb or two to draw into later.

The discussion on mana rocks also appears to have touched a nerve with quite a few players, so let’s take a moment to expand on that topic. In particular, readers wanted to debate about the value of “fast mana” like [card]Sol Ring[/card] and how cheap, artifact-based ramp leads to explosive, game-breaking starts. For instance, a [card]Jor Kadeen[/card] deck that opens with a [card]Mountain[/card], into a [card]Sol Ring[/card], and then a [card]Boros Signet[/card] is in a prime position to run away with the game, isn’t it? Absolutely. That deck also better be prepared to face the combined wrath of the table if it doesn’t win before the other players all get some answers in hand. 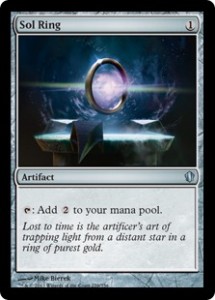 A format staple for a reason

Fast mana from [card]Sol Ring[/card] and its kindred can be an incredible leg up for decks that want to run fast and hot, but it doesn’t fully shield the player from the consequences of running so far ahead so fast. As I mentioned in my last article, those artifacts are vulnerable to removal and they don’t replace themselves. So leaning too heavily on them can be a kind of all-or-nothing play, especially if the removal-heavy player sitting at the table doesn’t appreciate taking 12 damage before he even played a single creature.

So its important to have balance in any multiplayer deck that isn’t specifically utilizing the artifact ramp strategy as a win condition. It’s also useful to look for mana rocks that provide some additional value, utility, or synergy once on the battlefield. [card]Darksteel Ingot[/card] is indestructible and produces mana of any color—that’s value. [card]Mind Stone[/card] can be used to draw a card once artifact ramp becomes unnecessary—there’s your utility. And Everflowing Chalice can be kicked multiple times to multiply existing ramp into an even bigger spell the following turn. That’s synergy, and it also leads us into our final follow-up topic.

Mana Flood (And Other Aquatic Puns)

As much as I discussed having enough mana in the previous article, I neglected to discuss what to do about having too much. It wasn’t really fair of me to discuss “mana screw” without also addressing “mana flood.” Neither situation is fun and both generally stem from the same lack of consideration during the construction of a deck. Doing a little bit of math can go a long way to improving both ends of the mana problem spectrum.

So how much mana is too much? The “too much” threshold is going to be different for every deck, but generally it means that a deck has exceeded its time to critical mana threshold and continues to have a high probability of drawing mana sources rather than threats and answers—cards that advance the goal of the deck.

To illustrate, let’s think back to my friend’s Omnath deck from the last article. Assuming that he heeded my advice and added about three more mana sources to his deck, he can now expect to consistently hit his six-mana threshold by turn six roughly 80 percent of the time without aggressive mulligans. So assume we’re measuring games where Omnath is actually able to stick, protected by [card]Whispersilk Cloak[/card] or [card]Asceticism[/card]. What are the chances the deck gets flooded instead of mana screwed?

[card]It That Betrays[/card] is at the top of the deck’s curve with a mana cost of 12, so we’ll assume that’s about the maximum amount of mana the deck wants to see in the early turns. In about 20 percent of the games where Omnath sticks, the deck will still end up with 12 mana sources online from its pool of 44 by the tenth turn. So one in every five games, the deck is going to be particularly heavy on mana and have only drawn into five to six other playable cards. If its pilot draws into [card]Dictate of Karametra[/card] or [card]Unravel the Aether[/card] at this point, the deck starts to feel a little anemic despite the massive pool of mana available. All the mana in the world goes to waste if there isn’t anything awesome to spend it on.

So what should a deck that relies on early ramp do to make sure to improve its draws? Well, one solution is to draw a lot of cards to go find the threats necessary to advance the game, but we’ll be covering card draw and threats in the coming weeks (they are the D and T of MDTAS), so let’s set that aside for now. An immediately relevant answer, and one our Omnath example deck does pretty well, is to provide “mana sinks” that can take maximum advantage of all that excess mana. That’s where cards like [card]Everflowing Chalice[/card] come into this discussion again. Mana sinks are cards that get better the more mana is available to “sink” into them, or at least those that have a repeatable effect where excess mana can be spent for value.

A great example of a mana sink in the Omnath deck is [card]Wolfbriar Elemental[/card]. If an Omnath player is sitting on a huge store of excess green mana and top-decks this particular threat, he is able to pay any amount extra to create a massive army of 2/2 wolf tokens. [card]Hydra Broodmaster[/card] is another great sink in this Omnath deck. My friend recently activated it to put forty-seven 47/47 hydra tokens into play. Is that Timmy enough for you? 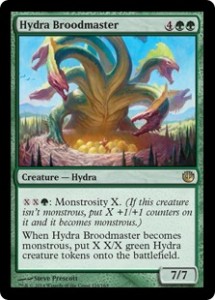 Of course, the other colors have mana sinks available as well. Black is notorious for fantastic X-costed spells like [card]Exsanguinate[/card] to sink its excess mana. Blue has X-costed draw spells, red has X-costed burn, and even white gets into the game with token producers such as [card]Sacred Mesa[/card] or [card]Decree of Justice[/card]. Quite a number of powerful commanders in the format have these types of abilities as well. [card]Oona, Queen of the Fae[/card], [card]Memnarch[/card], and [card]Sliver Queen[/card] all immediately spring to mind.

Once a deck has access to enough mana, make sure to do a little math to make sure it isn’t sitting on too much as well. If the deck relies on early ramp or requires particularly high critical mana points to succeed, make sure it’s also running effective mana sinks to keep excess mana from going to waste. The more the deck wants to ramp, the more necessary those mana sinks become. This editing process will take time, but it doesn’t have to be scary or frustrating if deck builders are aware of how to diagnose the mana problems outlined in these articles.

So despite the fact that mana is first in our order of importance, you really don’t have to give up and play green to be effective in Commander. Every color combination has access to the mana necessary to succeed. Every mana problem has a solution. So pick a commander that speaks to you and then make sure your deck has all the resources it needs to succeed.

Jason is a creative director in the video game industry. When his crippling Commander addiction isn't consuming his thoughts, money, and free time, Jason can be found hiking the beaches, hills, and forests of California or climbing mountains in Utah. If you'd like to contract him as a writer or designer, he accepts payment in the form of EDH staples. He can also be followed on Twitter at @jasonthinks.
Previous Episode:
The Spike Feed Episode 40 – If I Die, Don’t Let Dustin In
Next Episode:
Conjured Currency #16: “Lik Dis If U Buy Evertim”