Welcome back to Serum Visions. I’ll waste as little time as possible getting into the meat of the topic of how beer is made, but first I need to talk a little bit about why it is important to know.

The more you know about something the more appreciation you can have for it. After you have gone through the struggle of doing what ever it is you’re learning, you realize how profound the simple result of any complex process is. For example, until you have won a Pro Tour you will NEVER understand what it takes to get there. But, you can gain a better appreciation for it by learning about the process, and thus whenever you partake in an action that could lead to a Pro Tour win, you can better understand what it is you are actually doing and how much deeper it goes. 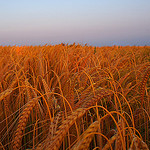 There are many types of grains that can go into beer, but the main one is barley. There are two main differentiations that a brewer needs to be concerned with at this point. There is brewing grade barley and feed grade for livestock. Brewer’s grade, as we’ll call it, has a larger kernel and has a lower protein content than feed grades. This aids in the conversion of the starch to sugar and also contributes to the clarity of the beer.

To the Malting Room 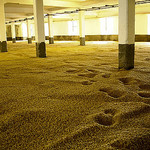 Once the barley has been harvested it goes through a malting process, this produces malted barley. You’ll have a good idea of what malted barley tastes like if you have ever had the candy called Maltzers. Anyways, essentially what happens here is the grain is hydrated and left to rest in a temperature/humidity controlled room where the kernel or seed starts to germinate. The germination is stopped just before the kernel sprouts by drying the grain to 2-4% humidity with a process called kilning: it is commonly referred to as a malt.

At this point once the grain is dried out it can now be used as a base malt, which means it can stand alone as the main source of sugar for a beer.

If however the kilning process is not stopped at 2% humidity the grain will dry out further and actually start to toast resulting in what is called specialty malts. As this happens the grain takes on an infinite number of characteristics depending on the level of toasting. The lighter toasts will add mild malty flavours and a little sweetness. The longest kilning will result in a malt called black patent malt which is black as night and will add ashy, coffee, burnt flavors to your beer. You would use this very sparingly! Again, the variations and characteristics are infinite!

Into the Mashtun We Go…

The next step is putting your grainbill or mixture of base and specialty malts together and then crushing the grains to just the right size. Once crushed, the now-called grist goes into the mashtun. For home brewers this is often an insulated cooler or an old keg that is being heated by a burner or element. During the mash the malted grains are soaked at a very precise temperature – anywhere from 148 to 158 degrees depending on the type of beer – for an hour give or take. What happens in the mash? The enzymes that were left behind from the malting convert the starch from the base malt into sugar. As for the specialty malts, the mash extracts the flavors and special compounds from them that help with things like head retention and body. After the starches are converted into a sugar called maltose and absorbed into the water, you then drain that water into your boil kettle. The water that contains the sugar from the malt is now called wort, pronounces wert.

Boil It Up and Add the Hops! 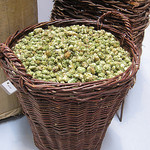 So now that the wort is in the boil kettle you turn up the heat and get it up to a strong rolling boil. There are a few reasons why we boil, the first and most important is it sterilizes the wort, and the second is to get from the hops the properties and characters we want from them. It only takes about fifteen minutes to sterilize the wort but a boil is normally an hour long: this is almost always due to the hops.

So what is it that the hops do? First, hops are a very strong preservative. Before they added hops to beer, it had a very short shelf life and spoiled quickly. They started adding hops to help with that, and thank God they did! Hops have generally three additional uses other than preserving the beer: they add bitterness, flavor, and aroma. The length of time that a brew gets boiled determines what part of its profile gets used. If it gets boiled for over 45 minutes, all of the volatile aromatic essential oils disappear and most of the flavor compounds get boiled away as well. Left are the bittering compounds from the hop called alpha acids that have been isomorized! Hops that are in the boil for half an hour or so leave their flavor compounds, and the ones that are only in the boil for 10 minutes or less are the ones that contribute to the aroma. All of the amounts and timings for adding the hops to the boil is called the hop schedule.

Cool It Down and Add the Yeast 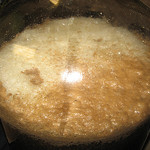 So here’s an interesting legal bit of kit. The second you add the yeast to your wort it is considered beer. Don’t ask why… it just is.

Yeast has to be the most wonderful ingredient of this whole process. It is what finally turns this bitter sweet mess into the glorious bubbly, boozy thing we call beer. What does that yeast actually do? Well, it is a living organism that loves to eat sugar and multiply! When you add or pitch the yeast into the wort it actually just starts eating the sugar. And what do living things do when they eat? They digest, produce, and remove waste. They produce and remove two different things, alcohol, which impairs your judgement, and carbon dioxide, that which carbonates the beer in bottle-conditioned beers. It does produce some other things but for our purposes this is good enough.

There are two main types of yeast, ale yeast and lager yeast. The largest difference between them is that ale yeast ferments at room temperatures or higher, and lagers ferments at just above freezing. They produce drastically different flavors and characteristics. Lagers are a very clean fermenting yeast and produce little in terms of yeast character, while ales can produce very robust flavors that most often lend themselves to the final character of the beer.

The second to last step is getting the beer into a container that will eventually lead to your glass. The two most commons ways of this happening is via keg or bottle.

After the yeast is done eating up all the sugar it goes to sleep at the bottom of the fermenter and you are left with a non-carbonated or still beer. There are two ways of carbonating a beer, the most common way is by force carbonation, where they basically set up a giant soda stream and pump the right amount of carbon dioxide, sometimes nitrogen, into the beer. Once this is done, it can be put it in a keg or bottle and sent on its way. The second way is bottle carbonating. This is where a little extra sugar is added to the still beer before it goes into the bottle or keg and the yeast wakes, eats it up and the carbon dioxide it produces is enough to carbonate the beer.

The Final Destination: Your Glass 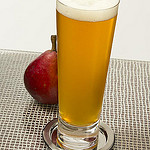 Glassware is a fantastic thing! It will most certainly get it’s own article one day. But as a brief starter, which all of this whole thing has been, glassware is a big deal. Different shapes will disperse the carbonation faster or slower, hold aroma differently, or allow the heat from your hand to warm the beer at different rates. Shakers, the most common bar beer glass, are only good for certain types of beers that want to get flat faster compared to others, and thus you should not drink a pilsner out of a shaker. Alas, I would never turn down a good beer offered in the lowly shaker.

Well there you have it: grain to glass! I skipped a lot a lot, but that will be a good base from which to start. Leave some comments and let me know what you think!

Style of the week: Pilsner

I am starting with the most accessible beer for our good friend Corbin. Budweiser is an American pilsner. We are going to seek out a Czech pilsner, the most common one being Pilsner Urquell or Czechvar. I do have a disclaimer, both of these are BMC (BudMillerCoors) beers but they are good versions of the style. If you can, find a local version of a pilsner. Chances are it will be a little different but still very accessible to a primarily-BMC drinker. When you try it, look for a slight hop character that is a little bit grassy and spicy, the flavour will be slightly grainy and a little bitterness, the mouthfeel will be creamy in the beginning and crisp on the end. If you have only had Bud, try them side by side and you will never go back.

Thanks for hangin’, more beer stuff coming in a couple weeks!