These last couple of weeks have been spoiler season for us. As far as Cube goes, it’s been fairly slow going. [card]Brimaz, King of Oreskos[/card] is a snap auto-include in a cube of any size. Sadly for the Puzzle Box, it’s a bit out of our price range. [card]Courser of Kruphix[/card] seems pretty good, and after the presale prices have receded to their normal levels, I think it’s got a pretty good shot at getting into the Puzzle Box list. 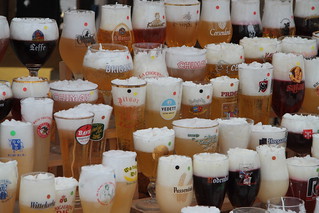 However, we are not here to talk about Cube, but rather, beer. As I said in the introduction article to this series, I’ll be trying to take inspiration from the community for these articles. There is no spoiler season in the beer world…yet. But what this makes me think of is how excited the brewers of the MTG world get over new cards.  These brewers get to look at all 13,000 existing cards in light of the new ones day by day. This led me to the think about how brewers of beer and decks alike have individual methods which they can apply to later brews or new cards.

It was this fundamental method that inspired me. We all have our way of setting things up and getting to the brewing process. It is a lens that we have that we see all things through. Some things will work for one person and not for another because our lenses are all different. For many home brewers, that lens is often our setup, how we actually make the beer, and what kind we like. For instance, if a home brewer has a temperature-regulated freezer, he then looks at ingredients as having the possibility of being a lager. Those without that equipment simply can’t brew that type of beer. A home brewer who makes his beer as strictly a cost-saving method will view a $13 packet of wet yeast as strictly worse than a $2 packet of dry yeast. On the contrary, for someone like myself, who is not really concerned about drinking a lot of beer, but instead enjoys the adventure of tasting and trying new things, that $13 packet of yeast looks pretty damn good.

But where we all need to start is with method. How do we actually make the beer? I’m going to try and help you to figure out, if you don’t already know, which type of brewing method is right for you.

Each process I’m going to describe is a clear level up from the one previous. From can to kit, the quality of the beer increases dramatically. From kit to steep, the variation levels up drastically. From steep to partial mash, the complexity takes a giant leap forward. And from partial mash to all grain, the process, control, and complexity are increased tenfold. With each level, the quality of the beer get better. However, it is necessary to note that it is not unheard of for a partial mash or even a steeped beer to win competitions. It’s not as common (for a multitude of reasons), but it is very possible! Keep that in mind when you are trying to figure out how to start making your own beer.

This method is one step forward, two steps back. And since this is step one, you end up in the negative. I would suggest just skipping this step. But for the sake of completion, I will not ignore it. What you do is crack a can of hopped malt extract and add it to a carboy. You then add a few pounds of white sugar to get your desired alcohol content and top up with water and pitch the yeast.  The one step forward is that you actually are required to add something extra, other than water, to your carboy before you pitch the yeast. If you choose to go this route, make sure the sugar you add has been boiled for 15 minutes and cooled before you add it to the carboy. There may be some nasties (technical term for bacteria that can cause an infection) in the bag of sugar. The two steps back comes with the fact that this beer is terrible! I could go on a bit of a rant about this, but I’ll contain myself. But if you’re curious, hit me up on Twitter @awcolman and we’ll get this party started!

This is the most simple of all methods of making beer.  It is basically the same as making wine. You buy a large box full of highly concentrated wert, put it into a carboy, and top the carboy off with water. Add your yeast, which will be provided with the kit, and let it ferment. Bottle it up, wait a few weeks, and consume.

This is a really great way to get started. You get pretty good beer at the end of the process and you get to learn the flow of how fermentation and bottling works. If you have never made your own wine or beer I recommend you start here.

Here we have arrived to what I would call home brewing. Up until this point, we have  been making beer at home. As I said, I think you should start with a kit, so my intent is not to demean that method. But with the steep method, you actually get to start adjusting what your beer is going to taste like, thus making it your own.

This is also the first time we get to talk about setup. Up until now, we have only needed a funnel, carboy, and a separate vessel from which to bottle.

Using the steep method, you are going to need a pot and a heat source, probably a stove element, but there are other options. Armed with this pot and heat source, you are game to start making some really awesome beer!

How this method works: take your specialty grains (refer to my article Grain to Glass if you need some help with the jargon) and you add them to a pot that is full of cold water. You can either have them in a mesh bag or add them straight to the water and strain them out later. You then turn on the heat and remove the grains when the heat reaches 170 degrees Fahrenheit. Let the pot get up to a boil, then start your timer for 60 minutes. During this time, add your hops according to your hop schedule. At the 15-minute mark, add your malt extract after you have taken the pot off of the element (so you don’t scorch the extract). Bring the pot back up to a boil for another fifteen minutes. Once this is done, you need to cool the beer off as fast as possible. This may take up to an hour.  Once the beer has cooled to the right temperature, add the wert to the carboy and top it up with water. Pitch the yeast and proceed as normal.

You will most likely be making a five-gallon batch of beer but if you are using this method you probably do not have a five-gallon boil kettle. When we are talking about pots, size matters. You are going to want the biggest one your stove can accommodate. I live in an apartment with an apartment-sized stove, but luckily for me, the large element is pretty powerful. It takes about forty-five minutes for my three-gallon pot to come to a boil. This is a decent sized pot for doing stove-top brewing. If you need to go smaller, I would not go below two gallons because you’re going to be adding around two liters of malt extract at the end of the boil. It will boil over and make a huge mess if you don’t have ample head space in the pot. Also, the high concentration of sugar at the end of the boil will inhibit the hops from imparting their full character.

In the next installment of Serum Visions, I’ll cover partial mash, which will include both the cooler and the brew in a bag (BIAB) method. I’ll also discuss all grain brewing in its many forms. Also, we’ll look at a new invention that functions kind of like the Keugrig or Tassimo of the beer world.

I would say that if you want to start brewing, you are now armed with enough information

to get started. Pick one of these two methods—the can doesn’t count—and find your Local Home Brew Shop (LHBS) and tell them what kind of beer you want to make and the method you want to use—they will take it from there! You may also want to pick up Charlie Papazian’s book The Complete Joy of Home Brewing to get a more detailed look at what is going on.  Start with one of these methods. Don’t wait for the next article, just go do it now! If you choose the right style and plan properly, you can even be ready to bottle by the time the next Serum Visions is published.
As always everyone, thanks for hangin’. And go make your own beer!