Last week we started from the absolute basics, but this time we are going to jump to the furthest reaches of craft beer, the extreme eisbeer beer movement.

As I said previously, all of the posts from now on will be inspired by the MTG community, and I would be remiss to look past the #MTGOpocalypse! The end of Magic as we know it…looks like WotC has killed Magic again! Part of me wonders if there is a running joke in the pit where the personification of WotC is the card [card]Zombie Infestation[/card]. Because it seems like the repeated situation is that a negative action results in a huge benefit for WotC because the change is structured correctly. I don’t know, it’s just a hypothesis, and probably a bad one at that. But enough preamble, here we go!

Question: What do Snake Venom, The Bismarck, Penguins, and the Apocalypse have in common?

They all either are, or have been, the strongest beer in the world at one point or another. The weakest of all the previously-named beers is Tactical Nuclear Penguin, by the brewery Brew Dog in Scotland, weighs in at a massive 32% ABV (alcohol by volume)! Before we get into the exciting rivalry between the Scots and the Germans over the last few years, we’ll talk about how you get beer up to such a ridiculous alcohol percentage.

You may remember from my previous article that there are two main types of beer yeast, the first being lager and the second being ale. The most robust of these yeasts will only be able to ferment up to around 10-11% alcohol – and this is really pushing it – until the alcohol content becomes too high and the yeast just stops working (read: gets pass-out drunk). After the ale yeast is done fermenting to its capacity, brewers will use champagne yeast. This will dry the beer right out and push the alcohol up to around 16% if there is enough sugar left for the yeast to munch on. This is still a far, far cry from 32%.

In order to increase the alcohol content even higher, brewers use a process called freeze distilling. This works because alcohol freezes at a lower temperature than water. So at just the right temperature, the water turns to ice but the alcohol stays liquid. Once this slushy state has been reached, they separate the two. For Tactical Nuclear Penguin, the brewery does this process a number of times until they get to their target alcohol percentage. 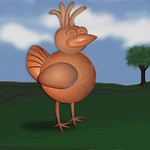 I’m not sure which came first, the chicken or the egg, nor am I sure who made the “strongest beer in the world” claim before this madness got started, but it was Schorschbrau who was the first to strike back.

Schorschbrau is a German brewery that only makes Eisbeer. They retaliated against the Tactical Nuclear Penguin with a beer called called Schorschbock35, at a whopping 35% ABV. Brew Dog would then make a beer called Sink the Bismarck! (sic) at an outrageous 41% ABV. We have now gone above the standard spirits (like vodka and rum) alcohol percentage of 40% ABV. Schorschbrau quickly bounced back with Schorschbock43, at 43% ABV, continuing what I’m dubbing The Battle of Ridiculosity. There is a bit of a note to be made here.

Tactical Nuclear Penguin was a stout that was barrel aged for 18 months before it was put though the freeze-distilling process. This ensured that it had a full and round enough flavor profile to stand up to the much higher alcohol content that was intended for it. In the later parts of this war of high-booze beers, the response beers from each brewery were coming out faster and faster. I haven’t tried any of these beers, so I can’t say for certain, but I think that the shorter time frame might be at a bit of a sacrifice to the beer’s integrity – more on this later.

The battle does not end with Schorschbock43, though. Brew Dog fought back, but this time they were set on putting an end to it all, and thus they named their beer The End of History. The end of History is a beer pushed into the range of what actual distilled alcohol is when it comes from the still: 55% ABV. That it is just absolutely insane! We are well above spirits level at this point. But wait, it’s not even over here…

Brewmeister, another brewer from Scotland, decided to play God and show us that there was life after life after death. So they threw their hat into the ring and produced a beer at an “insert upper-limit adjective here” 65% ABV. However, apparently this wasn’t good enough, Brewmeister has announced yet a stronger beer called Snake Venom… are you getting bored yet? This beer is marked at 67.5% ABV. This beer comes with a big warning label on the neck of the bottle saying its dangerous to consume more than 35ml per sitting.

You may be wondering if these are still yet considered beers, and the answer is indeed, yes. Further pondering might yield the thought…are they worth drinking? Well if you take a look at all of these beers on ratebeer.com, you’ll find that the higher the alcohol percentage goes, the lower the rating. So I’ll put it to you: is there a point to all of this? I probably don’t need to express my opinion directly because I think it is fairly well laid out between the lines. 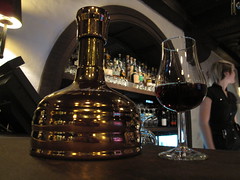 There is a light at the end of this frozen and refrozen tunnel, and I think it is appropriate that the beer is called Utopiasby. The Boston Beer Company from the good ol’ U.S.A. is responsible for this one. This beer is at a paltry 27% ABV but is not an Eisbock. This means that yeast, not temperature, did all the work, but how? To be honest, I’m not sure, but that’s not actually my point. The beer is a barley wine and it has been around for quite a long time. Where all of these other beers were made for the purpose of beating each other, this one was made to be beautiful. Some of the beers used during blending have been aged in the brewery’s barrel room for up to 20 years.

And there we have it. From beer basics last time, to beer ballistics this time. Who knows what it will be next time…maybe beer gymnastics or scholastics?

Style of the Bi-Week – Double IPA

Last week was pilsner, which is arguably the most accessible of respectable craft beers. If you are interested in a little bit more extreme beer, but still accessible, hunt down a double IPA. It will have a robust 8-12% ABV (which seems pitiful given the above beers) and if it’s a good one, 80-100 IBU’s of hoppy goodness. Most local craft breweries will usually have an offering at least seasonally. As far as tasting notes go, these can be all over the place depending on the hops and malts used by the brewery. Competition tasting notes are as follows:

14C. Imperial IPA: A prominent to intense hop aroma that can be derived from American, English, and/or noble varieties (although a citrusy hop character is almost always present). Most versions are dry hopped and can have an additional resinous or grassy aroma, although this is not absolutely required. Some clean malty sweetness may be found in the background.

The (self-proclaimed) holy grail of these beers is Dogfish Head’s 120 Minute Double IPA. If you can ever get your hands on it, snap it up and enjoy!