Hello and welcome to Serum Visions everyone
It’s been a quiet week in the MTG world it seems. Or maybe I haven’t been paying any attention. I was

stretching to come up with a topic that was related to the MTG world and my wife recommend to “just give them a good old history lesson.” I though that was a great idea but it needed to be inspired. I wandered over to the Mother Ship (Daily MTG) and there it was, [card]Black Lotus[/card], as the Card of the Day. That’s the hallmark beginning of the impressive history of our game.

The earliest beer has been a topic of beer scholars for around hundred years. They have found more than 800 paintings on the walls of the pyramids and had temples dedicated to the goddess beer. Home brewing was an everyday occurrence, and existed as sustenance for the people of the time. There were also major breweries alongside microbreweries. There were different styles, ingredients, and regions. So let’s dig in to some fun stuff.

The Gods and Goddess of Beer

As I think we can all remember from elementary school, Egyptians life revolved around the culture’s gods and the 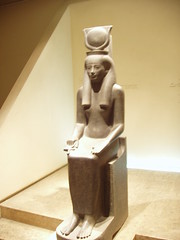 stories that surrounded them. Beer was no exception to this rule. It was believed that Dionysus was the inventor of beer. There is a somewhat contradictory story that reads that Dionysus actually fled to Mesopotamia because he was disgusted that the Egyptians enjoyed beer. Take from this what you will, it’s all here to say that the gods and beer were linked right from the beginning. If, however, Dionysus invented beer and somehow humans got a hold of it, we would need to be able to produce more of it. Since we are not gods who can just create things from nothing, we needed a process of making it: brewing. With that process came the goddess Hathor (see statue). She was the “inventress of brewing.” Another name that she carried was “the mistress of intoxication.” The temple that was dedicated to her was aptly named “the place of drunkenness.”  We then have another goddess associated with beer, her name is Menqet. She was often seen with Hathor and carried the name “the goddess who makes beer” and also “overseer of the brewery women.”

It is not a surprise, then, that the people who made the beer in this culture were the women. At home the women would have often brewed the beer as it may have been considered a task akin to cooking daily meals. Reasons for this might have been that beer was safer to drink than the water and it was also a source of calories and nutrients. They were not yet using hops to preserve their beer, so this home brewed beer would have been much lower in alcohol content. Therefore, it would not have been able to keep infections at bay for very long. So it would have been consumed very fresh, possibly as soon as the primary fermentation was complete. If the beer is only being made at two to three percent alcohol, it would only take a few days to completely ferment and would need to be consumed within a few days. It seems like it would not be unreasonable to say that they may have been brewing at home two or three times a week.

If you read my Grain to Glass post, you’ll have a good idea how beer makes into your glass. The process used in ancient Egypt, however, has been hotly debated. In the last thirty years, the argument has been distilled down into what we can actually discern from the information that’s left to us. The debate stems from a long artistic interpretation tradition of beer scholars. Scholars took art on the walls of the pyramids and used it to discern ingredients, processes, and other elements of the beer culture in ancient Egypt. These interpretations have led to some misconceptions, but it is now generally agreed that the beer was actually made from bread that had lots of yeast added to it. It was lightly baked and then stomped to break it up much like wine grapes. It would have been put into a large vessel for fermentation, then strained and put into a jar to be sealed for storage or transportation.

Wait a second, I just said that these beer would have been made every few days and drunk very quickly. But just like we have big breweries today, there were big breweries back then. Egyptian beer was produced at such high volumes that breweries were able to supply all the local demand as well as leave some left over for export. The most popular beer from Egypt would have been from a city called Pelusium. It was so popular, in fact, in later times it was exported to Rome. Ian Hornesly writes in his book what this exported beer might have looked like.

“The possibility exists that we are looking at an ancient equivalent or our much-exported “India Pale Ale” from the ninetieth century. Beer destined for export must have had some “keeping quality to them, maybe via a herbal addition. Maybe IPA actually signified ‘Imperial Pelusian Ale’ ”

This just goes to show that nothing is new under the sun. If a beer has to travel, it  will need to to last longer. The only way to achieve that is to increase the alcohol content and add a preservative. Maybe a history of IPA will serve us well in the near future. Something else that is not new is that people of all walks of life and time like variety. Egypt was also a big importer of beer. The most popular beer they imported was from an area called Qode from somewhere near Babylonia. This beer is important because it seems to be the first beer that was produced outside of its original region. Hornsely asks if it is the first instance of brewing under license, meaning that the demand was too big for the main brewery to handle so itlicensed the recipe out to other breweries to make up for its shortfall. However, I wonder if this is actually the start of the Anhiseir-Busch beer corporation lineage…

With all of this beer being brewed in Egypt and imported from abroad, you might wonder what it is that they did with it. Or maybe you don’t, drinking it seems like a fairly obvious answer, but that is only part of the story. Beer and bread were actually a means of payment for working certain jobs. One person might be paid four khar (ancient Egyptian unit of measurement) of emmer (a type of wheat) and 1.5 khar of barley per month. This works out to roughly 202 kilograms or 444 pounds of grain per month. The person being paid does not receive this as raw grain, but rather receives it in its processed form of beer and bread. To put this into some perspective, it takes around 10 pounds of grain to make five gallons of 4%-ABV beer. So, 444 pounds of grain will make you 44.4 five-gallon batches of beer. Each five gallon batch of beer yields around 55 bottles, so in the end you end up with 2,420 bottles of beer per month, or 80 per day. There are, however, a great number of caveats to these calculations, not all of which I will be able to discuss here. I’ll mention a couple, though, the first one being that one person’s wage would probably be feeding a whole household. It would also be fair to say that a given household might want some bread during a given month, which would cut down drastically on the amount of beer it would get, especially with a larger family. So after these, and still other, allowances have been made, it’s probably fair to say that a worker would earn about a six pack of beer per day. Not too bad if you ask me.

And finally I’ll end with a list of names that the Ancient Egyptians would have called the varying styles of beers.

Dark beer, Sweet Beer, Thick Beer, Iron Beer, Garnished Beer, Friend’s Beer. Beer of the Protector, Beer of Truth, Beer Which Does Not Sour, and Beer of Eternity. I personally want to try the Friend’s Beer and the Beer of Truth, which was drunk by the 12 gods who protected the Shrine of Osiris.

There’s much I have sadly had to leave out, but I’ll have another swing at the ancient Egyptian beer culture one day. Until that day, I’ll leave you with the main resource I used so you can go dig in for yourself if you’d like. The book is called The History of Beer and Brewing by Ian S. Hornsey, Published by the Royal Society of Chemistry in Cambridge, England.

Most of the beer, if not all, made in Egypt would have had emmer wheat in it. So if you can find an emmerwheat beer, try that. If not, then go out and try a local offering of a wheat beer! Tasting notes can be found here.
As always thanks for hangin’.
Andrew