It’s not that I’m a pessimist. It’s true that I recommend you mulligan like one when you play Commander, but I’m actually a positive person in general. I look forward to every new Magic set release. I pay attention to spoilers and get excited about cards that might fit into one of my EDH decks or inspire a new one. But when Mark Rosewater confirmed via Tumblr that we will be getting a new Commander set every year, I was suddenly very nervous for the future of my favorite format.

Don’t get me wrong. The last two sets of Commander decks did a lot of good things for the format. They brought down the price of staple cards such as [card]Sol Ring[/card] and introduced cards like [card]Chaos Warp[/card], which help mitigate color-pie weaknesses that can make for very lopsided games. The first set also introduced sorely needed wedge-colored commanders to make previously non-viable color combinations accessible and fun. So with all the good things the Commander sets bring to the format, why am I so wary of the next one?

Please don’t take this as a personal slight if you play Oloro. It’s not your fault Wizards printed the card or that you are attracted to the Ageless Ascetic as a player. I also want to emphatically note that I don’t think Oloro is unfair or objectively “overpowered.” I just think the card demonstrates really, really bad game design. 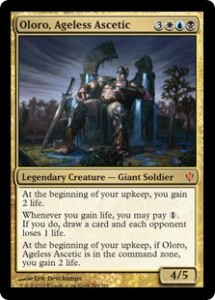 You could maybe dismiss the smallest problem I have with Oloro as a nitpick. The Commander 2013 decks, among other goals, are meant to introduce new players to the format. While Oloro seems to be pretty friendly to new players with all the free life he provides, he’s particularly unfriendly in that he creates a trigger that must be remembered every turn. It’s not a “may” trigger either, so not only is the card asking new players to remember the trigger, its suggesting the rest of the table does so as well.

My problem with Oloro goes a lot deeper than expecting the table to keep track of forgettable triggers. An incredibly important element of good multiplayer game design is that game objects shouldn’t add power without also adding gameplay. Oloro’s ability to trigger life gain every turn for absolutely zero cost breaks this rule in a particularly unfun manner. 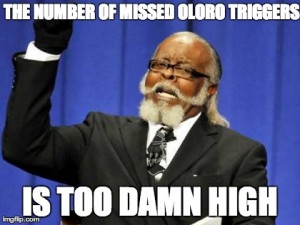 Why is giving players something good without asking them to pay a cost or perform a game action to get it a bad thing? Multiplayer games are generally at their best when all the players are treated as equals by the game rules and the outcome is measured based on all the choices the players are making over the course of the game. By providing power to a particular player without asking for anything meaningful in return, a game designer is essentially bending the game rules to give someone an advantage outside the context of player agency.

That might be fun for the player getting two life per turn, but the bent rules tend to create “net negative” fun in the overall game economy. The other players generally don’t enjoy that one Esper fellow getting to play with a slightly different set of rules than the rest of them.  And while Magic is a game of modifying the rules, those modifications almost always come in the form of cards, paid for by resources and in way that leaves room for other players to respond. But Oloro generally can’t be interacted with in the command zone, so he just sits there, bending the rules, providing power without gameplay and breaking a cardinal rule in good multiplayer game design.

The lack of interaction is where Oloro really fails both the opponents and the player at the helm of his deck. Most lifegain combos (or combos in general) require more than one card to execute and often those cards are of two different types. Any given deck might have a hard time interacting with one type of permanent, but might be well-equipped to deal with another. This makes combos tend to feel more manageable and certainly makes them more fun to play against. Oloro gets to provide some portion of these combos for “free” without asking a player to invest any game actions into getting him “online” and working as part of an engine.

In fact, its usually a bad idea to cast Oloro at all. Why risk your life gain engine getting tucked? Or hit with a [card]Darksteel Mutation[/card]? [card]Mind Control[/card]led? It’s too risky when you build your deck around the free power Oloro provides, and most players do just that. I’ve played dozens of games against Oloro decks and I believe I’ve seen him actually cast just one time. Ever. And all those players were completely justified in protecting their real source of power, even if it seems backwards to build a Commander deck that never wants to actually use its commander.

Of course there are a few ways to “interact” with Oloro, but they create net negative fun as well. Just cast [card]Erebos, God of the Dead[/card]. No lifegain until the Oloro player can deal with an indestructible enchantment. Seems good, right? You can also run [card]Rain of Gore[/card], [card]Leyline of Punishment[card], or [card]Sulfuric Vortex[/card]. These are all perfectly legitimate means of countering life gain. They also tend to completely hose Oloro players, particularly the newer players in the format who just wanted to build something fun around their life gain commander. These answers are not fun, meaningful kinds of player interaction.  Oloro being in a playgroup just tends to push the group in this direction.

I’m a game designer too. So I understand the good intentions that created Oloro in the first place. Wizards clearly wants to explore the design space opened up by the format’s existence. Cards like [card]Marath, Will of the Wild[/card], and [card]Prossh, Skyraider of Kher[/card], are actually a good examples of using the unique attributes of commanders to create fresh designs and new avenues for fun. Oloro was just the worst idea to spring from this exploration that also survived the development process. I can’t fault them for the attempt. I’ve certainly made mistakes developing my own games in the past. I just hope Wizards is paying attention and understands why Oloro was a swing and a miss. 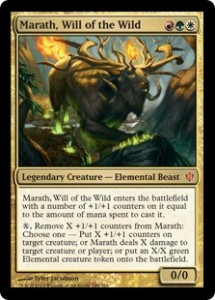 My precognitive abilities are telling me that the responses to this article are going to mainly consist of complaints about other commanders. Commenters will say “If you think Oloro is bad, you should try playing against X!” where X is Kaalia, Animar, Ghave, or whatever other legendary creature is currently a thorn in their sides. I’m just not that worried about those cards. Remember, this isn’t about power. It’s not even about a commander being annoying. It’s about designing commanders that encourage interaction and create net positive fun at your table.

While linear commanders like Nekusaur, with decks that virtually build themselves, aren’t that interesting to me, they do have a place in the format and help fill in certain niche roles that engage specific types of players. Oloro is a whole different kind of problem. “Styles of fun” aside, he’s designed to not ever be cast and to provide power that opponents can’t meaningfully interact with. Even if that is fun for a certain group of players, its not healthy for the format overall. I don’t believe any other commander-specific legendary creatures share that particular set of nasty design problems. Power without gameplay is fine in something like a single-player adventure game, but its toxic for a social format like Commander. 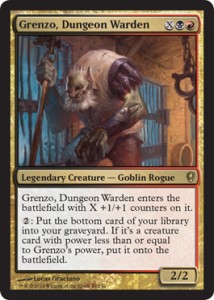 Dear Wizards: More of this, please!

Assuming the fine folks at Wizards of the Coast are considering these tricky design issues, I suppose I can dial the format anxiety down a bit. Until they prove they are willing to make the same mistake twice, I should probably just keep hoping for an affordable [card]Xiahou Dun, the One-Eyed[/card] reprint. If we get awesome, flavorful new commanders in the vein of Conspiracy’s [card]Grenzo, Dungeon Warden[/card], who explores one of those underused design spaces really well, then I’ll be incredibly happy with future sets. Until then, consider me cautiously optimistic and hopeful that someone from the mothership is reading my design rants. 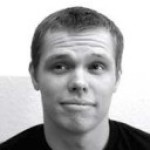 Jason is a creative director in the video game industry. When his crippling Commander addiction isn't consuming his thoughts, money, and free time, Jason can be found hiking the beaches, hills, and forests of California or climbing mountains in Utah. If you'd like to contract him as a writer or designer, he accepts payment in the form of EDH staples. He can also be followed on Twitter at @jasonthinks.
Previous Episode:
Immortal Constellation: A Historical Look At Standard Combo Decks
Next Episode:
Pitt Imps Podcast #73 – French Canada Invades