Welcome back, to another wonderful Thursday of learning how to make some spare change off of the card game known as Magic: The Gathering. During these next couple of weeks, there are going to be a lot of financial set reviews popping up. Should you sell this cool new mythic rare? Is $3 the correct price to preorder this other rare that you want for your EDH deck? What should you do with Narset upon release? Instead of doing one of those set reviews where I go through all of the rares and mythics of the set and predict what their price trends will be over a three, six, or twelve month period, I’m going to stick to one of my personal areas of expertise. I’m a lover of bulk commons and uncommons, and picking out the small treasures that end up being buylisted later for $.10, $.25, or even just given away to someone who is desperately looking for a set of a certain common at FNM. Keep in mind that these aren’t going to be listed on TCGplayer or eBay. We’re not making hundreds of dollars flipping these, because they’re the cards nobody else wants to deal with. These are the commons and uncommons that make us into my own version of an “FNM hero”, when the Spike grinder shows up with 73/75 cards for his Standard deck, and the LGS is completely out of stock of that last sideboarded uncommon.

While I’ve written about this subject before, it’s been a couple of months since I’ve touched on it. Dragons of Tarkir only has 88 out of 264 cards spoiled at the moment (according to mythicspoiler.com, my personal favorite site to keep up to date on the most recent spoilers), but there are a ton of common and uncommon picks in the set already that I can’t wait to scrounge out of discarded draft decks and pull from the large bulk lots that I enjoy buying. Let’s see what I’m going to be pulling these next few months! 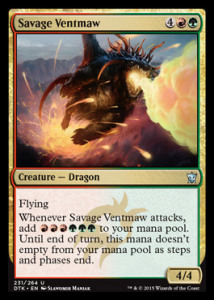 Out of the five uncommon six-mana dragons, this one is the only one I’ll be pulling out and setting aside to buylist later. This fat lizard synergizes pretty well with [card]Aggravated Assault[/card] in EDH, and I have a feeling that people who like playing a lot of fat monsters also enjoy attacking with them more than once. 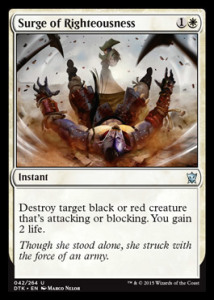 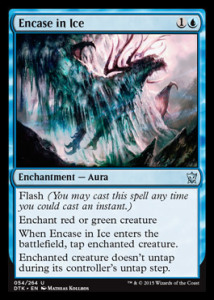 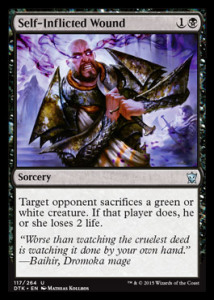 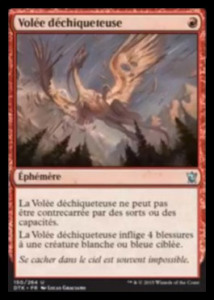 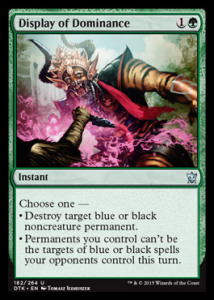 Every now and again, Wizards gives us a set of Standard sideboardable color hate cards. Think back to [card]Combust[/card], [card]Deathmark[/card], [card]Celestial Purge[/card], [card]Flashfreeze[/card], and [card]Autumn’s Veil[/card]. These all saw reasonable amounts of sideboard play during their times in Standard, and some of them even snuck into mainboards. Even if these only end up buylisting for a quarter apiece, it’s free money that you’re leaving on the table by not picking them. If you don’t buylist, treat them as a quarter a piece in trades in your binder, and grind up the value bit by bit. 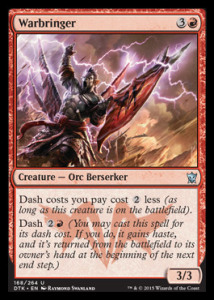 To be honest, I pick almost anything that reads “something something costs X less”. There will almost always be that one casual player who wants to make a “dash” deck, a “manifest” deck, or an “exploit” deck. Keywords are important for new players to latch onto and learn the concept of synergy, and you might be able to squeeze some value out of that by setting these aside for later. It’s not going to make it in Standard, but you’ll make someone’s day by having a playset of these at the ready. 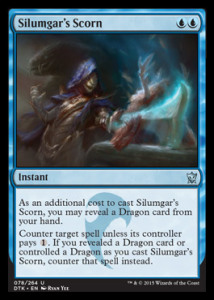 [card]Counterspell[/card] is back! Well, as long as you reveal a [card]Nameless Inversion[/card] or control a [card]Chameleon Colossus[/card]. That’s the hard part. But [card]COUNTERSPELL[/card] IS BACK!! Is it good enough for Modern or Standard? I’d hedge my bets on a no, but damn it all if people won’t try it out in the first few weeks. In my experience as someone who used to be a casual player and/or brewer, I wanted to break the meta in my own special snowflake way, and try out all of the weird synergies. Picking this loses you basically no money if you find it in bulk, on draft tables, or get it as a throw-in. 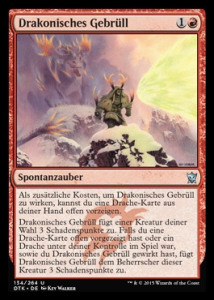 Similarly, there will be Johnnys and Jennys who want to make Mono-Red Standard Dragons a thing. We’ve got Dragon Tempests, we’ve got a Sarkhan that turns into a dragon, we’ve got actual dragons everywhere. Even if [card]Searing Blood[/card] is better, this one has the word “Dragon” on the card at least four times. Pull it out. 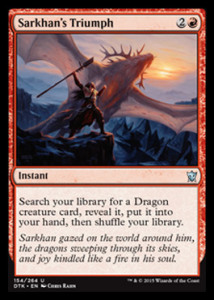 This is a great card to follow up Draconic Roar with, because it goes in the exact same deck, but also any deck playing a reasonable number of dragons. This goes into tribal dragon EDH decks, and is one of those uncommons that will be $3 a couple years down the road (unless they decide to reprint it to death like [card]Lingering Souls[/card]…). I think you’ll be able to get $.50 to $1 for these during the first few weeks after the set’s release. There’s a lot of dragons, and people want them in their hands (in game and in real life) now! 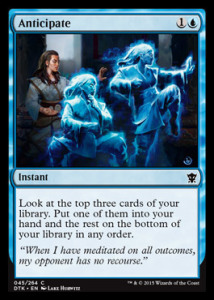 Did you hear that? No? How about now? That was the sound of every hardened control mage at your LGS furiously scribbling down a decklist that started with “4x Ancicipate.” The fact that it’s a common kind of sucks for buylisting purposes, as there will be plenty on the market for $.25 from large retailers, but that doesn’t mean you shouldn’t pick it out of bulk. Ship them as playsets on Pucatrade, and be the guy that has multiple playsets at the ready. If you can get $1 in trade for a playset, you’ll do fine. 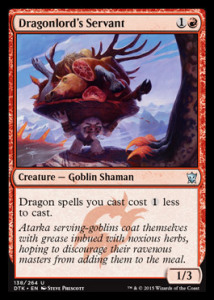 I was so happy when I saw this card. Not because I’m a fan of dragons (I’m not), not because the art is pretty silly (it is), and not because I’m going to sell an absolutely massive amount of these at $1 once I pull a bunch of them. Oh, wait, those are the reasons. There are multiple explanations as to why [card]Dragonspeaker Shaman[/card] is a $5 card, even with multiple printings. This thing is cheaper to cast and harder to kill. The biggest downside is that the obvious popularity will encourage more people to set them aside before their draft leavings or bulk lots ever reach my fingers. I don’t think this reaches $5, but $2 after rotation seems fine. Until then, I’ll keep them on my $.25 buylist for the competitive players in my area and wait.

Do you agree with my picks? Disagree? Has there been a sweet new card spoiled since this article went live that should get a special mention? While these aren’t the [card]Mastery of the Unseen[/card]s or the [card]Glittering Wish[/card]es of the finance world, they’re a lot easier to come across for a very low opportunity cost, and you have the ability to fill an important niche in your community by doing so. If you decide to buy a box of the new set, don’t just let the rares, mythics, and foils be the only cards you’re pulling out.

Have a great weekend!

@Rose0fthorns     -     Email     -     Articles Douglas Johnson is a 20-year-old MTG player who goes to college courtesy of a scholarship from Gamers Helping Gamers. He is currently found writing a weekly finance column at MTGprice.com, and you can always feel free to contact him on Twitter, Facebook, or Reddit.
Previous Episode:
Weekend Magic: 3/6-3/8
Next Episode:
Privileged Perspective 18 – DTK Preview Edition!