These last couple weeks have been pretty fun! I know there are at least a few of you who have been trying out the formats I’ve presented here. That is really flattering—thanks, guys! This week, I am going to be continuing of this meta-series (as Mark Rosewater puts it in his podcasts) of little-known Cube formats. This week I’ll be leaving the world of two-man formats and moving into four-man. This format is simply called “Twos.”

What is Twos and How Do You Play? 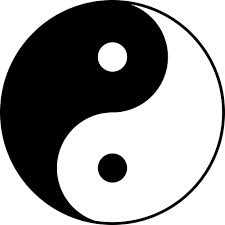 If you take a second to think about how fast the normal 1v1 cube environment is, you’ll realize that it is pretty fast. Two-power one-drops are an absolute staple, and as WotC continues to make better ones with fewer draw backs—like our dear friend [card]Carnophage[/card]—it is trending toward speeding up even further. Anything that costs five mana should be a game winner. Anything that costs six or more will require you to have a deck full of sweepers and counter spells, ways to ramp to it in the early parts of the game, or a plan on cheating it into play without paying its mana cost.

Now just take everything you just read, then remove any consistent expectation of blocking from the equation. Chances are good that either you or you teammate will not have a creature to block an opponent’s attacking creature, and if both of you do, the chances are equally as good that an opponent will have a way to clear the path.

Your valuation of cards changes drastically in this format as well. Here is a pack-one pick-one scenario that I saw a couple of weeks ago: the two cards in the pack that really mattered were [card]Skullclamp[/card] and [card]Guttersnipe[/card]. Snap [card]Skullclamp[/card], right? It goes in every deck with creatures and [card]Guttersnipe[/card] will wheel if you feel like playing that deck anyways…right?

Let me describe a late-game scenario that will show you the power of cards that specify “each opponent.”

It’s my turn five and I attack my opponent’s life total down to three. One of them does not have a blocker and my teammate has an army that only a sweeper could handle. We are 11 life. There’s a catch: the opponent to my left has a Guttersnipe out, three untapped mana and a single card in hand.

Spoiler Alert: Take a second to try and figure out what card that could be that would let them win on their upkeep. 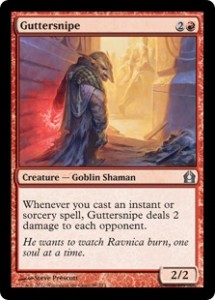 At the end of my turn, he plays a [card]Staggershock[/card] targeting my face for two. [card]Guttersnipe[/card]’s ability triggers and hits me for another two and then my teammate for two—that’s six damage for three mana at instant speed. [card]Staggershock[/card] then rebounds and domes us for another six, ending the game during my opponent’s upkeep. That is 12 damage for a total investment of six mana and two cards. This may sound like Magical Christmas land, but the guys that I have played with know the power of this card, so this Christmas scenario comes up often.

There is only one Twos list on Cube Tutor that I know of, and you may notice that some of the cards look pretty strange. As soon as you realize that all of those cards affect each of your opponents separately, and that teammates share life totals, those cards skyrocket in value! [card]Tithe Drinker[/card] is one of the best two-drops in the format because it attacks for two and drains the opposing team’s life total for two every time you extort, not to mention two life for you on each trigger. It’s not uncommon to see [card]Tithe Drinker[/card] lowering your opponents’ life total by four each turn it’s alive.

A cube list that is specialized towards playing Twos looks very different and tries to exploit speed and multiple-opponent effects. For instance, every cheap card with extort goes in, cards that are very good at blocking and stalling to get to the long game get cut. Cards like this would be [card]Wall of Omens[/card] and [card]Wall or Roots[/card], or anything that only blocks.

General value creatures that are above four mana need to be seriously reconsidered, and most likely replaced with a one- or a two-drop. Because of the higher concentration of X/1’s, cards like [card]Gut Shot[/card], [card]Lava Dart[/card], and even [card]Forge Devil[/card] become playable and often are key cards in a match.

You can, of course, use more of a standard cube and it will be just as fun. Just keep in mind the environment is really different.

In closing, if I haven’t conveyed that this format is a real blast to play, I’m afraid I haven’t done it justice! This is by far my most favorite way to cube. I like it better than 1v1 for sure, simply because of the team aspect of it. Trying to talk in code about whether or not to [card]Force of Will[/card] something, and then just giving up and talking about the cards in your hand, makes the mood really light and fun!

Alright, I’ll be back next week with substitutions for our current Puzzle Box list, but for now, give Twos a try! You’ll enjoy yourself immensely, I promise.

P.S. Shout out to PIDGEOT on Cube Tutor for letting me use his list as a reference. Here’s another link. 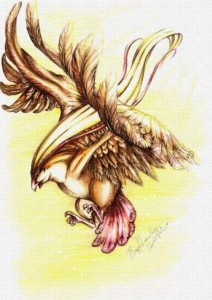