What kind of deck do you really want to build?

This question is at the starting point of every Commander deck, isn’t it? There’s no sense in building a deck that won’t be fun to pilot. So EDH players need to start with this question and then continually revisit it to make sure that the deck they actually build ends up being the deck they set out to play in the first place. Your own personal definition of “fun” is at the heart of deck building.

Revisiting “My Deck Tickled A Sliver”

So if threats are the starting point of every EDH deck, why aren’t they  the first element in the Unified Theory of Commander? Remember that order of operations is different than order of importance. You might pick your favorite cards to build around, but they aren’t ever really “threats” if you can’t get them into your hand or afford to cast them. So while the order of operations for deck building might dictate that you pick your threats first and fix your mana last, it’s important to remember that in order of importance, acquiring the resources that power your threats is most critical to building a deck that actually does its intended  job.

With our discussion on resource acquisition behind us, threats now become the hinge point for the rest of the theory. Understanding our threats helps us determine which mana sources to run and what kinds of card draw we need as the underlying framework for our deck. It also informs our decisions about what kind of answers to run and how we’ll edit our decks for synergy.

We discussed in our introductory article how focusing on synergy first tends to lead new deck-builders astray. The issue of synergy is probably the most contested point in the entire theory so far, so it’s important that we revisit it now that we’ve come to threats in order to bring a little more clarity to the discussion. Threats can absolutely synergize with each other, but synergy by itself does not constitute a threat.  So understanding how to differentiate between the two can tremendously improve your deck-building skills. 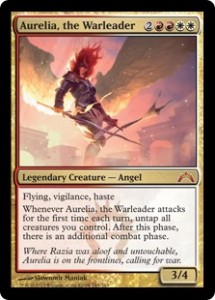 Go to war with real threats.

Let’s use [card]Aurelia, the Warleader[/card] as a tool for illustrating the difference between threats and synergy. Our fiery angel of the Boros Legion has an ability that creates extra attack steps, so a player thinking about synergy first will immediately consider creatures with  abilities triggered by attacking. Getting two activations of battle cry or battalion will absolutely seem exciting, powerful, and synergistic, but does that synergy necessarily “get you there” when the game is on the line? Does it create meaningful card advantage? Does it put enough pressure on the table to threaten to end the game if it goes unanswered? If not, it’s not really a great example of a true “threat.”

Consider the card [card]Warmind Infantry[/card] and how it synergizes with Aurelia. It gets +2/+0 when its battalion ability triggers, so with two combat steps, it has the potential to deal 10 damage on a single turn. Seems pretty great strictly within the context of synergy. That’s a quarter of an opponent’s life total by itself, potentially ballooning to more than half their health when you consider Aurelia and at least one other creature are attacking as well. It sounds pretty appealing to deal half of someone’s health on a single turn, doesn’t it?

So is [card]Warmind Infantry[/card] a good inclusion in your Aurelia deck? Probably not, unless you are building on a strict budget. Three toughness means it’s not likely to survive the first combat step in the first place, so getting a second combat step isn’t guaranteed. The synergy is often wasted right there. More important though, is that Warmind Infantry isn’t very good on its own. It doesn’t threaten to end the game by itself, so without Aurelia to power it up and an empty battlefield so it can avoid blockers, the card just isn’t going to provide enough value to really qualify as a meaningful threat in EDH. 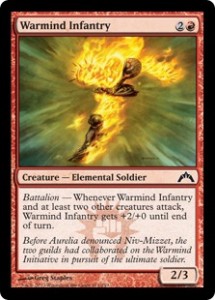 Not a threat. Sorry.

Now compare Warmind Infantry  to [card]Tajic, Blade of the Legion[/card]. Battalion givesTajic +5/+5, so Aurelia’s bonus attack step means Tajic can deal 19 damage on a single turn by himself, which is already almost double the synergistic value for just one white mana more. More important is that Tajic is indestructible, so not only does he hit harder, he survives every combat to hit his opponents again. He doesn’t need an empty battlefield to produce value, nor does he need Aurelia to begin being scary. Tajic demands answers all by himself and synergizes with far more cards to put pressure on the table.

Maybe it’s cheating to compare a common card to a legendary rare, but the hidden rule we’re trying to uncover with this illustration is sound. Synergy does not produce a threat all by itself. It can increase value and potentially produce card advantage, but it doesn’t actually define what your deck is trying to do. Synergy is the salt and pepper, but threats are the meat of the deck.

So how can we properly define Threats? How can a deck builder identify cards that are ideal to build around? There are a few key characteristics to keep in mind when selecting the right cards to lead your deck.

First, a true threat should threaten to end the game or eliminate at least one opponent if it goes unanswered. If we think back to the BREAD acronym for drafting, Threats are Commander’s equivalent to Bombs. They are powerful cards that apply pressure on your opponents and advance your own game plan. Flowing from this idea, we should also note that true threats should demand answers from your opponents. The table should not be able to safely ignore your key cards  in most reasonable board states. 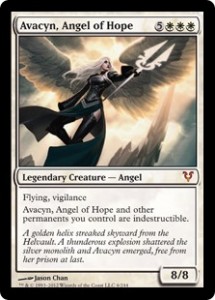 The second big idea to keep in mind is that your threats should either be very powerful by themselves or synergize in multiple ways with the rest of your deck to end the game if left unanswered. Playing an [card]Avacyn, Angel of Hope[/card] can be a threat all by itself. It’s an indestructible, vigilant, flying 8/8 that can put enormous pressure on the table alone. [card]Helix Pinnacle[/card] can also function as a threat in a defensive deck like [card]Angus Mackenzie[/card], although it may require a lot of synergy and protection to succeed. Finding a card that is both potent by itself and synergizes well with the rest of the deck is really the ultimate goal. [card]Avenger of Zendikar[/card] is good in just about any deck that runs green, but it’s astounding in a deck like [card]Hazezon Tamar[/card] that is built to abuse all those tokens in multiple ways.

Now that we know what really defines a threat, how do we go about picking the right ones for our decks? To answer this question, we really do need to go back and ask the question that started this article again: what kind of deck do you really want to build? Your threats should be selected in service of that goal.

Do you want to play Voltron? Then threats are the cards that either suit up your commander or are other creatures that can get powered up when your commander is unavailable. Potent equipment and resilient creatures become the threats that drive the deck towards its goal: turning a creature into an unstoppable combat machine.

What about combo decks? Their threats are the combo pieces that demand answers before they trigger a win condition that no other player can stop. So no matter how interesting or cute, cards that do not either set up the combo or protect it are good choices to get cut during the deck-building process. [card]Colossal Whale[/card] might be a big creature with a strong ability, but its probably not the best thing to draw when the game is on the line and your deck really just needs to hit its combo pieces. It’s not a threat. It’s dead weight. 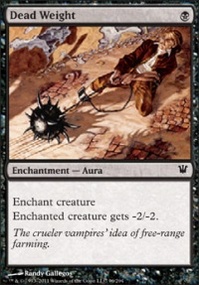 We can repeat this pattern with every deck archetype and commander in the format to narrow our choices for threats. During our discussion on card advantage, I suggested you ask yourself, “What value do I get for playing this?” Perhaps another question to ask yourself when evaluating threats is, “Does this card align with the goals of my deck?” Just because a card is good, it doesn’t mean it helps advance your primary game plan and win the game. Those cards need to get cut, however painfully, if you want your deck to succeed.

If there is nothing else we take away from the discussion on threats, it should be this: set goals for your deck before you start building. Once you know the deck you want to play, then aggressively build toward that idea and cut anything that doesn’t service its goals. This is more than synergy. It’s directionality.

You don’t build a house by picking a bunch of wood that looks nice when hammered together and seeing what comes out once you throw some nails at it. Maybe that’s art. Maybe it makes you happy sometimes, but it certainly doesn’t qualify as a house that meets the requirements of shelter and safety. Instead, you get a blueprint and build using that as the guide. Building against that blueprint results in a solid structure that can successfully house a family.

Likewise, an EDH deck shouldn’t be made by taking a bunch of cards that synergize and throwing them into a 100-card pile. That might feel good sometimes, but it certainly doesn’t result in a consistent deck that always feels fun to pilot. Instead, set some goals for your deck before you begin. Pick your threats based on those goals and your deck building skills will improve tremendously.

Jason is a creative director in the video game industry. When his crippling Commander addiction isn't consuming his thoughts, money, and free time, Jason can be found hiking the beaches, hills, and forests of California or climbing mountains in Utah. If you'd like to contract him as a writer or designer, he accepts payment in the form of EDH staples. He can also be followed on Twitter at @jasonthinks.
Previous Episode:
Weekend Magic: 10/10-10/12 (Pro Tour KTK Edition)
Next Episode:
Conjured Currency #35: My Story